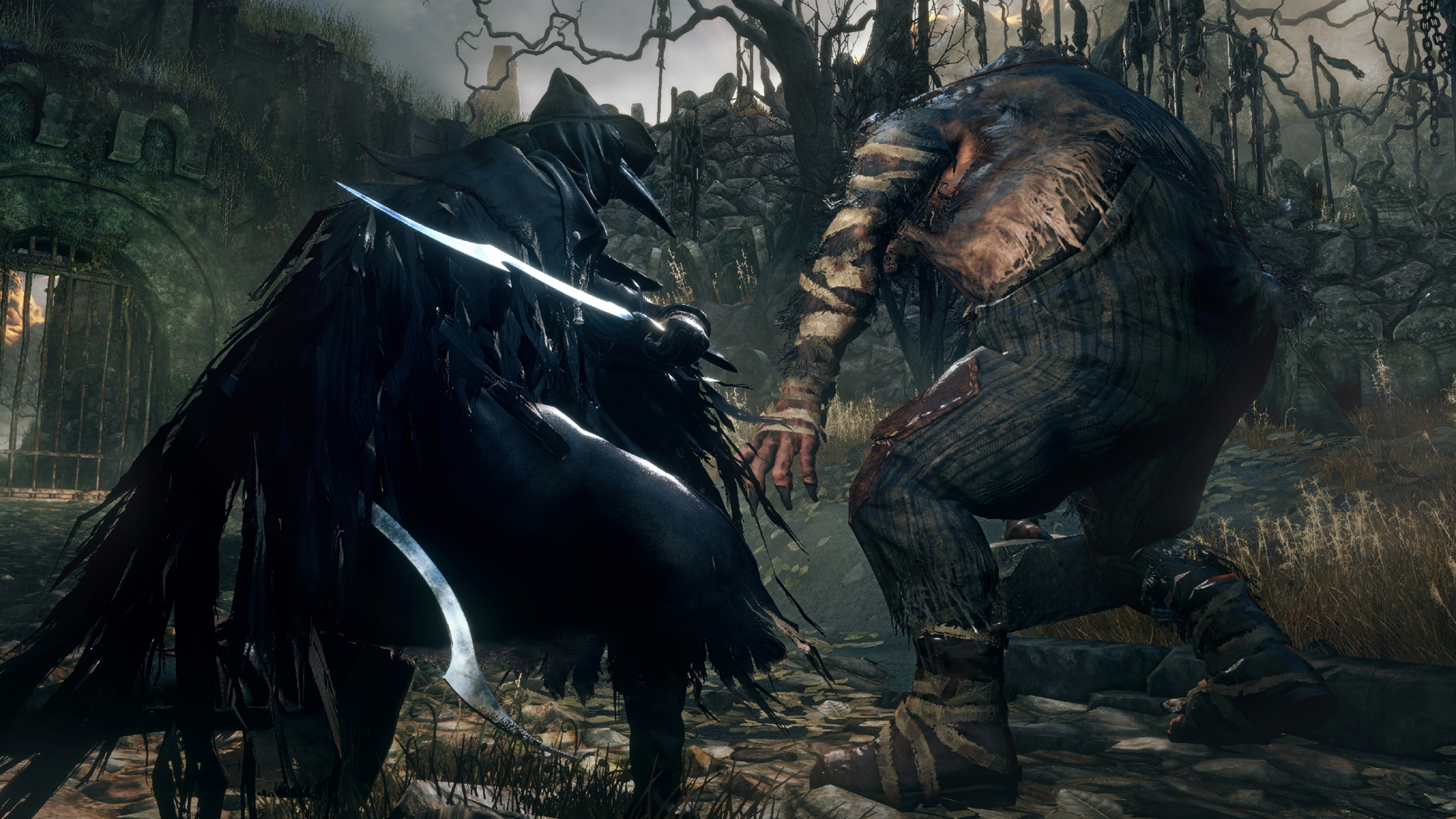 Creeping down a short flight of stairs I spy a group of four walking past, their backs towards me. Given the encounters so far taking on four was an untenable situation, so my character rummages around in his pockets for humanity’s first best friend: Fire. The Molotov soars in a beautiful arc before crashing into the nearest man, lighting up the street as I swoop in for the kill. Like any good game of this genre, I died anyway.

Bloodborne is every bit the game I imagined under the direction of Hidetaka Miyazaki. Like Demon’s Souls and Dark Souls before it, merciless difficulty and hauntingly beautiful atmospheres abound in this game. That said this isn’t a carbon copy and it’s immediately evident past the first loading screen.

Compared to the slow, measured clunking of its predecessors, the characters here move with greater agility. I initially chalked it up to using a hero specifically labelled as agile (in the vain hopes of dodging attacks) but this was the case for larger heroes too. With no shield whatsoever, the game encourages players to be more aggressive in combat, something I had great difficulty getting used to – one doesn’t simply forget what Dark Souls teaches you.

In keeping with the offensive theme we have a secondary weapon, made by combining our primary weapons into one. Depending on your class this can take on the form of a longer blade or a massive hammer, though they all trade attack speed for greater range and power. Unless your strike hits true the first time enemies will be more than happy to take advantage of your exposed state as you recover, so you really can’t just stick to one weapon type.

The guns, while initially a great interest, ended up being seldom used. At a tap you’ll fire a single shot to stun the enemy, letting you finish the job with blades. I can see players more familiar with the game implementing it for use in combos, though given my desire to see more content I wasn’t going to volunteer for more deaths and see how best to use it.

As before, dying comes in spades but they never feel overly frustrating. The wonderful thing about these games is how a careless mistake or mistimed attack clearly led to one’s demise, so learn from it and try again. It’s an addictive cycle bordering on the obsessive, forcing you to fully understand a game’s mechanics. Master it and you’ll feel like a king, at least until the next boss pops up. Fights are a duel, not about chipping away at a health bar.

What really caught my attention here was the visual style. Gone are the gloomy medieval fields and castles, replaced by a gloomy Victorian-era city. The shift to new hardware is easily noticed in the light reflecting off the wet streets and the character models. Garbed in flowing cloth and iconic accessories like a plague mask, it’s hard to differentiate who the killers here are.

Bloodborne emanates a grim vibe that promises misery, as if being in a dying city gripped by plague wasn’t miserable enough. It’ll be challenging and the rewards scarce, and I know there’s a contingent of gamers out there who just can’t wait to get it come February 2015. Count me in.

Ade thinks there's nothing quite like a good game and a snug headcrab. He grew up with HIDEO KOJIMA's Metal Gear Solid, lives for RPGs, and is waiting for light guns to make their comeback.
Previous post GameStart 2014: A Second Look at Evolve
Next post GameStart Asia 2014: Game On! Cosplay Competition