GameStart 2014: A Second Look at Evolve 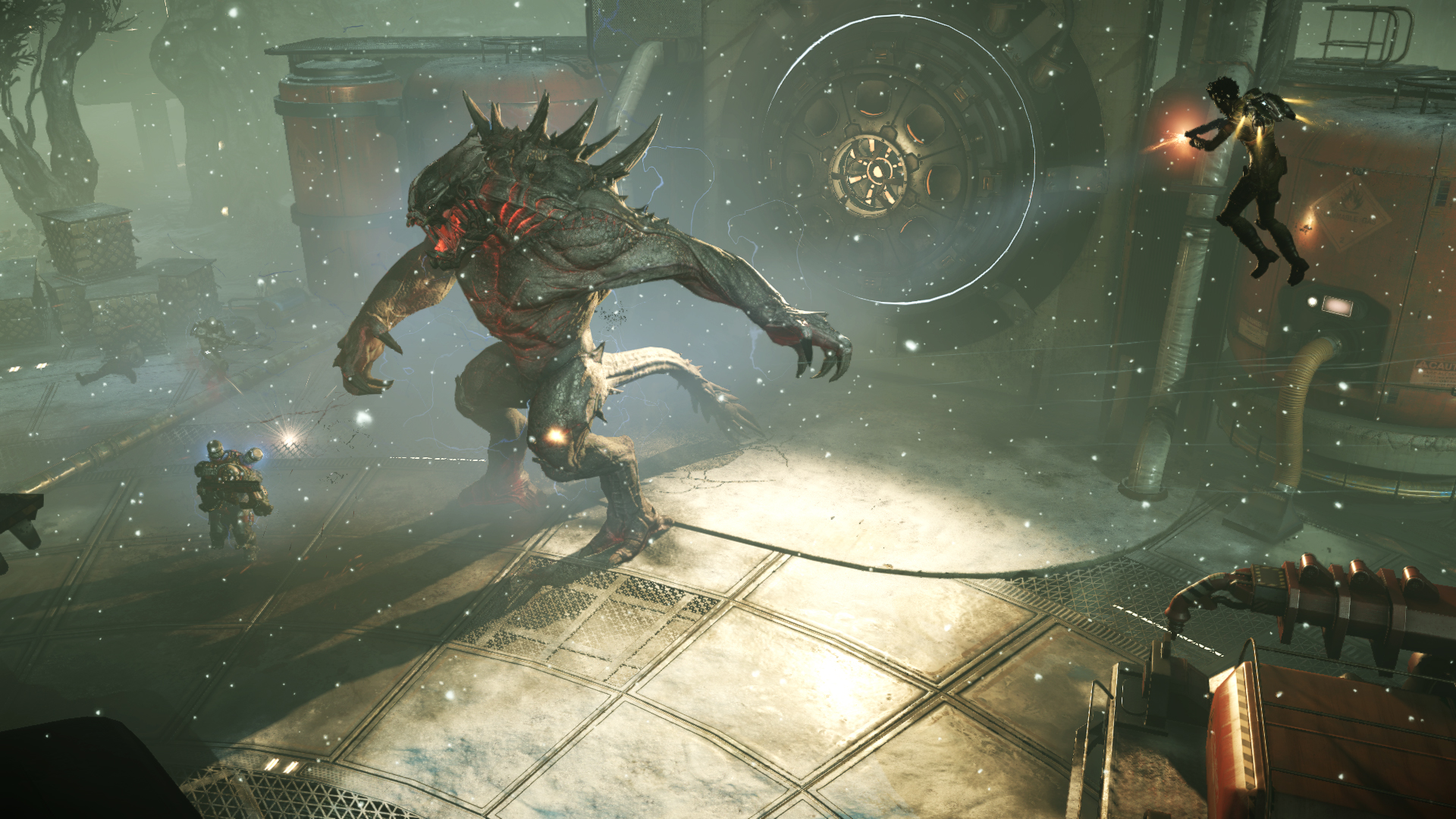 It wouldn’t be a stretch to call Evolve the star of GameStart 2014. To have attendees lining up for a brief session – after spending hours waiting to just get in the exhibition hall, no less – speaks volumes about expectations. After all we are talking about Turtle Rock Studios’ follow-up to the successful Left 4 Dead. The good news is previews continue to ring positive and their coming Big Alpha is getting all the attention it can get. It’s all well-deserved too because, frankly, Evolve is good roaring fun.

The months since our last hands-on with the game seem almost non-existent. Jumping back into Evolve feels like second-nature now: There’s no fretting over controls or doubt over each class’ role, the latter being one of the game’s strongest and most important points. My team of hunters was led by a 2K staff member, whose leadership quickly settled our two newcomers. On the opposing end the Goliath was in the hands of my editor.

What ensued was an intense hunt that barely let up, the built-up tension spilling into heart-pumping close combat. The Goliath is a melee character that wants to get all up in our faces, which is the last thing I wanted as the team’s medic. Boosters let us get off the ground and onto rocks but the monster’s leaps, swipes and fire-breathing antics scatters the team far and wide; more work for me but a huge plus to team survivability. Before long the containment dome collapses and the Goliath flees, with four bruised hunters hot on its tail. Medics alternate between keeping the team alive and tagging the monster, either for tracking or for establishing weak spots. In fact there’s seldom any downtime for each class and everyone plays an important role. This is Evolve’s best aspect as a cooperative game, where losing any one player results in a fairly severe penalty. Lose the trapper and you’ll be less efficient at finding the trail; lose the burly assault fellow and your damage output goes down significantly; lose the medic and, well, you’ll be courting death with an open door. This RPG-like mechanic rarely finds its way into shooters so we’re glad Turtle Rock took full advantage of it.

What’s equally magical is how each encounter always seems like a close call, that no matter how much of an upper-hand you may have you’re still fighting a hulking, powerful mass of muscle. There’s little room for complacency as the monster too, at least until you reach a fully evolved state.  Either way it’s rare for a fight to play out according to your own terms for long.

Of course, this isn’t necessarily the Evolve everyone experienced at the booth. By not fighting an AI bound by predictable behavior or scripted events we get a far more dynamic (and dangerous) opponent, though it also means their play-style affects how the game goes. I saw my fair share of aggressive and passive monsters up on the big screen, as well as teams that crumbled under a lack of direction. New to this build was the Kraken, which trades sheer physicality for a nimbler, tentacled grace. Wings grant the beast short bursts of flight, accompanying its range of lightning-centric abilities. While I didn’t get to try it, the random matches I observed suggest that the Kraken might be easier to wield than the Goliath thanks to its elevation and hard-hitting skills.

The Big Alpha will be telling of how the game performs on our machines and networks. Lots can change before the final version, especially under the hood, but it should provide a good estimate for both Turtle Rock and players. While a part of me is concerned about how Evolve will fare post-release once the mystery and fascination wears off, there’s another that feels confident about its future. After all, there’s nothing quite like it.

Evolve comes out for Windows PC, PlayStation 4 and Xbox One on 10 February 2015.

Ade thinks there's nothing quite like a good game and a snug headcrab. He grew up with HIDEO KOJIMA's Metal Gear Solid, lives for RPGs, and is waiting for light guns to make their comeback.
Previous post Weekend Wrap: Quantum Break, PS4 Share Play, Funko Pop! Vinyl
Next post GameStart 2014: Bloodborne, Herald of Suffering