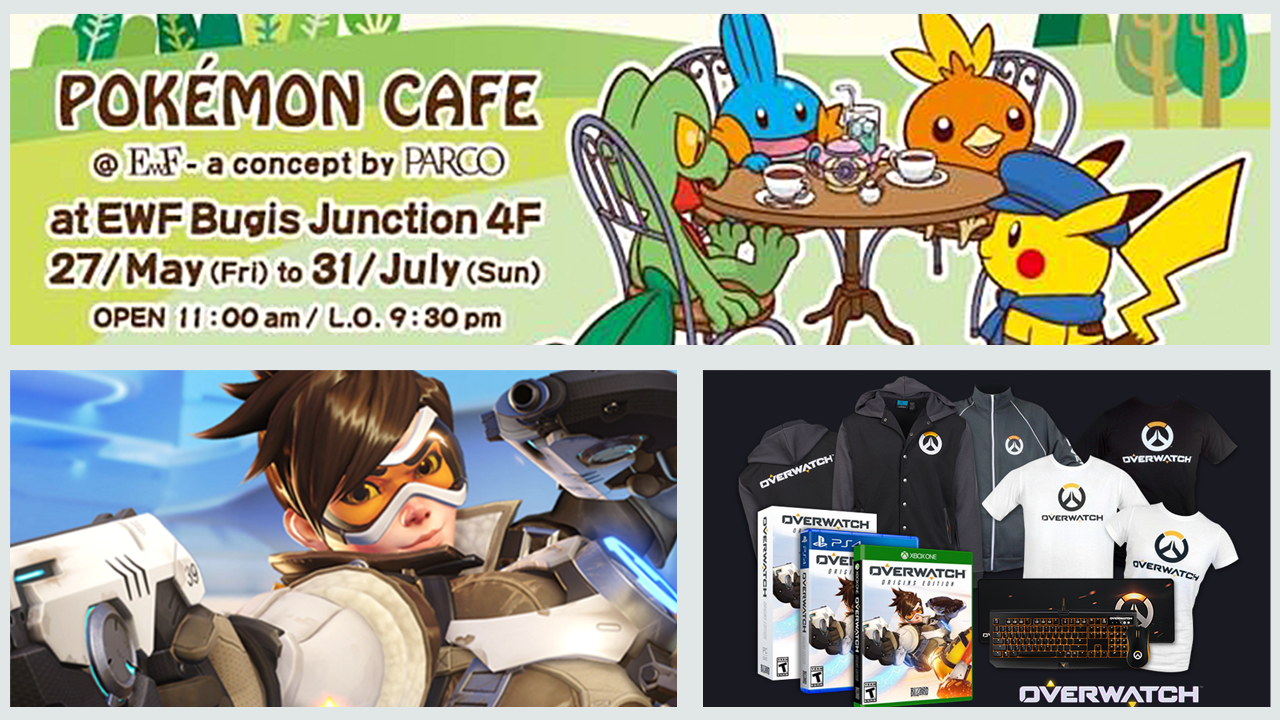 It’s the final stretch of May and that means two great events to pick from this weekend. Be sure to set aside plenty of time as we’re expecting fairly huge crowds at either event!

Japanese retailer PARCO will be running a pop-up Pokémon Café at Bugis from May 27 to July 31. An EwF (Everything with Fries) outlet at #04-05 will be transformed into a full-fledged official café, serving themed dishes and selling a wide variety of limited-edition merchandise.

Expect to see franchise mascot Pikachu show up for some photo opportunities too, as long as nobody attempts to catch it. Instead, an exclusive Pikachu code redeemable for Pokemon Omega Ruby or Alpha Sapphire will be given out in exchange for showing your receipt.

Diners will also be treated to freebies such as mugs, coasters, and placemats while stocks last. The amount received corresponds to the amount of food and drinks purchased too, so try to visit sooner rather than later.

This is the first official café in Southeast Asia and demand is expected to be overwhelming. As such, no reservations will be taken and queue times are expected to range between 30 minutes and a staggering 6 hours.

Both the menu and a list of official goods, accompanied by photos, can be viewed here. For updates and a handy FAQ, visit their Facebook event page.

Unfortunately, the café isn’t Halal-certified so not everyone is going to plunge their forks into poor Pikachu’s face. On the bright side, that means more cash to splurge on loot!

Blizzard Entertainment’s Overwatch is out today! It’s high noon; our world is worth fighting for; ryuu ga waga teki wo kurau; and all that.

That being said, Blizzard SEA is hoping to lure fans away from their PC and consoles this weekend, May 28 and 29, for a celebratory launch event at Capitol Theatre.

The two-day party will be home to plenty of activities, including the region’s first official show match between four eSports teams: No Use Talking, TitaNs, ManaSurge, and Exsequor. Who knows, we might get to see Play of the Games that aren’t dominated by Bastion for once.

Fans looking to buy merchandise can head over to a special pop-up store for both Overwatch and Blizzard gear, as well as bundle deals on the game itself, Razer Overwatch peripherals, and more. We have a breakdown of all those Razer hardware here.

Attendees can also take selfies at photo walls of in-game maps Hanamura, Dorado, and Numbani, alongside some of their favorite heroes. But why stop there? The game’s slogan has long been “join us”, so pick up a caricature of yourself as an Overwatch hero to make good on that induction.

What’s more, Blizzard is flying in a developer to answer your questions and sign your merchandise, elevating your exclusive loot game to a whole new level.

And if all that wasn’t motivation enough, then perhaps the promise of free goods might help. The first 100 visitors in the queue each day will receive a door gift, with lucky draws for items such as a custom-made Secretlab Omega chair.

Alternatively, those who already own the game can open up a “sure-win loot box” at the event. These aren’t in-game prizes but physical goods such as PlayStation 4 consoles, controllers, and Overwatch merchandise. As they’re limited in suppply, make it a point to vist this booth early.

For more details, head on over to both the official site and Facebook event page.

Overwatch is available now on PC, PlayStation 4, and Xbox One.

Ade thinks there's nothing quite like a good game and a snug headcrab. He grew up with HIDEO KOJIMA's Metal Gear Solid, lives for RPGs, and is waiting for light guns to make their comeback.
Previous post Catch Warcraft at Capitol Theatre for a free copy of WoW (Updated)
Next post Kritika SEA enters closed beta until May 30