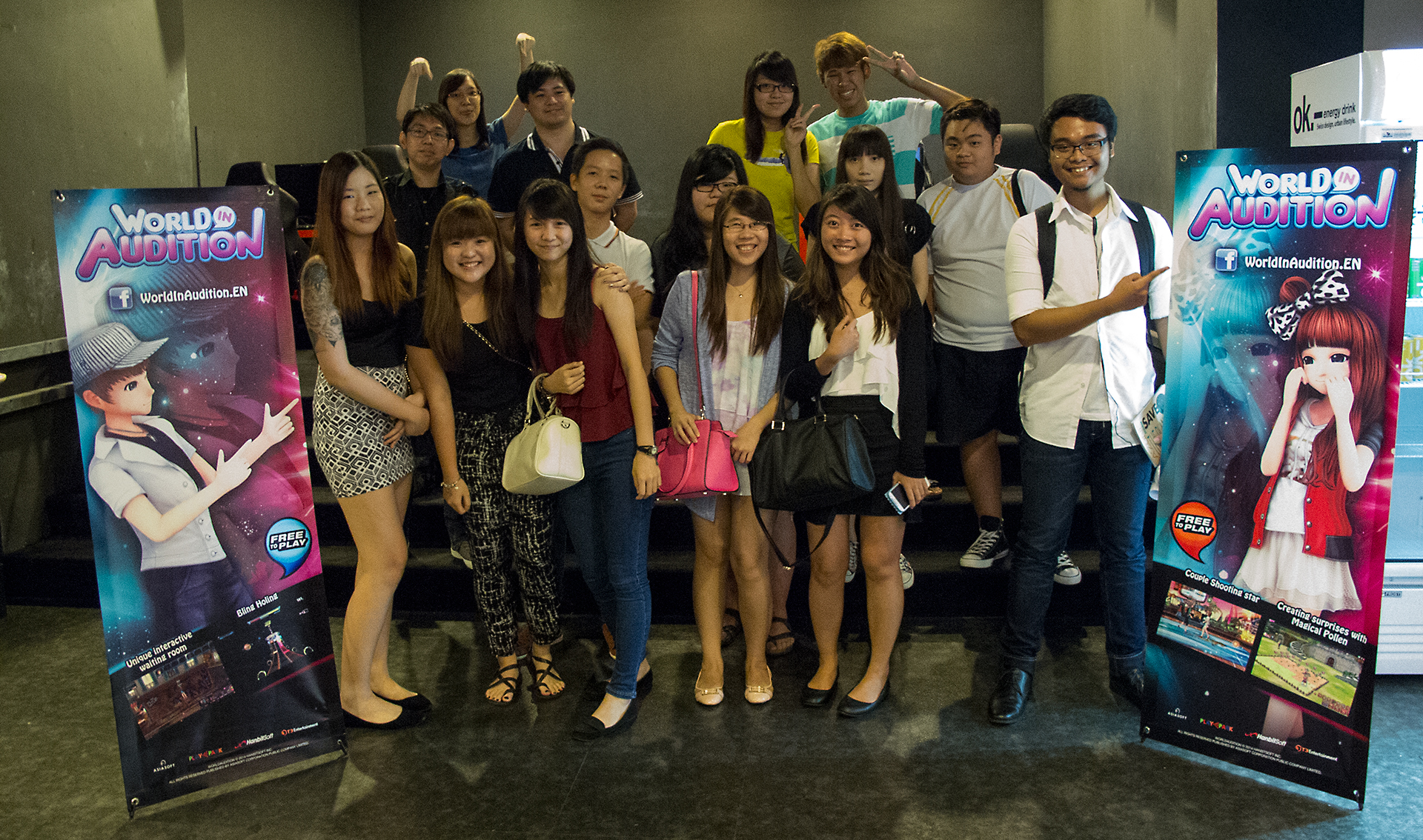 The time and date may not have been ideal but it wasn’t going to stop a group of dedicated AuditionSEA fans from turning up. Held at JCube Gaming Cybercafe, amidst the maze-like depths of Dhoby Ghaut Exhchange, these young adults were the first in Singapore to try out an alpha build of the dancing game’s sequel, World in Audition.

Technically the game looks polished with most of its features already included. Its most obvious additions are the two new game modes: Shooting Star and Bling Holing. On a simplified level they can be thought of as Project DIVA and a reverse DJ Max respectively, with difficulty levels reaching into the seemingly impossible. It’s an attempt at not only providing variety but also drawing audiences from other popular rhythm games.

On top of the plethora of K-pop songs, World in Audition is expanding its library to include soundtracks from dramas and anime too (hint: Sword Art Online). As usual the game is completely free-to-play, with future content updates being free as well. All in all Asiasoft is optimistic about attracting more players over time, and with no competition on the horizon we may just see Audition return to its peak popularity.

This doesn’t mean AuditionSEA is going anywhere just yet. Annual events such as “Clubber of the Year” will resume as normal, and while Asiasoft hopes that fans adopt the new game, the current plan is to maintain both if possible.

Highly-skilled players can look forward to more as well. World in Audition now supports ranking leaderboards within Southeast Asia, where a “Season” tab suggests a promising future for competition.

Unsurprisingly there’s way more when it comes to socialization and customization, the other selling point of Audition. Magical Pollen, for example, lets players tend to their own garden plot where friends can visit. You can also purchase property like a lavish mansion, hanging out by the poolside with interactive props placed wherever you fancy. These elements extend to the waiting rooms too, where everyone can sit on a tagada ride or participate in other activities.

We took the opportunity to speak to some of the fans there, people who had spent at least seven years with AuditionSEA. For 19-year-old polytechnic student Kevin “—Biscuitx3” Huang and 21-year-old university student Lavinia “Layna” Liu, World in Audition couldn’t come at a better time. The lack of new content lately meant they seldom touched the game now, and while their first impressions were fairly neutral – mostly due to unfamiliarity – they seemed interested in the new custom aspects.

17-year-old ITE student Justin Chen liked the new Shooting Star mode and was looking forward to the idea of eSports, though he wasn’t sure if he’d be playing more of it. The one critique he had was that the cash shop (for exclusive items) contained several repeats from AuditionSEA, something that ideally would not be the case at launch.

All three, however, shared one common misgiving: the lack of account transfers. After all the time and money invested in their avatars, having to start from scratch again doesn’t sound appealing. Lavinia says she won’t be spending as much now, after putting in nearly a thousand dollars over the years.

Asiasoft staff commented that there are no current plans on merging and that they are looking to find out the community’s thoughts throughout these testing periods. Here’s hoping that returning players get rewarded in some way for their loyalty.

There are no confirmed dates in World in Audition’s release schedule so far, though we were informed that Open Beta will be “coming soon”.

There’s still a chance for you to try the alpha build over the weekend so check our post to find out how. Otherwise, keep a lookout on their Facebook page for further news.

Ade thinks there's nothing quite like a good game and a snug headcrab. He grew up with HIDEO KOJIMA's Metal Gear Solid, lives for RPGs, and is waiting for light guns to make their comeback.
Previous post Singapore-Made One Upon Light Releases on 28 Oct for PS4
Next post Weekend Wrap 20/10/2014