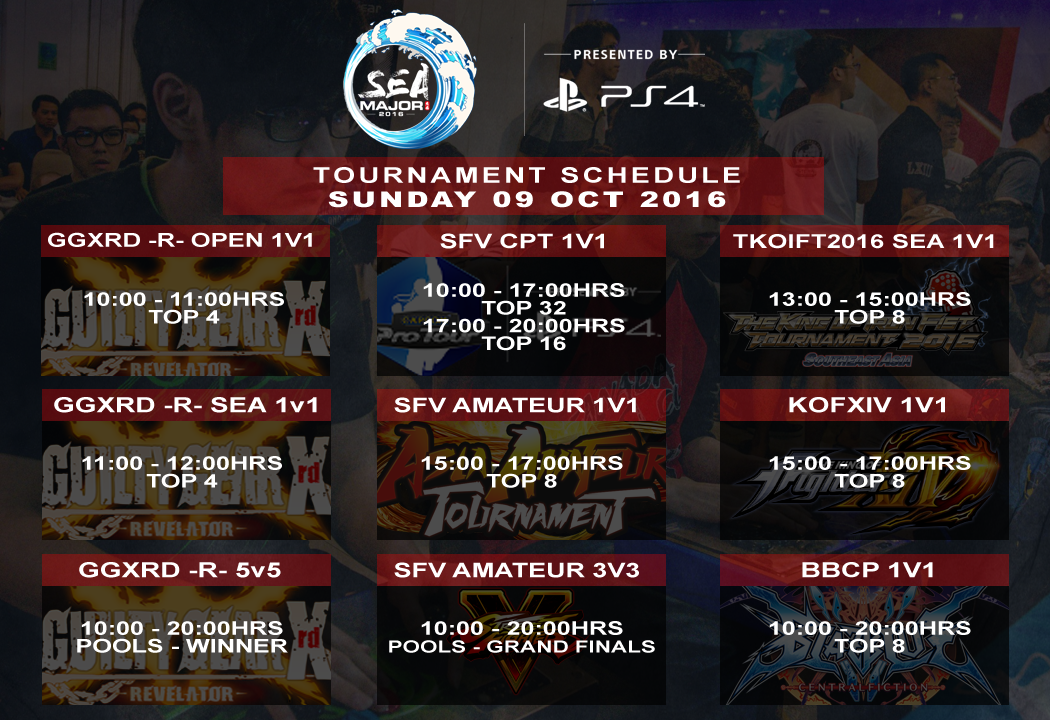 The fighting games community is in for a treat this October and we don’t mean Halloween.

GameStart 2016 will be hosting the PlayStation 4 Street Fighter V Asia Amateur Tournament, the Street Fighter V South East Asia Major, and the Tekken 7: King of the Iron Fist 2016 tournament, amongst many others, in just three action-packed days.

Attendees will get to witness fighting games at their best as top talents from SEA and beyond battle it out for prizes and regional representation. We’re looking at a total of seven titles across ten tournaments, all of which are detailed at BEast of the East – that’s the official page for registrations too.

Here’s a breakdown of our highlight tournaments; all times are in SGT (GMT+8).

Inaugural tournament with US$16,000 prize pool

SIES (Sony Interactive Hong Kong Limited Singapore Branch) has been slowly expanding its community outreach over the years but this tournament marks their first foray into eSports, in an effort to promote and support competitive gaming potential in the region.

Singapore, Korea, Hong Kong, Taiwan, and China will be represented by three players each, making for a total of 15 participants. The final wild card slot will be up for grabs during a qualifier at GameStart Asia itself.

The South East Asia Major returns to Singapore and remains one of the largest fighting game events in the region. Technically, all the other tournaments here fall under SEM 2016 but Street Fighter V is its main event, serving as one of the final chances for Asia-based players to get in the Capcom Cup Finals.

Expect to see stiff competition from Singapore, Thailand, Indonesia, Philippines and more – perhaps even some from outside Asia – with plenty more spectating online.

Whoever wins this qualifier may get a shot at representing SEA at the Arc Revolution Cup this year. The victor of this two-day trial will eventually face-off against Korea’s national representative, and only one of them gets to fly to Japan.

Guilty Gear continues to be dominated by the Japanese, with Kyohei “MarlinPie” Lehr and Yu “TopGaren” Gyungwoo the only foreigners to earn a spot in the finals for Toushinsai 2016 so far.

KOF XIV only released in August this year, making this one of the early batches of tournaments available for the fighting game. The winner of this qualifier heads to Japan for the championships, and the winner of that gets to go be in the running for the KOF XIV World Championships in 2017.

The King of Fighters XIV is the first in the long-running series to be rendered in 3D while keeping a play-style that’s somewhat similar to its predecessor.

If you thought KOF XIV was new then how about Tekken 7 – the game isn’t even out yet for PC or consoles, only in certain arcades. But that’s not going to stop participants from Singapore, Malaysia, and Indonesia from an opportunity to head for the King of the Iron Fist finals in Japan; for those wondering, Philippines and Thailand are getting their own qualifiers.

Tekken 7 released in Japanese arcades in 2015 but has since been updated to Tekken 7: Fated Retribution, which is the same version that will release on PC, PlayStation 4 and Xbox One in early 2017.

Being the immense event that this is, Mike Ross and Ryan “Gootecks” Gutierrez from Cross Counter TV will be flying in to host and commentate for the SEA Majors 2016. Keep an eye out for other notable FGC personalities!

GameStart 2016 will be at the Suntec Convention Centre Halls 405 & 406 from 7 to 9 October; tickets are now available for purchase. Cosplayers get in for free and the first 300 attendees each day score a random goodie bag.

It’s also worth noting there will be other tournaments for games such as Overwatch and FIFA 17 too.

[Image: BEast of the East]

Ade thinks there's nothing quite like a good game and a snug headcrab. He grew up with HIDEO KOJIMA's Metal Gear Solid, lives for RPGs, and is waiting for light guns to make their comeback.
Previous post World of Final Fantasy comes to the PS4 and Vita on 25 October
Next post GameStart 2016 is coming! Here’s what to expect