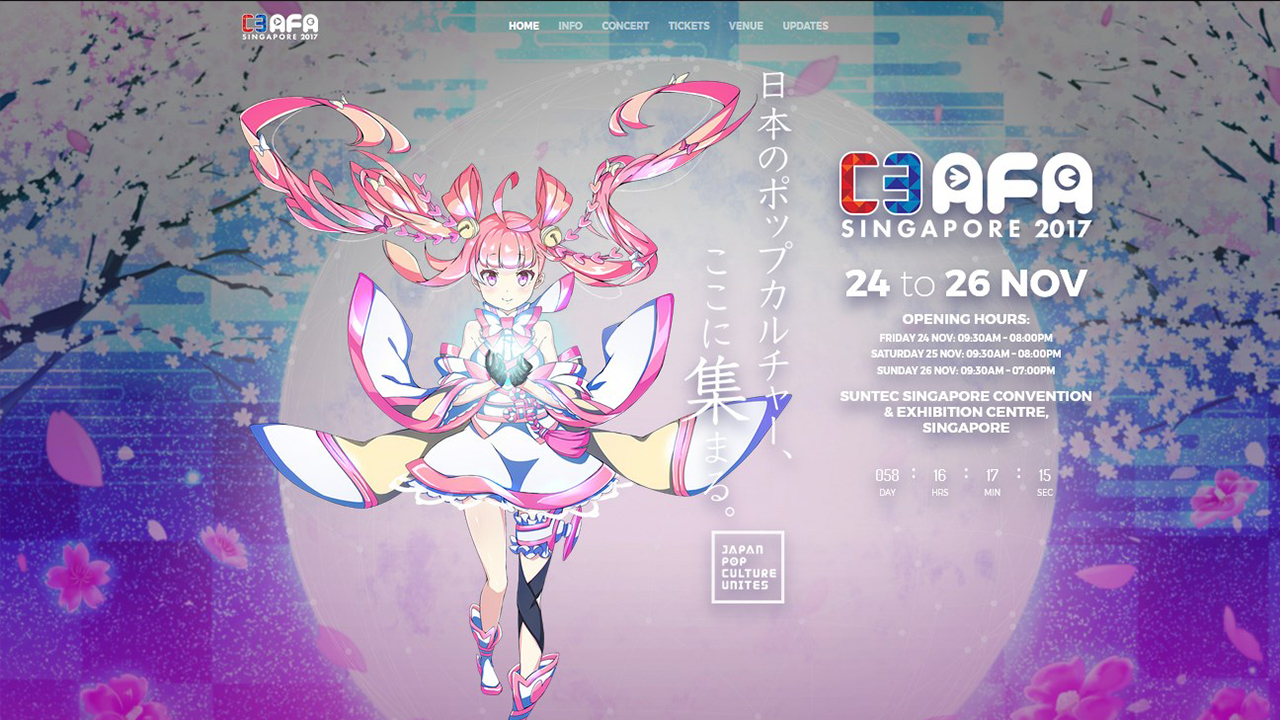 As gamers gear up for GameStart 2017, Japanese pop culture fans are busy saving for their annual pilgrimage to C3 Anime Festival Asia (C3 AFA). Renamed to mark a newly-inked collaboration, the 24—26 November festival sees the return of their landmark I Love Anisong (anime song) concerts alongside a show floor promising exclusive merchandise and star appearances.

The C3 prefix comes by way Japanese event organizer Sotsu, which AFA organizers SOZO partnered with in March 2017. For the companies it means expanding the festival beyond Southeast Asia; for fans, it means more and better content.

“With this being the 10th time we are holding the festival, this year’s C3 AFA Singapore 2017 marks a new milestone for the festival. C3 AFA is supported by key Japanese Entertainment & Contents Industry players, and promises direct commercial support from the industry in Japan,” said SOZO Managing Director Shawn Chin in a press release. “Just like previous years, we will continue to invite a wide selection of top quality guests and performers direct from Japan, pushing the envelope year on year.”

So far, they’ve already had two waves of announcements for I Love Anisong artistes, with more to be announced in the following weeks. It’s a mix of returning hits such as May’n and fripSide, accompanied by Singapore debuts ClariS, Moso Calibration, and more.

More will be announced closer to date.

Various ticket packages are now available for purchase online, with prices ranging between $88 to $428.

The other content tracks for this year’s C3 AFA are the Exhibition Hall and Main Day Stage, although details for the two are not currently available.

There have been some results of this newfound partnership, however. C3 AFA recently managed to secure NieR: Automata director Yoko Taro and Square Enix producer Yosuke Saito, although both are appearing at GameStart as part of a separate arrangement.

That’s not to say AFA has historically been devoid of gaming-related content. Bandai Namco Entertainment is a regular exhibitor with its many video game adaptations, while Wargaming.net turned up last year to show off their World of Tanks tie-in with Girls und Panzer – a show where tank warfare is, somehow, a legitimate high school club activity.

If we’re stretching, we can even point to idol group Luce Twinkle Wink☆ as they performed the ending theme for this anime season’s GAMERS!, a treasure trove of real-world gaming references.

We’ll have more information on C3 AFA as we edge closer to November.

Edit (27 Sep., 1439hrs): An earlier version of the article mistakenly named AFA’s organizer. The company is SOZO, not Dentsu.

Ade thinks there's nothing quite like a good game and a snug headcrab. He grew up with HIDEO KOJIMA's Metal Gear Solid, lives for RPGs, and is waiting for light guns to make their comeback.
Previous post Continue the Ninjago journey at Legoland Malaysia Resort
Next post TGS 2017: The exhaustive guide to TGS -Part II-