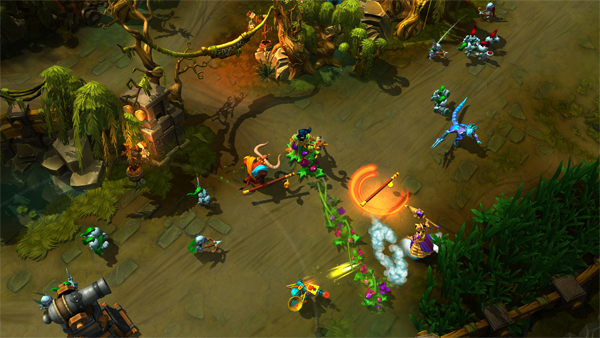 Asiasoft sure are on a roll. The company is now set to introduce yet another game into the Southeast Asian market, one that only made its public debut as recently as August during PAX Prime 2013. From the makers of Heroes of Newerth comes Strife, a “second-generation, free-to-play MOBA” that’s scheduled to enter beta pretty soon. As part of their SEA Road Tour, be the first outside of the US to try the demo at Campus Gamefest this weekend. Let’s find out why you should.

S2 Games are obviously no stranger to MOBAs, with their flagship Heroes of Newerth garnering positive reviews and a pretty strong following. What sets Strife apart from its churning sea of competitors is the idea of building a collective, contributing community. It’s a tall order for a genre that has a reputation for hostile players, but the developers believe they can change this via game design.

The primary difference is that Strife wants you to compete with enemies, not your teammates.  “Collaborative gameplay design eliminates battles over resources, designated roles, and player experience issues,” goes the press release. To do this they’ve streamlined player communication and will dole out rewards to those who collaborate, not chase leaderboard glory. They’ve also implemented a self-regulating community system in the form of Karma, which hopefully will deter those harbouring malevolent notions.

There’s a rich backstory for anybody who loves their lore too, involving a Dharkwave invasion that can only be countered by an army forged and proven in battle – here’s a comic preview. For those who rather fuss over gameplay instead, they’ll have the customisable progression system to explore. Roles have been given a makeover too, “with visual clarity in team fights and out of combat regeneration” designed to keep everyone active longer.

“S2 Games has developed Strife to be a highly accessible and collaborative multiplayer game without sacrificing the competitive aspect found in MOBA genre,” says Sherman Tan, Chairman of Asiasoft. “On behalf of Asiasoft, we are delighted to be S2 Games’ Operations Partner in Southeast Asian countries and we are looking forward to bring Strife to our audience.”

So yes, try your hand at Strife this weekend, 4–6 October at ITE Headquarters in Ang Mo Kio. The first 200 people to be at the booth (opens at 10 AM!) will receive an exclusive limited edition comic and a closed beta key. If you’re lucky, you just might catch the folks from S2 Games there as well. There’s also an official Facebook event page if that’s your thing, and an SEA page for updates and news.

Strife is a free-to-play MOBA set for a full release in early 2014. Don’t worry, all the characters will be available right from the start.

Ade thinks there's nothing quite like a good game and a snug headcrab. He grew up with HIDEO KOJIMA's Metal Gear Solid, lives for RPGs, and is waiting for light guns to make their comeback.
Previous post PlayStation Awards 2013 Voting Begins; Prizes Include Vita and PS4 Consoles
Next post Grand Theft Auto Online Goes Live