E3’s PC Gaming Show had some surprising and sad news for Terraria. The popular 2D sandbox adventure (in the same vein as Minecraft) is getting its final major update soon, capping 8 incredible years of free content since the it’s launch in 2011.

Aptly titled ‘The Journey’s End’, this also-free update freshens almost every aspect of the game.

There will be over 800 new items and it won’t just be for the end-game, either. They’re promising a radically different experience if you start a new character on a new world once The Journey’s End drops, though we don’t know what know what exactly these items are. Since it’s Terraria, we can definitely expect new weapons, equipment, blocks and ore.

There will also be new enemy types and at least one new boss — it could be the one we see in the trailer, during the Blood Moon segment. I would love to see new special events like the Pirate Invasion and Martian Madness; they’d be the perfect way to introduce new enemy types in a really exciting way, by making all of them come after the player at once. 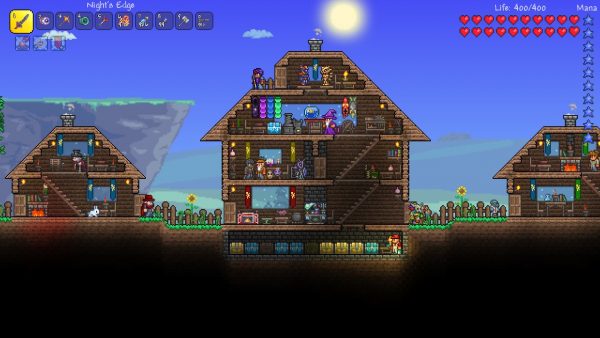 We also see a new in-game bestiary to keep track of all these enemies, and maybe even learn some lore about it. This is a much needed addition, considering the insane amount of enemies and unique loot that can drop in Terraria, and how most of what we know is actually documented outside the game in wikis and such.

New mini-biomes are coming too, meaning that every new world generated will see entirely new areas scattered about. They’ll probably bring new dungeon areas, loot and enemies. To boggle my mind even more, they’re adding the new Master Mode difficulty, when Terraria’s Expert Mode already seems impossible during boss fights. But hey, challenges add replayability, which is something the game is already chock full of.

The biggest addition revealed was, of course, golf. It’s the perfect addition to this game. What more is there to say?

Tim loves all sorts of things. Movies, TV shows, video games, comic books, cats and all that good stuff. What doesn't he love, you might ask? Minestrone soup. It is truly awful.
Previous post E3 2019: Ubisoft is launching Uplay+ subscription service in Sep
Next post E3 2019: Rage 2’s first expansion ‘Rise of the Ghosts’ is dropping later this year