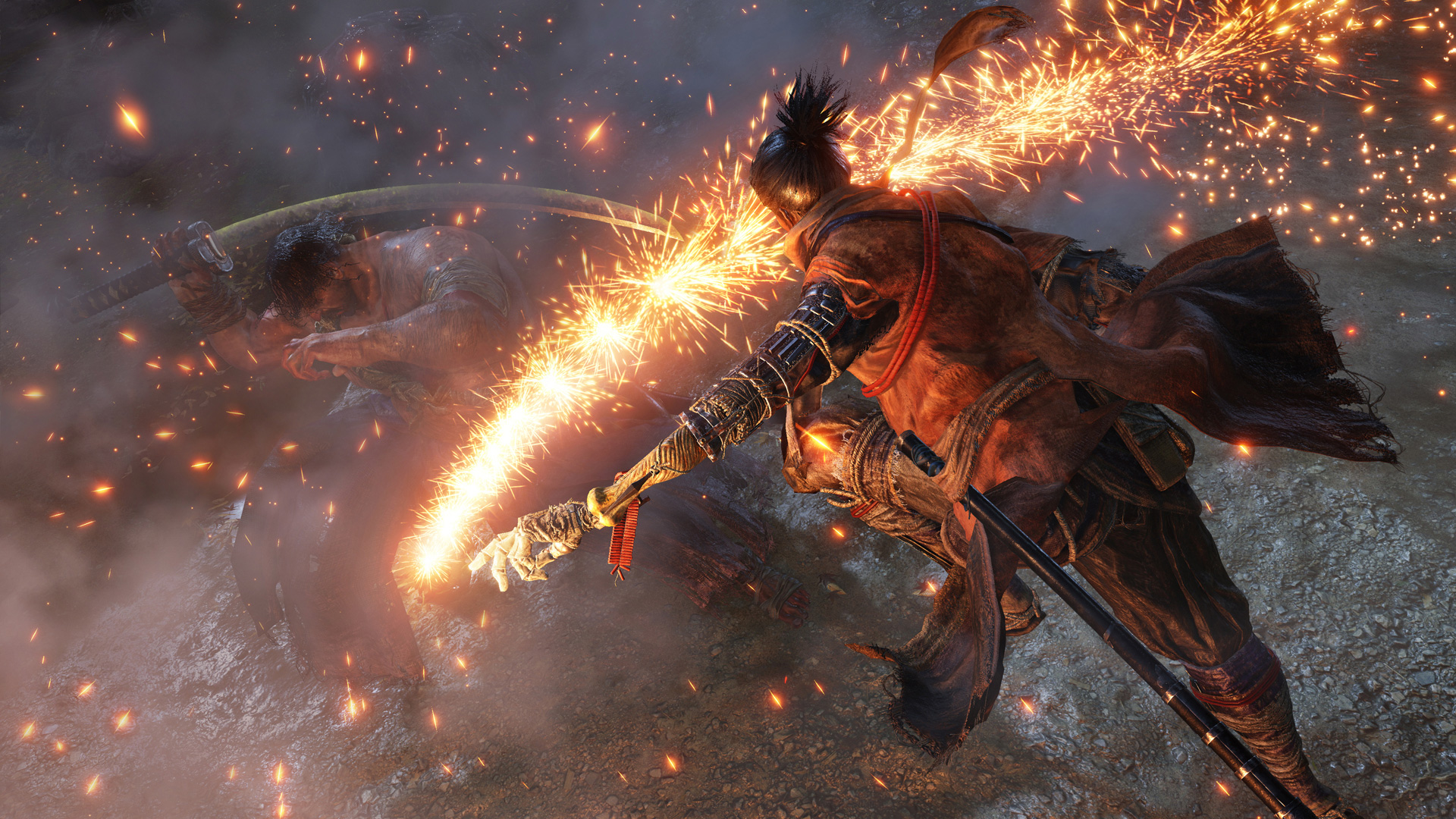 Japanese studio FromSoftware showed a new trailer for their next game, Sekiro: Shadows Die Twice, at Microsoft’s E3 2018 press conference. The creators of the Dark Souls franchise have moved on from Western settings to focus on the East, re-imagining the bloody Sengoku Period for a far more kinetic action game.

Not much had been known about the game since it’s initial announcement last year, though we can now piece together some clues about the story and gameplay. As if admiring Team Ninja’s Nioh, we see a white-haired samurai — “death is not your fate… just yet” — introducing the art of blade to human and supernatural foes alike. No word if the bonfire-style checkpoint system will make a return.

While we see traces of the Souls brand of weighty combat, parries, and oversized bosses, Sekiro: Shadows Die Twice takes things up a notch by giving our hero a “prosthetic” arm that doubles as a grappling hook and more. On top of the added verticality and nimbler movement are what appears to be refined stealth segments, where said samurai is creeping underneath houses or braced up against walls.

Here’s some added context from a press release:

Directed by Hidetaka Miyazaki, Sekiro: Shadows Die Twice is a third-person, action-adventure game with RPG elements. The single-player game puts players in the protagonist role of a hard-hearted warrior whose mission is to rescue his master, a young lord, and exact revenge on his arch nemesis. As “Sekiro,” or the “one-armed wolf,” players will discover the many ways to strategically approach combat and engage enemies.

Published by Activision, Sekiro: Shadows Die Twice is heading to PC (via Steam), PlayStation 4, and Xbox One in early 2019.

Fans shouldn’t be so quick to compare Sekiro to the Souls-borne franchise. In a closed-door E3 session, PC Gamer reports that the game will have no character stats, classes, armor, weapons, or multiplayer. In other words, this isn’t an action RPG with the theory-crafting or replay value that bewitched the gaming world, though it does mean FromSoftware has the added bandwidth to focus or experiment in other areas.

As seen in the trailer, combat and level design are some areas to be excited for. Our titular ninja-samurai displays a greater level of athleticism with his jumping and grappling, though that doesn’t necessarily translate into a hit-and-run fighting style. PC Gamer confirmed that Sekiro’s prosthetic can be equipped with an axe-shattering shield, and from the video we can also see a retractable shield and fireworks. Character art from the official website also shows an underslung cannon, so at this point we can surmise that the Berserk inspirations continue.

Complementing these tools and weapons is a combat system that incentivizes aggression. In place of a conservative stamina system is ‘posture,’ a mechanic that has been described to Critical Hit as such:

“The goal for combat is to run your opponent out of posture and then land what we’re calling a Shinobi Death Blow which is a huge amount of damage all at once. Both sides actually have posture, and posture is lost whenever you take damage, and also when you don’t block with the correct timing.

So you saw a lot of blocking going back and forth. If you just hold the button, it makes a dull sound and you lose posture every time you make that block, but if you press the button right as the weapon is about to hit you, you get a bunch of sparks and the enemy flies right back. You don’t lose posture, your opponent does instead.”
It sounds like a new take on the parry skill that action fans have honed over the decades, rewarding the player with what is presumably an instant kill – something that’s not always guaranteed in action RPGs. PC Gamer also learns that different Kanji appears during combat, with ‘danger’ being commonly used. That’s the one we can see in the trailer, during a duel with an ogre-like enemy and again in the fight against a mounted samurai. The latter is particular noteworthy, as Sekiro jumps to avoid getting impaled. FromSoftware states that some of these telegraphed special attacks cannot be blocked, so you’ll have to rely on the dedicated jump button to get to safety.
Stealth is the other field that received quite a bit of attention. The PC Gamer hands-on mentions slitting an NPC’s throat to prevent detection, with Variety reporting that Acquire’s beloved ninja franchise, Tenchu, served as a source of inspiration. A translated Famitsu interview shared by Redditor DrowningOtsdarva further confirms this, saying that ‘ninja’ was key to the game’s design.

Ade thinks there's nothing quite like a good game and a snug headcrab. He grew up with HIDEO KOJIMA's Metal Gear Solid, lives for RPGs, and is waiting for light guns to make their comeback.
Previous post E3 2018: Choice and consequence comes to Dying Light 2, co-written by Chris Avellone
Next post E3 2018: Rage 2’s post-apocalyptic mayhem arrives in spring 2019