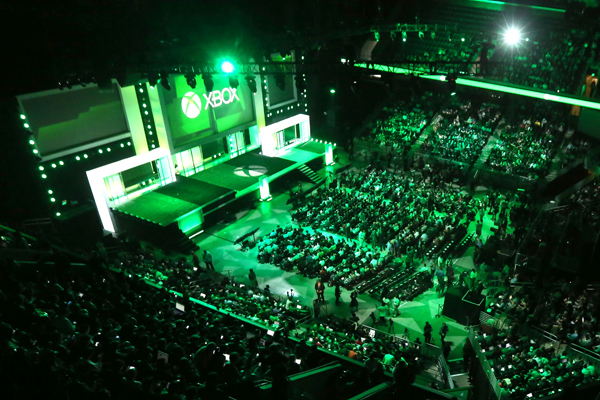 True to their word, Microsoft’s focus was all games at E3 , stuffing their media briefing full of brand new trailers and announcements. Let’s break down all that excitement into something a little more cohesive.

No, there isn’t a price cut. You can, however, get a new Xbox 360 that features the same two-tone design of the Xbox One, presumably making them look great together under your TV.

Rather, the real highlight here is the two free games monthly for Xbox Live Gold members, a “thank you gesture” that’ll run until November. This reaffirms Microsoft’s earlier statements that the Xbox One isn’t out to replace the 360, with “hundreds of new games” on the way. These include World of Tanks: Xbox 360 Edition, Max: The Curse of Brotherhood and Dark Souls II.

The Xbox One Exclusives

Time for what you’ve been really waiting for!

The non-exclusives featured were just as exciting. In fact, the very first thing we saw when the show started was a lengthy trailer from Kojima Productions! That’s right, Metal Gear Solid V: The Phantom Pain opened for Microsoft’s E3 press conference, which leaves the obvious question of what Sony plans to show later on. We got to see a good chunk of gameplay footage and characters named, with director Hideo Kojima closing the presentation on stage.

The Witcher 3: Wild Hunt also made an appearance, protagonist Geralt of Rivia on a journey to save his loved ones. There’s never-before-seen in-game footage which looks deliciously enticing, from panoramic open-world environments to teases of challenging combat. As for Battlefield 4? They’ve got single- and multi-player content out, so you might want to look through them all.

Ending it all with a bang was our very first look at Titanfall, Respawn Entertainment’s debut game. A quick refresher: Respawn is the new studio of Jason West and Vince Zampella, former co-founders of Infinity Ward. You’ll notice some Call of Duty similarities with the UI and player perspective, but everything changed when the Titans fell from the sky. This is definitely a system seller considering the Xbox’s large shooter demographic. (Don’t worry PC gamers, you get Titanfall too.)

Xbox One, Available This Holiday

Priced at US$499, this is the most expensive Xbox to date, putting it near Sony’s PS3 launch prices. It’s an expected price point really, considering the new hardware involved and the fact that it comes bundled with the new Kinect. Consoles are notorious for selling at a loss so Microsoft is eager for gamers to purchase the Day One editions. Unfortunately, we hear that Singapore isn’t in the first batch of countries so there’ll be some delay on our end.

They didn’t announce any changes to Xbox Live membership rates, so that’s something potential owners will have to keep in mind as well. What they did announce is that Microsoft Points will (finally) be replaced with real money denominations and that Xbox Live Gold sharing will be introduced.

We’ll share more information once they’re released, but for now it looks like Microsoft has managed to convince more than a couple of people to pick up the console thanks to its games lineup. Just don’t forget that the Xbox One has its quirks too.

Ade thinks there's nothing quite like a good game and a snug headcrab. He grew up with HIDEO KOJIMA's Metal Gear Solid, lives for RPGs, and is waiting for light guns to make their comeback.
Previous post E3 2013: World of Tanks Rumbles Over To The Xbox 360
Next post New Mac Pros And A Redesigned iOS 7 Coming From Apple