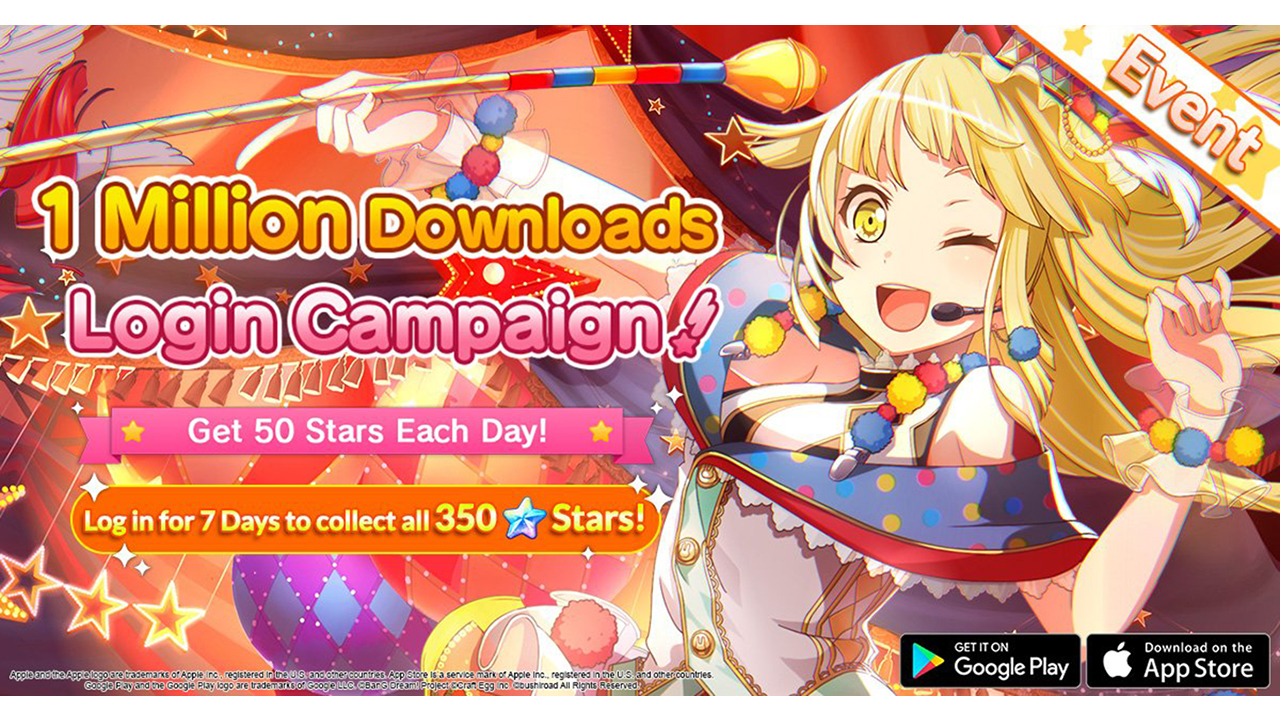 Bushiroad have hit the one million downloads milestone for mobile rhythm game BanG Dream! Girls Band Party! As tradition dictates, players can celebrate the occasion with some in-game goodies.

Beginning today, players stand to benefit from a seven-day long login campaign. It’s 50 free stars per day, which works out to 350 stars in total – enough for a single, though inefficient, gacha pull. Unfortunately, that’s all in the way of freebies lined up.

The other two event notes are a four-star guaranteed gacha and a one-time special purchase on stars. The first is a 2,500 Paid Star gacha featuring a guaranteed 4-star drop.

Girls Band Party! is co-developed by Craft Egg and Bushiroad, with one its main draws being the high amount of cover songs and voiced lines. The Android and iOS rhythm game is part of mixed media franchise for BanG Dream!, which revolves around five girl bands each with their own musical styles (their male counterpart begins soon). The game’s worldwide version released in April and has, so far, consistently released new events and content with little downtime in-between. While there is an energy system, it’s only used as bonus modifiers for items, experience, and event points – a player is free to play or practice for as long as they wish.

We briefly spoke to one of the voice actresses, Rimi Nishimoto, who was in town to promote a BanG Dream! concert at Japan Park Singapore later this August.

Ade thinks there's nothing quite like a good game and a snug headcrab. He grew up with HIDEO KOJIMA's Metal Gear Solid, lives for RPGs, and is waiting for light guns to make their comeback.
Previous post E3 2018: Dead or Alive 6 gets a new look, coming early 2019
Next post Cyberpunk 2077’s E3 demo was running on an i7-8700K and GTX 1080Ti