The ASUS ROG Swift PG27VQ is one high-tech gaming monitor 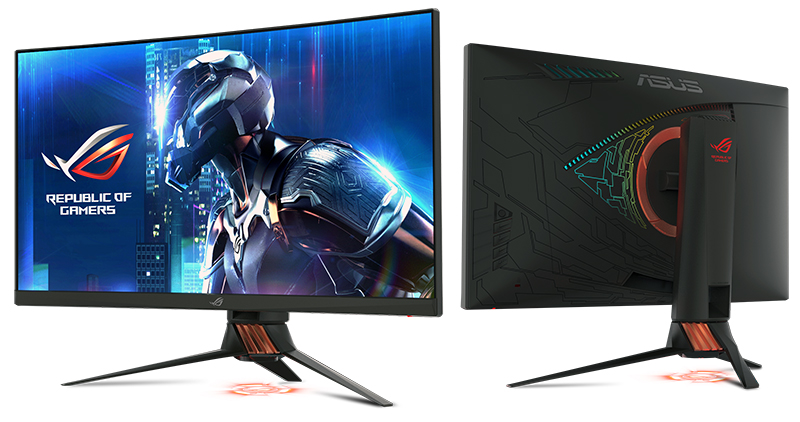 ASUS has announced the ROG Swift PG27VQ gaming monitor at its Outshine the Competition event in Berlin, adding to its already formidable arsenal of high-end displays.

The ROG Swift PG27VQ is one of the most feature-rich monitors around – if there’s a specific something you want in a monitor, there’s a high chance the PG27VQ has it. For starters, this 27-inch curved gaming monitor boasts a 2,560 x 1,440-pixel resolution and NVIDIA G-Sync technology, so you should get crisp pictures and a butter-smooth gaming experience.

This is also the latest gaming monitor to feature quantum dot technology, which offers better color reproduction and a wider color gamut.

It has a 165Hz refresh rate that will allow you to make the most of the powerful GPUs on the market. Even if you wish to disable G-Sync for the lowest possible input lag, things should appear relatively smooth and fluid.

In addition, this is the first gaming monitor to come with ASUS Aura Sync RGB illumination. The lighting is projected from the rear of the display, and you’ll be able to synchronize the effects with in-game action and other Aura Sync hardware and peripherals.

ASUS also showed off the 27-inch ROG Strix XG27VQ at its Berlin event, a slightly more modest offering with a 1,920 x 1,080-pixel resolution. Still, it is curved display and boasts a 144Hz refresh rate for more fluid movement and support for VESA’s Adaptive-Sync technology, which means it should support AMD FreeSync.

The company touched on the ROG Swift PG27UQ display as well, a 3,840 x 2,160-pixel HDR screen with 384 dynamically-controlled lighting zones for improved contrast. Like the ROG Swift PG27VQ, it uses quantum dot technology as well and supports the cinema-standard DCI-P3 color space.

Both the ROG Strix XG 27VQ and ROG Swift PG27UQ were announced at CES 2017. Unfortunately, there’s still no news yet on price and availability.

Squee delights in trash talking on Overwatch and sleeping till 5pm on weekends. Few other things matter, except perhaps the next episode of Game of Thrones.
Previous post Spend a day with Nier: Automata’s Director
Next post Project Scorpio will bring performance boosts to older Xbox One titles