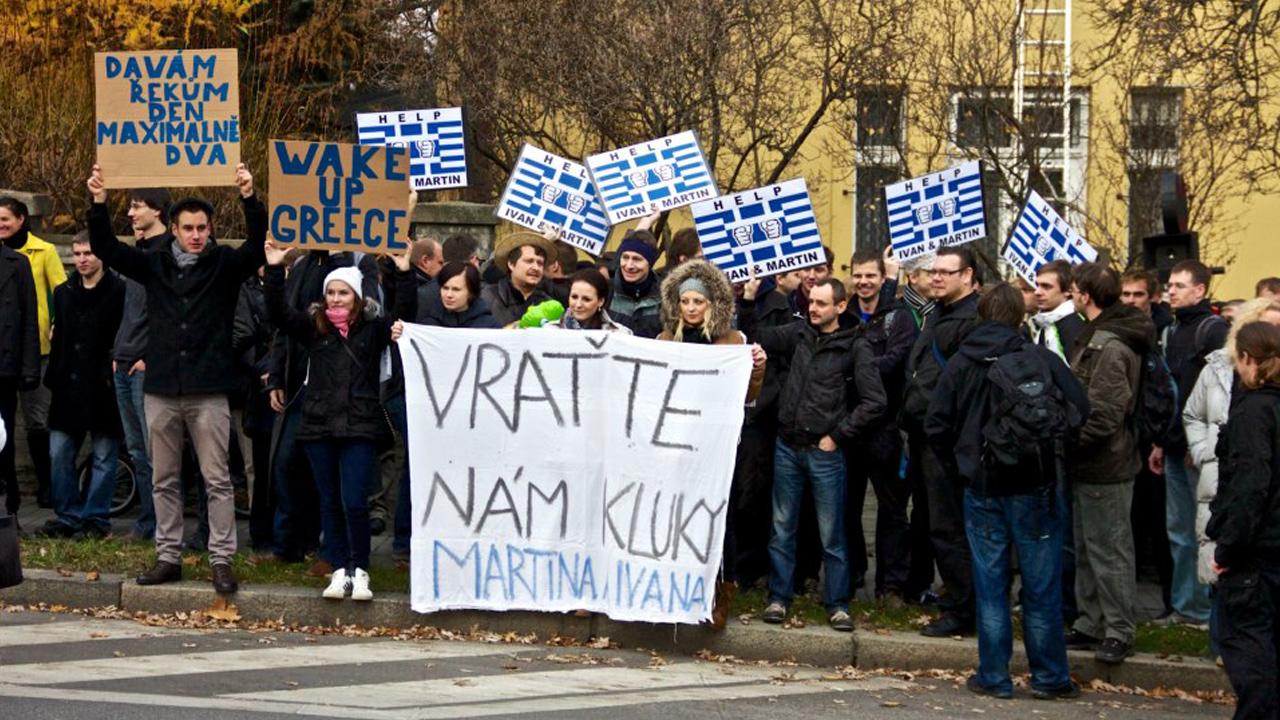 Since their 9 September arrest on grounds of espionage, Bohemia Interactive developers Martin Pezlar and Ivan Buchta have yet to see any improvements to their predicament, prompting them to release a letter thanking their supporters.

We would like to thank you for the ongoing support of our case. After two tiring months, it is important for us to hear (well, read) words of encouragement and to learn that we are not forgotten. We are treated well, but we feel we should rather be with our families than here.

Your effort makes it easier to handle: We enjoy the postcards, community news, pictures and puzzles which are being regularly sent by this website’s magnificent staff.

It seems that it will take some time before we could return home and there is certainly much to overcome.”

The website in question refers to HelpIvanMartin.org, a community-run page endeavouring to publish all the facts and latest updates regarding the case, as well as offering supporters worldwide an avenue to support the two Czech developers.

Ivan and Martin are accused of taking photographs of military bases on Limnos, Greece’s eighth largest island, known for being a quiet destination with beaches and archaeological sites. And for anyone who’s ever been there, its military airport. For spying, Greek law says they could be detained in jail for up to 18 months and, if convicted, jailed up to 20 years. Their lawyer, Panayiotis Eleftheriou, states:

“The ‘incriminating’ piece of evidence is 14 stills, taken from a video clip recorded with a handheld camera. Amongst these images [is] a depiction of the Limnos airport which is also used by the military. But it’s clear that the cameraman stops the recording once he noticed the signs informing that photography is prohibited.”

There has been precedent for Greece’s sensitivity over military air bases: In 2001 a group of plane-spotters taking photographs and notes at an air show were later charged for espionage. They were acquitted only a year later.

The major difference between the two incidents is the existence of YouTube and social media sharing. Today, videos of Limnos airport are publicly available; one such example shot within the cockpit of a Cessna aircraft shows an aerial view of the airport, as well as ground footage of military installations. A parked fighter jet is even seen in plain view.

If Eleftheriou’s statement is accurate, then Ivan and Martin are being held for a video that any tourist could have taken, intentional or otherwise.

More than meets the eye

Bohemia Interactive’s Arma series is well-known among military simulation enthusiasts. Arma 3, scheduled for a 2013 release, depicts a fictional future where the island of Limnos is contested between invading Iranian forces and a Greek resistance movement. The premise has been met with outcry in Limnos, officials deeming the game a threat to national security.

In an AFP report, the head of the island’s municipal council has said that, “There are national reasons to keep certain areas on the island secure but [in the game] they are shown in high-definition.”

Another official has said that because Limnos is near the Turkish mainland, there are national security considerations at stake.

Greece and Turkey have shared a tense relationship for decades, staging mock dog fights in disputed air space. 2006 saw a mid-air collision between two fighter jets, although both sides tackled the accident amicably. Of notable interest is the claim that during the 2001 plane-spotters case, Turkey was urged to reveal any links it may have had with the group.

Is Ivan and Martin’s detention due to an underlying agenda or are they simply victims of a dire misunderstanding?

A natural assumption one may have is that the developers were on Limnos to gather references for improving Arma 3. Bohemia Interactive has denied this, saying that the pair visited the island as tourists.

“Their holiday was a product of their interest in the island, triggered by their work on Arma 3 over the past two years of development. They took photographs and videos in public areas, as countless tourists arriving to enjoy the beauty and hospitality of Greece may well do. These included a short video as they drove through the main road passing around the international airport, where in one short part of the video off in the distance some hangars and other buildings of the complex can be seen.”

They also clarify that Arma 3’s Limnos, now nearly completed, has been heavily modified and rescaled to suit their narrative, with no intents of displaying actual military installations.

A wave of support

DayZ creator Dean “Rocket” Hall has dedicated his first (and only) Tumblr post to the developers. Hall has spent years in the military — his inspiration for DayZ came while attached to the SAF in the jungles of Brunei — and says that the “charges are nothing short of absurd.” He also shares his personal experiences with his two friends and later lists four things people can do to help.

The affair has attracted the attention of Czech President Václav Klaus as well. In a formal letter to Greek president Karolos Papoulias, translated by Eurogamer, Klaus wrote:

“I want to ask you, Mr. President, to follow this unfortunate affair with special attention considering the excellent relations between our nations so this does not throw unnecessary shade onto our relationship.”

In a separate event, Greek Prime Minister Antonis Samaras agreed to “pay attention to the matter.” This is according to his Czech counterpart, Petr Nečas, who approached Samaras at the European Summit in Brussels.

Despite this, the case has still not seen any progress. Czech supporters took it upon themselves to act, and on 26 November around 150 people did, holding a protest in Prague. Led by Daniel Vavra, Creative Director of Warhorse Studios, they demonstrated peacefully outside the Greek embassy before proceeding to the Ministry of Foreign Affairs.

The latest news comes by way of MEPs (Member of European Parliament) Jan Březina and Niki Tzavela contacting five Greek politicians – three Ministers, a Governor and a Vice-Governor — who have the power to intervene.

The letter informs the representatives that the conditions Ivan and Martin are held in “are considered in the Czech Republic as unacceptable.” They point out the long delays in the investigation and court case itself, delays which are causing the two men to be detained longer than is necessary. A request was then made to ensure that they be treated accordingly to international human rights treaties.

“We have also requested them to monitor the case in the full extent necessary and to ensure swiftness in either dropping or filling charges without bureaucratic delays,” summed up Březina.

As of writing the online petition has garnered 18,466 signatures. You can also design and send postcards, some of which will be selected and delivered directly to Ivan and Martin on a weekly basis (mine’s already sent so it’s up to you now).

Today marks the 87th day they are in prison.

Ade thinks there's nothing quite like a good game and a snug headcrab. He grew up with HIDEO KOJIMA's Metal Gear Solid, lives for RPGs, and is waiting for light guns to make their comeback.
Previous post Playing AikaSEA Can Get You a Galaxy Note II
Next post Review: AFTERSHOCK X15