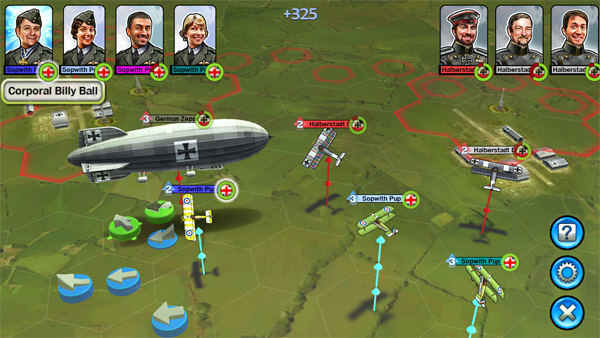 Those of us without an iOS device can finally take to the turn-based skies of Sid Meier’s Ace Patrol thanks to a Steam release today. Sounds like the perfect time to fulfil those zeppelin dreams (and hopefully keep them from turning into flaming balloons).

Firaxis’ game has received lots of praise since its mobile release, mostly due to a level of game design not usually found among its peers. Not too surprising considering how it’s made by the same mind behind Civilization, but one shouldn’t ignore the other production values behind it either. The art is simple yet gorgeously detailed, and if the trailer’s anything to go by, it sounds pretty impressive too.

Ace Patrol tasks players with missions that range from bomber escorts to all-out air attacks, all packed into different campaigns. Each nation comes with its own set of perks and, more excitingly, planes. You’ll get to pick a squadron leader too, an ace pilot who’ll come ready with a set of fancy manoeuvres . It’s not all about fast planes and derring-dos, of course; Ace Patrol is a tactics game after all, so better positioning and planning wins the day. Those looking for a greater challenge can turn to multiplayer for their competitive fix, complete with Steam’s leaderboards for bragging rights.

You can grab Sid Meier’s Ace Patrol for US$9.99 (SGD$13) on Steam for Windows PCs. If you’re quick about it, buying before 5 September will get you a 10% discount too. Now to figure out a greater mystery: why the pilots seem so cheerful.

Ade thinks there's nothing quite like a good game and a snug headcrab. He grew up with HIDEO KOJIMA's Metal Gear Solid, lives for RPGs, and is waiting for light guns to make their comeback.
Previous post The Last of Us Gets an Interrogation Mode
Next post PlayStation Home Content To End For Japan And Asia