STGCC 2012: Interview with The Beast Brothers 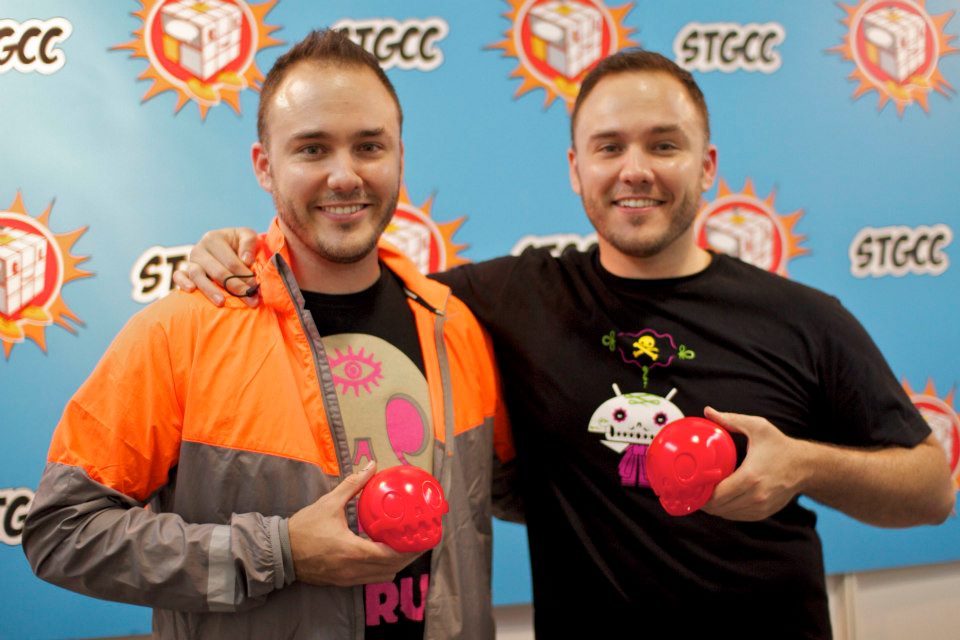 We had the chance to sit down with toy designers The Beast Brothers during the Singapore Toy, Games, and Comic Convention last weekend. The identical twin designers hail from Mexico, and have designed for Nike, Kidrobot, Reebok, Coachella, Bacardi, and Vans.

While saying hello, they told us that they were big fans of video games when they were younger, and that proved to be the perfect opening for our interview:

BB: We don’t have time, but the last game we played was Portal 2. Portal 1, Portal 2, Borderlands…

BB: I love it. I used to go crazy, I used to stay up really really late, really late, like up to six in the morning playing, and just go around, gathering money and… it gets really addictive! Lately we haven’t had time to play any video games, but there’s really cool stuff coming out. I wish they’d make another Portal, Portal 3.

RGB: Are there any video games that have struck you as iconic or that you consider your favourites?

BB: Super Mario World, Super Mario Bros 3, like all the classics. When we were little the NES just came out, so we got really really cool games, like Back to the Future, Ghostbusters. We never finished it but it was really fun.

(Legend of) Zelda too, and all the new Zeldas, I think there’s a new one that came out. (Skyward Sword) looks amazing and it’s so cool. I love Zelda but our favourite one is definitely Super Mario World.

RGB: So would you guys ever consider designing a game?

RGB: What sort of game do you think you’d like to do?

BB: Like an adventure game. We used to play those point and click games from LucasArts, like The Secret of Monkey Island, Sam & Max… We played a lot of those games; those are like our favourite games, ever. They’ve got the ‘pick up’, ‘look at’ ones and the complicated ones. It would be fun to make those, but I don’t think kids nowadays are really into these games. They don’t have enough patience.

BB: Yeah, they just like shooting and going bup-bup-bup with the guns. There are some really cool puzzle games like Portal and all that stuff, but they’re more interactive. You aren’t going to spend so much time like we used to on the computer. But yeah, we would still love to make a game.

BB: Oh, a lot. We base our work in very specific, traditional Mexican stuff, like the Aztecs, the luchadores, the sugar skulls, Day of the Dead. We try to grab the traditional stuff but make it a little bit more updated, a little bit more modern. For Lucha Libre (their upcoming art show) – we used to watch it every Sunday. Every Sunday, they’d play it in the morning. We used to just watch it and go crazy, scream at the TV, and break things.

RGB: Well, if you guys were to go into the ring as luchadores, what sort of personas would you take on?

RGB: How would you dress?

BB: Skull heads, and capes, like really big capes. And black and neon colours, like pink, and red.

RGB: Do you think sticking to your cultural inspirations is going to pigeonhole you as a Mexican artist?

BB: I don’t think so because first of all, to be a successful artist, you have to find your audience. If your audience is way too big, you cannot concentrate. So if you find that niche audience, it’s easier for you to grow.

Instead of trying to get everybody, you get that little base and you start growing from there. We love doing Mexican stuff because it’s something that’s really different from everything else. And everybody kind of knows about the wrestlers, about the Aztecs, and the Mayans, and all that stuff.

In a sense, people would be like ‘oh, these guys just do Mexican stuff’, but on the other hand, there are a lot of people who like this kind of art. So I think it wouldn’t pigeonhole us. I mean, we do all kinds of stuff, but we  have more successes when we do more Mexican style stuff.

RGB: Apart from Mexican culture, are there any other areas that you draw your inspiration from?

RGB: What about Stephen King?

BB: Everything! When we work, we listen to Stephen King. We put audio books in the back, and we listen to him and we do our projects. It’s awesome. It’s really cool and inspiring. It’s different – it’s not related to what we do, but it’s really enjoyable. We like horror-themed stuff.

Video games are an inspiration too. It’s really cool to look at video games: the art, especially. With video game art, you don’t copy what the other artists do, but you see what they’re doing and you’re like, oh, maybe I should try something like those colours they’ve used.

When we come to these conventions, it’s really cool, because you see so much new stuff and it inspires you.

RGB: What are some of your favourite toys you’ve created?

BB: The calaverita is one of our favourites. It means little skull, and is inspired by the sugar skulls from Day of the Dead. They’re not patterned because the idea is for you to paint on them. Because you make the design, they’re all going to be the same. Sugar skulls are hand made – there aren’t any that are the same. So it’s the same concept here, we want to make sure every single one is different.

You can just get it like that because it’s pretty, but we can also paint it and put your name, or whatever you want on it.

RGB: Do you have any other collections or collaborations coming up that you’re really excited for?

BB: Since we have to prepare for the Lucha Libre show in October, we haven’t had time to do anything. We have a couple of painted releases, but collaborations… maybe next year we’ll have something cool coming up. But nothing planned yet.

The thing is, we were talking to a couple of artists here, and we say, we should do something together, and that’s cool because we don’t have anything yet, but after this convention, we’ll have a bunch of new stuff. We can talk with them and follow up, and we’ll have stuff for next year. We also hope to come back to the convention next year. That’d be really cool.