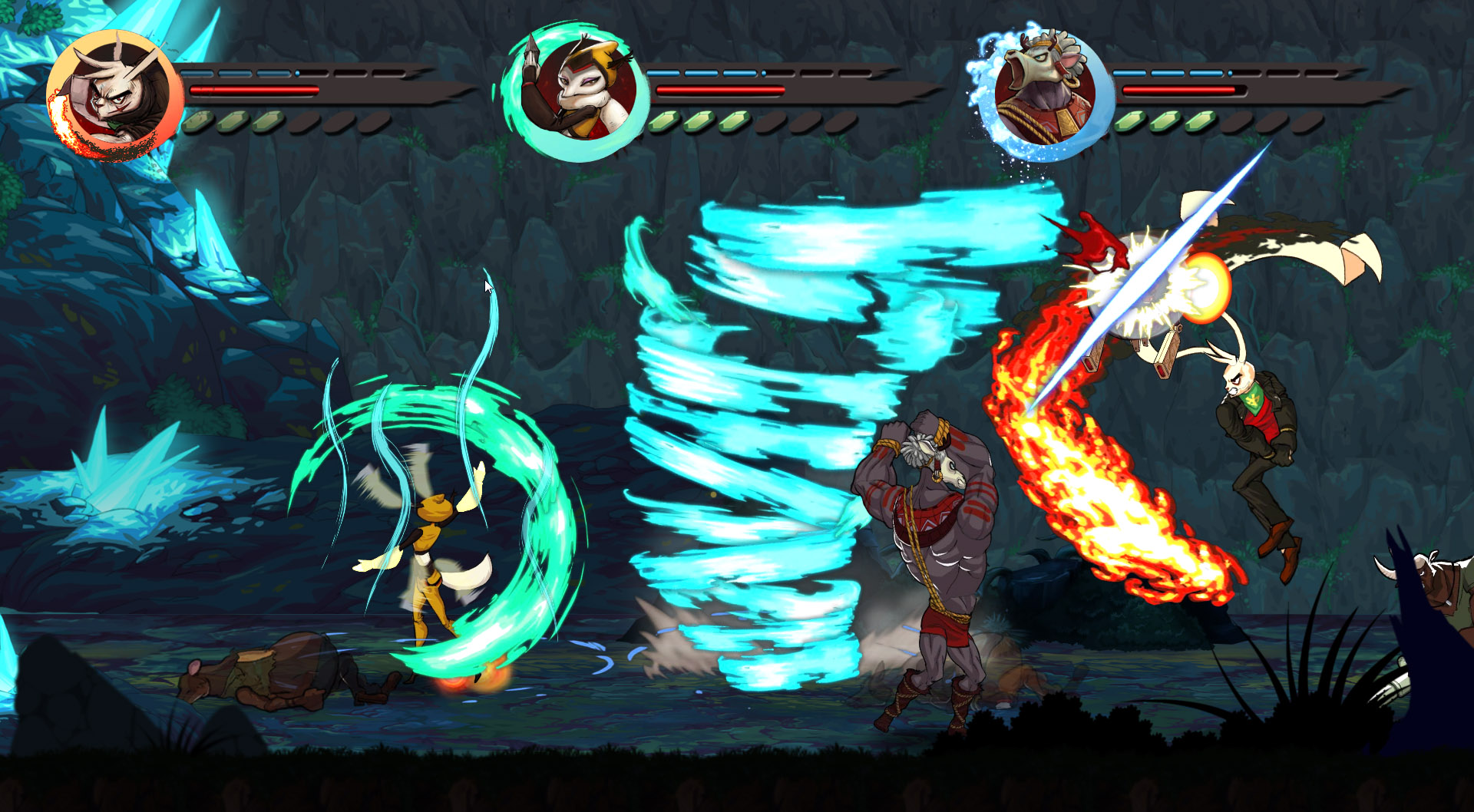 It’s been a year since local developers PD Design Studio made their indie debut with Dusty Revenge, a 2D action platformer featuring Old Western themes and an in-depth combat system. This time round they’re back with a prequel, taking in all the feedback they’ve received to forge Dusty Raging Fist into an even wilder adventure.

Our anthropomorphic protagonist, Dusty, is now a young vigilante journeying to distant lands. A pair of dark moons has risen, a portent from ages past, and Dusty must now search for the source of evil with the aid of friends and Mythical Guardians.

Raging Fist incorporates three-player online co-op, elemental powers, and the aforementioned Mythical Guardians as a devastating summon, just like in Final Fantasy. All that’s an addition to the things already at the table: stunning artwork, unique use of support characters, and a combat system that has more in common with brawlers.

However, PD Design Studio is seeking the community’s help. They’re staying afloat with client work but need to raise AU$60,000 (approximately SG$60.7K) through Kickstarter to commit to the project and turn Dusty Raging Fist into an uncompromised reality.

We reached out to the studio for some extra information and KJ, the lead game designer, has provided us with his response.

For our first game the title is a lot more straightforward, Dusty Revenge, because it’s a revenge story. Silly as it may sound, one of the things we wanted is for the game to start with the letter ‘R’, just like Revenge. We came up with a few to vote within the company and Dusty Raging Fist was the most popular. I can’t quite remember but I think Retribution is one, Reloaded is another. We had to do away with Reloaded for a very obvious reason: there’s a piracy group that posts new torrents and suffixes them with Reloaded.

Reviews for the first game pointed out it had long loading times and generally needed more polish. How is the studio tackling these issues?

Dusty Revenge, sadly, uses an “ancient” game engine, Torque 2D. It wasn’t able to do some things and didn’t do other things so well. We chose it at that point in time partly due to lack of options. But the game development scene is very different today; you have fantastic game engines that are practically free, such as Unity3D, Unreal 4, etc. We moved away from Torque and completely rebuilt the whole game in Unity3D. Previous issues such as long loading times isn’t a problem now. I think performance wise it’s much better.

We are actually sharing one of our in-house “core technology” between Dusty Revenge and Dusty Raging Fist. Many improvements have been made, and whenever we optimize it we would try to apply it for Dusty Revenge. Sadly, it doesn’t respond well due to the game engine. Having said that we have not given up hope, and we’ll still try to solve some of the issues Revenge is facing whenever we have breakthroughs.

Conversely, the game received high praise for its artwork and combat mechanics. What are some things you can’t wait to show off?

I think we upped the ante for the graphics this time round. The environments are all painstakingly hand drawn. The combat mechanics were improved upon gamers’ feedback. Overall, the controls are tighter and more responsive. I am unable to pick any one component to show off, but if it has to be one then I would say the elemental powers.

Players will be able to equip themselves on the fly with elemental powers. The Ice Elemental will freeze enemies, Wind will hit enemies upwards, Lightning will electrocute enemies, and so on. Players will even be able to collect XP and upgrade these powers. For instance, the Darkness Elemental can be upgraded to suck enemies into a black hole.

Can we combine elements for some cool, secret attacks such as flaming hurricanes or dark lightning?

Initially, we had it, but it turned out to restrict other gameplay elements. We took it out in the end but have replaced them with the Summons. Players can summon Mythical Guardians – some of them are for destructive purposes, some for healing, and there are even some that are a mix of both.

What prompted the increase in co-op players to three?

We like the asymmetry of three players. In two-player games, when player one get thrashed by the enemies, player two goes and help. But in a three-player game, you have to make a decision on who to help. I think it’s going to create interesting dynamics between the players.

Online co-op is a first for the series. Could you share some thoughts about it and how you intend to playtest it?

Online co-op is a much requested feature after we released Dusty Revenge. Technically, it’s much more complicated to work on, even when it comes to design – we need to think things through. We already have the framework done, and tested internally, but we know that there are still tons of things to test for.

This is where backers who opted for the beta access can come in and help. When the beta copies go out we’ll have a more realistic environment to test things. Of course, beta testers aren’t just helping to test for bugs; ideally, they can help to refine the game with their suggestions and feedback.

Internally, we’ll being working with some friends and fellow developers to help us test out the online function.

It’s an uncomfortable thought but an important one: What’s Plan B if Kickstarter fails?

It will mean development will slow down since we need to juggle between contract jobs and our own game project. It’s really disruptive actually, to be switching in between projects. And to be very honest, if we have to, we will take away some of the least important or most time-consuming features.

In a single sentence, convince someone new to give Raging Fist a chance.

Imagine all the goodness of old school beat’em ups, just that it’s been modernized and improved to become one awesome, 2D action-packed experience.

I’m a purist and old-fashioned – I always root for the hero – so to me, it’s going to be Dusty. Can’t speak for my team though.

I hope everyone will click on this link and if they like it, back the project, or at least help spread the word. (smile)

Thanks for your time!

A DRM-free copy of the game, inclusive of a Steam key if Greenlit, can be secured at the $15 tier. Adding an extra $5 bundles in a PDF copy of the 40-page art book, whereas bumping the pledge up to $30 gets beta access. There are a couple of neat physical rewards too, so be sure to check out the Kickstarter page for all available options.

Dusty Raging Fist is being developed for Windows and Mac.

Ade thinks there's nothing quite like a good game and a snug headcrab. He grew up with HIDEO KOJIMA's Metal Gear Solid, lives for RPGs, and is waiting for light guns to make their comeback.
Previous post Review: Halo 5: Guardians (Xbox One)
Next post Sony Updates from Paris Games Week