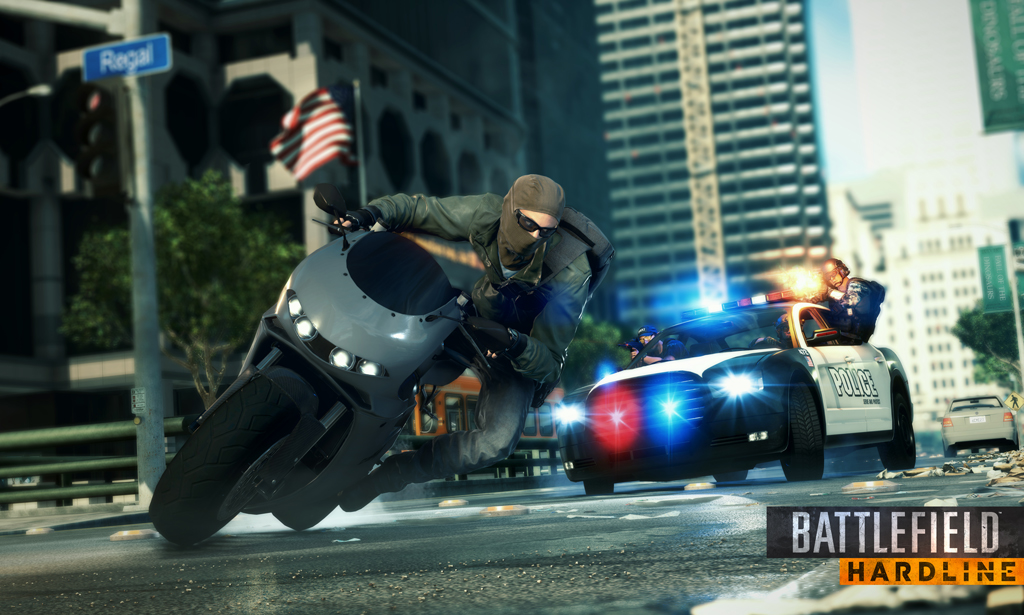 We recently had the chance to catch up with Visceral Games’ Ian Milham, Creative Director of Battlefield Hardline, to dig into his thoughts of the franchise and the legacy baggage it comes with. If Visceral Games sounded familiar to you, it should. These guys brought us the horrifying (in the good way) Dead Space franchise, after all.

GaX: How does Hardline differ from the main Battlefield series?

Ian: We knew that if you’re going to put a Battlefield label on the box, it needed to have certain things. We didn’t want people to think that we just wanted to sell more copies and simply put the Battlefield brand on it. So it needs to have variety and the scale from small maps to giant ones. It needs vehicles, team play, destructions, and all those things. All those things are in Hardline, as much as we can put them in.

What we really wanted to do with Hardline was bring it to a whole new world and tone so it felt fresh and then add on a bunch of features that felt like they really paid off as a Battlefield game.

GaX: There was a bit of a displacement in consumer trust during the launch of Battlefield 4. What were some of the key points learned from that?

Ian: It seems silly to even say it, but when you ship a game it should work and that’s a reasonable expectation. So I think we’ve got a tradition where we take very seriously in shipping polished games. The good news is we’ve been working with DICE a year and a half before Battlefield 4 shipped and we helped contribute some of the work that’s been done in terms of stability and features. And all these synergies have definitely helped in ensuring the success of Hardline.

We’ve had a very successful Beta in June. We will also have another Beta on every platform before we ship. Anything this big and complicated, of course there are potentials for hiccups. But the game’s been running great and stable and we’re anticipating a successful launch.

GaX: How’s it like for a team who has worked on a tight claustrophobic horror game franchise in Dead Space, and then move to another franchise that’s exactly the opposite?

Ian: It’s a nice break. We worked on Dead Space for seven years and that’s a long time. We’d love to make more, but this is a nice change of pace. Maybe we’d make more of these (action shooters) for a while *laughs*. The future is wide open for us at Visceral Games. But naturally some of the things we learned whilst making Dead Space, such as the need to have a great story, atmosphere and polished gameplay…that all still applies with Hardline.

GaX: Doesn’t it seem a little out of place to put the player as a cop or a criminal in a franchise that has always been about open-scale military warfare?

Ian: We still have all that Battlefield is known for – we will have plenty of explosive weapons in Hardline. They are deployed and found differently to make them a bigger deal. We have giant explosions and things falling down. We have all the same vehicle roles and planes that you would have come to expect from a Battlefield game.

GaX: Do you feel that is there is a sense of unfair pressure that comes with this ‘Battlefield’ franchise legacy?

Ian: Is there unfair pressure? No. I don’t think so. Battlefield is a hugely popular and long-standing franchise and it’s been excellent for so long that people have high expectations for what it is. That is earned and deserved so it’s not unfair at all.

Whether it’s Battlefield of any other game at all, the work done by people is amazing. People have the right to expect amazing work. So I don’t think it’s unfair at all.

GaX: What was that eureka moment that struck the team when Visceral Games decided to put cops and criminals in the game and not, say, space marines?

What really struck us doing cops and robbers was that it was a theme that everyone could relate to. It was very accessible but also almost all the features suggested themselves.

The things we wanted to do and see, we knew where they should be. What should the game modes be? Let’s see…you could rob banks, take part in epic car chases…the moments were there and then it was just a matter of delivering and seeing if we could get to those things. It felt so rich with potential that we didn’t have to think too much about it.

GaX: So tell us more about the just announced Hotwire Mode in multiplayer.

Ian: What we’re particularly excited about here at TGS is our Hotwire Mode. I spoke about how we knew we wanted to do great car chases. Battlefield had good vehicle technology and we wanted something faster. We wanted everybody piling into the same car and stealing it. We worked on it for two years and made various iterations. I think we finally got it to a place where it might be popular as a new mode.

Battlefield is known for all of its depth and different toolsets, creating those organic unpredictable moments. This game mode is a factory for those moments. That’s one I’m really excited about. It doesn’t feel like any other game mode.

Ian: It’s hard to say. We’ve been talking to Battlefield fans and new people from all over the place and brought them into the studio and showed them the game and let them play with it. They really care about different things, even if they’re talking about one game.

There are some people who are into the realism of the gun clip. They want to know about the bullet drop, the sway, and the scope. Others are just as hardcore Battlefield fans, but they like completely different things, such as taking a C4 explosives to a motorcycle and playing with the game physics sandbox. They want it like that, and both of those people are equally passionate, just in different ways.

Ultimately, we are trying to deliver greatness for all those different types of fans.

GaX: What would be your best Three shooters of all time over the past two decades?

Ian: *laughs* oh man! Games that I can remember that were influential to me…well, the original demo for Battlefield 1942 is one. Back in August 2002, I played it for a month and even though the demo was just one map, I played it over and over again. Call of Duty 4: Modern Warfare had an amazing campaign and was so influential going forward. I really liked Far Cry 3 last year, I thought they really did a great job providing freedom and uniting everything. Those are my choices.

Ian: See, as soon as you say it, of course. Medal of Honor: Allied Assault, that first time that really felt like such a whole other level of realism and craziness. Of course, you start to bring in Bioshock and what it was doing, I can probably keep going on and on.

GaX: Is there anything else you’d like to share with our readers? Any parting words for them?

Ian: I really appreciate everybody’s patience with the delay and I think they’ll find it’ll be worth it. We used the time to listen to feedback from the Beta in June. We’re taking the extra time to make this great and I hope to see you online next year.

Aaron Yip is an industry veteran with more than 15 years of experience. When not spending time on his gaming PC and consoles, he can be found in Hyrule solving ungodly puzzles and collecting gems.
Previous post This Week on PSN Asia (30/9): WATCH_DOGS BadBlood DLC, Middle-earth Shadow of Mordor
Next post World of Tanks Racing Mode Goes Live