Getting Casual with Alodia Gosiengfiao 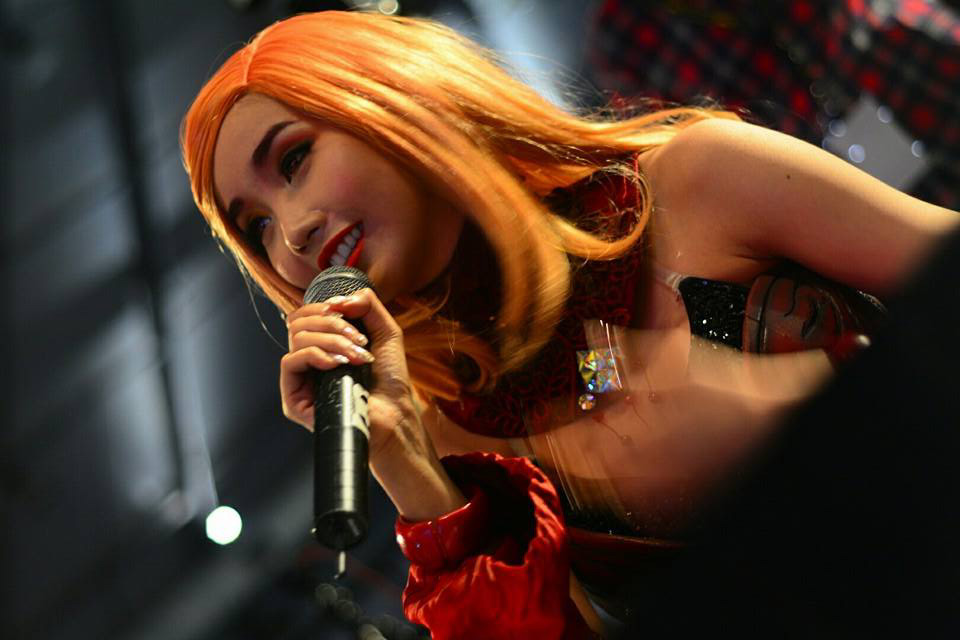 When the Queen of Cosplay, Alodia Gosiengfiao, grants you an interview opportunity. You grab it. Here to perform and as part of the cosplay judging panel at the recently ended GE3 event, Alodia managed to take some time off to share with us her favorite food, love for geeks, and more.

GA: You have been cosplaying for more than 10 years and have seen first-hand how the global cosplay scene has evolved. What do you think of cosplay then and now?
Alodia: To be honest, I’m happy that I started very early because cosplay costumes are now very intricate, complicated and amazing. Back then, it was a bit simpler, but there were ones who were really good, and those were the ones who inspired me.

GA: Which cosplayer inspired you the most then?
Alodia: When I started, I looked up to Yaya Han. She’s really cool and we got together because of cosplay.

GA: Which is your favourite cosplay?
Alodia: Over the years, there are so many but I think I’m very biased to my Leena Inverse (of DOTA) cosplay. It’s special for me because I made it in less than two weeks for my birthday that year.

GA: This isn’t your first time highlighting in a Singapore cosplay event. What is your opinion of the local cosplay standard?
Alodia: Actually, I was very impressed with the standard when I came by for the first time. It’s different from the mainly robots-style back in Manila. You guys have different materials that we don’t have in Manila. Most of the cosplayers’ costumers here are very clean and very polished.

GA: What about when compared to Malaysia and Thailand cosplay?
Alodia: I haven’t been to Thailand, except when I was young and not for cosplay. Each country has their own specialty. I think in Manila, for example, we have a lot of robots-themed cosplay. I think it is very different country to country, with each their own styles.

GA: Do you think that pop-cultures like gaming, anime and manga have an influence on how cosplayers make their own costumes?
Alodia: I believe so. In Manila we don’t see some characters that, say, Indonesia has, like Power Rangers. We always have Transformers or Iron Man (in Manila), but we also have a lot of videogame character cosplays.

GA: We were talking about food earlier (before this interview). Is there one particular food you must have whenever you’re in Singapore?
Alodia: I really like beef rendang, but it’s very heavy and I will only try that after an event (laughs).

GA: What else do you do besides cosplay in your free time?
Alodia: Free time? I rest! I normally don’t get to have much free time. My free time goes to doing other work and photo shoots, and spending time with my family.

GA: No time for gaming?
Alodia: My gaming life is pretty plain now. I don’t really have much time to spend on it, as my schedule is usually divided between Manila and Tokyo. I have a few days when I’m in Manila to travel to Singapore or Malaysia, so my schedule is pretty weird.

GA: I can see you have your Nintendo 3DS XL with you. Is that your favourite gaming handheld?
Alodia: Yes, and I’m currently on Pokemon Y (haha).

GA: Are you more of a PC or a console gamer? When you actually have the time to play games, that is.
Alodia: Recently I’ve been playing CounterStrike with my friends. Because it’s a game that’s been around, so everyone in my circle of friends are familiar with it.

GA: As in CounterStrike: Global Offensive, or?
Alodia: The old CounterStrike. Just during our free time, we head to the Net Cafes.

GA: So if someone gave you a choice between a PlayStation 4 or an Xbox One for Christmas, which would you pick
Alodia: PS4, of course! Because I’m a huge Sony fan. I never had an Xbox, just the PlayStation from the very first console.

GA: Okay, cheeky question. How can a guy approach you without freaking you out?
Alodia: Maybe he could just say that‚ “I’ve met you online or something” haha. Or we have something in common. Like we play a lot of video games.

GA: Would it help if he already knew who Alodia was?
Alodia: It doesn’t matter for me. I mean, it’s fine. I know a lot of people who aren’t into cosplay or video games. I like to educate them that cosplay and gaming is cool. Anything goes. I want them to respect what we (cosplayers/gamers) do. It’s not like we have no life.

GA: Uh oh. Your mom is giving me the evil eye. (Note: Alodia’s mother is her manager and minder)
Alodia: Don’t worry, my mom knows I like geeks! (chuckles)

GA: If you have the chance to make a game, what kind of game would that be?
Alodia: I’ve always preferred games that involved art. I like cute games, but also serious ones like World of Warcraft and Final Fantasy where the art style is very stylish.

GA: What kind of genre would it be?
Alodia: Hmm…probably a role-playing game.

GA: Like an RPG about Alodia…
Alodia: Maybe an RPG about her and she can change outfits and they have different powers for each ones.

GA: Any last words for our readers?
Alodia: I hope I can play games with them sometime! That would be really cool. Set up a LAN Party or something. Just a gaming party for your readers and me.

Aaron Yip is an industry veteran with more than 15 years of experience. When not spending time on his gaming PC and consoles, he can be found in Hyrule solving ungodly puzzles and collecting gems.
Previous post HyperX Dota 2 League S4 Finals in Las Vegas This Week
Next post Interview with Wargaming.net's Jasper Nicholas