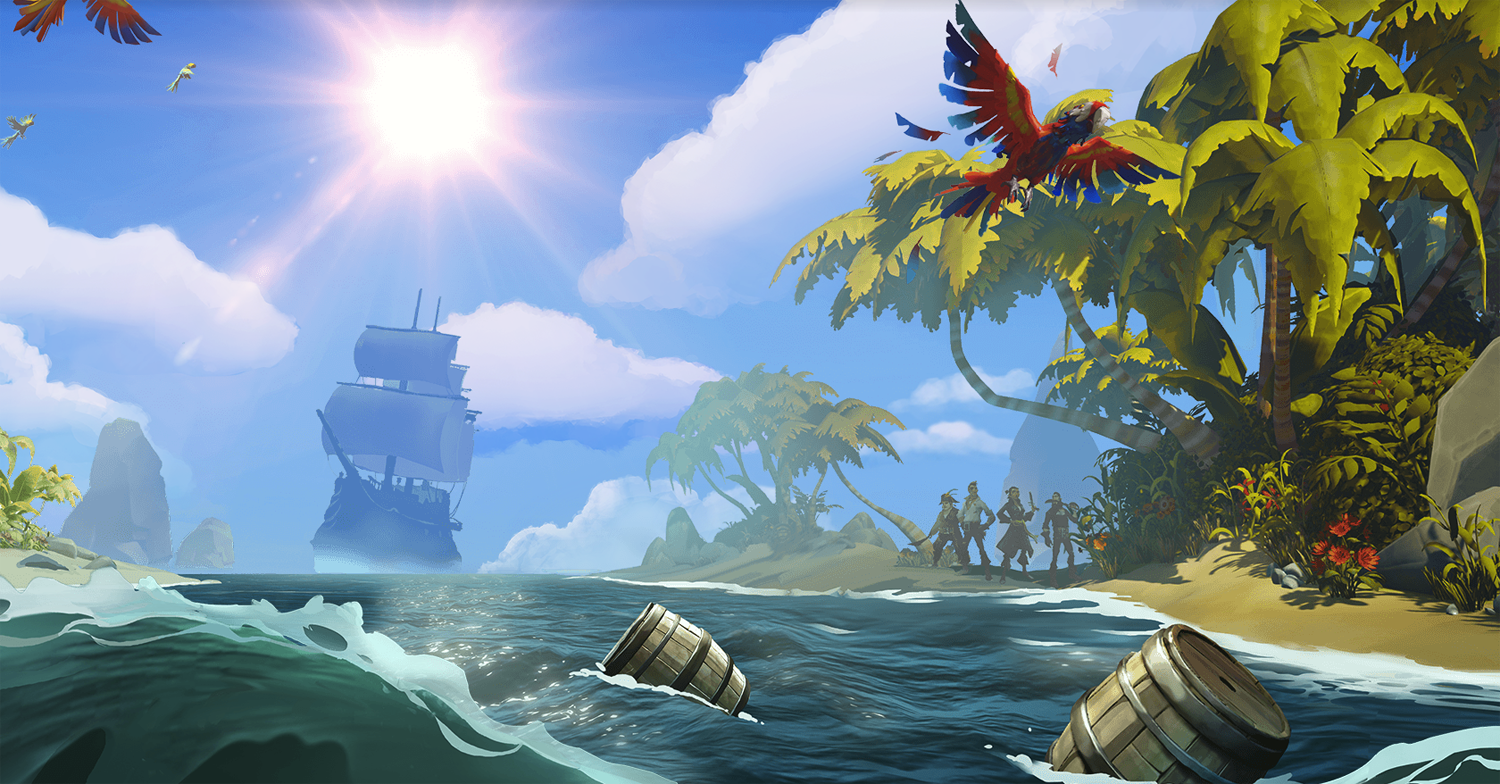 Eighteen months ago, Rare reached the point where they were faced with the decision of what to make next. The company has been around for about 30 years and over that time they have created quite a fair bit of games of different genres. What they wanted to do next had to be something different, so they took a look at what are the kind of games played by gamers and if there were any emerging trends to look at and go “what could we do in that area and how could we take this idea and leverage the Rare charm and humour that our games tend to have?”

The answer is of course, Sea of Thieves.

“We’re also interested in how players actually play together in these worlds. So rather than putting players together individually and hoping they come together and do things, we wanted to actually put players in as a group from the start. So the kind of things you see when you get players together is interesting which was what we wanted,” Gregg Mayles, Creative Director at Rare, added.

So how did the pirate theme come about? Gregg told us that they had wanted various small groups of players together, or bands of them. A crew on a pirate ship was a perfect fit for what we wanted to achieve.

It also helps that everybody knows what pirates do. In a mainstream sense anyway, especially if you are familiar with books like Treasure Island and movies like Pirates of the Caribbean. There isn’t a need to have to explain to players what and how the game function, as long as they wear their pirate hat and think like one. For instance, with Sea of Thieves, there isn’t a need to have to tell player crews that they swing across to a ship and climb a ladder, raise the anchor and pull the sails to sail. Rare is confident that players will be able to figure that for themselves because they’re so used to seeing this in other forms of media.

“So we thought that was like a massive windfall because we wanted a game where we could just put these groups of players and they could go out and have fun,” said Gregg.

With the Sea of Thieves E3 build that I played, Rare focused on that core experience of co-operatively crewing a ship together, with some of the fun bonding activities like drinking grog and playing musical instruments together. These are there for the players to bond and have fun and be social with.

Gregg tells us more in details during our hands on with the game.

Could you share the social aspects of the game and how would it work?
There are several ways of doing it. The easiest is to know the players before you actually play as a group, like friends you already know coming into this game together and forming a crew. That’s the ideal way to play this game. But we know not everyone’s going to be able to do that.

There needs to be a way of getting players who don’t know each other together for them to have that same magical experience. It’s great if like-minded players can have a way to come together. We started working on that ourselves in the studio. This game needs that looking for group feature. Players that want to go on the same quests as you. That’s going to be the kind of critical thing about this game.

You have to be able to find players to play with. Or if you want to go at it alone, you can do so. It’s our hardest challenge to get players to get together on the boat, some will want to play on their own. Whether that’s because their friends aren’t online or they’re not in the mood to play with people they don’t know, or if they’re just anti-social.

But obviously the size of the ships will matter too…
We’ve prototyped different sizes of boats and we have boats more suited to one or two players that are much smaller, but can’t take as much damage before they sink. But they’re a lot quicker too.

How big is the world of Sea of Thieves? And how many players can be on it at one time?
It’s something we haven’t finalised yet. But the way we approached it was to get the balance of the number of ships in the world right. How often will you see another ship will be important to the experience. We don’t want it to be so empty that you’ll never see another ship, yet we don’t want it to be too crowded either. That’s where our systems will be working in the background to figure out what the right number of players in the world is at any given point.

What’s the maximum crew allowed on a bigger ship?
This boat here (on screen) is one of the larger ones in the game. Four or five players is quite the right number. It’ll be dependent on the boat. A boat may have a smaller crew than intended, but it’ll need to have an optimum number where it feels right.

We’ve tried with different numbers. When you have too many people in the crew, you lose the feeling of bonding as a crew. You’ll be split into smaller groups even though you’re the same crew on the same ship. People just don’t bond as well. We really wanted it to be a rich, social experience where your relationship with the players you’re playing with in your crew is really strong and personal. As soon as you start going bigger in numbers then you just start having people running around.

Can you tell us more about the in-game progression? I’d imagine you start with a small ship and work from there.
You can imagine yourself as a penniless pirate dressed in rags and you want to become a pirate legend in fine clothing and awesome weaponry and cool equipment with the best ship. We have a progression system.

With missions and objectives to earn in-game currency to buy all of it?
Yeah. You get treasure and you want the loot, you’ll want to spend it. Personal progressions are around you and also on weapons and objects that you can carry. Everyone wants to own a ship or ships and make it look like they want it to look cool. These customizations aren’t just aesthetics but functional too. So a larger sail that looks cool will also makes your ship move quicker too.

Part of what we want to achieve is that if you think of what you can do in the game, you should be able to do it. So if two ships pull up alongside, and if you want to jump across them and take over the ship after getting rid of the other crew, you actually can.

If your boat is stolen by another crew, it effectively becomes their boat. And you just get another version of your old boat. Like how your boat will become theirs and your identity is wiped from it. They get to keep a copy of your old boat and you get yours back.

So is it essentially a PvP game or is there a PvE element to it as well?
Both. Players that go on quests and fight creatures are facing the PvE portions of it. It all happens in the same world.

Any island bases?
Not really. We wanted the ship to be like your home, so you’ll be sailing around it and make it feel like your home with the customization features. The furniture in your cabin. The rugs. And how you decorate it. Kind of like a mobile home. And when other players come into your ship it feels like you’re inviting them into your home. And likewise for others, when you’ll be curious to see how they got theirs done.

Sea of Thieves will be available on both Windows 10 and Xbox One. No release date has been set yet.

Aaron Yip is an industry veteran with more than 15 years of experience. When not spending time on his gaming PC and consoles, he can be found in Hyrule solving ungodly puzzles and collecting gems.
Previous post Behold the new king, the NVIDIA Titan X
Next post Giveaway! In-game hints for Disney Catch Catch