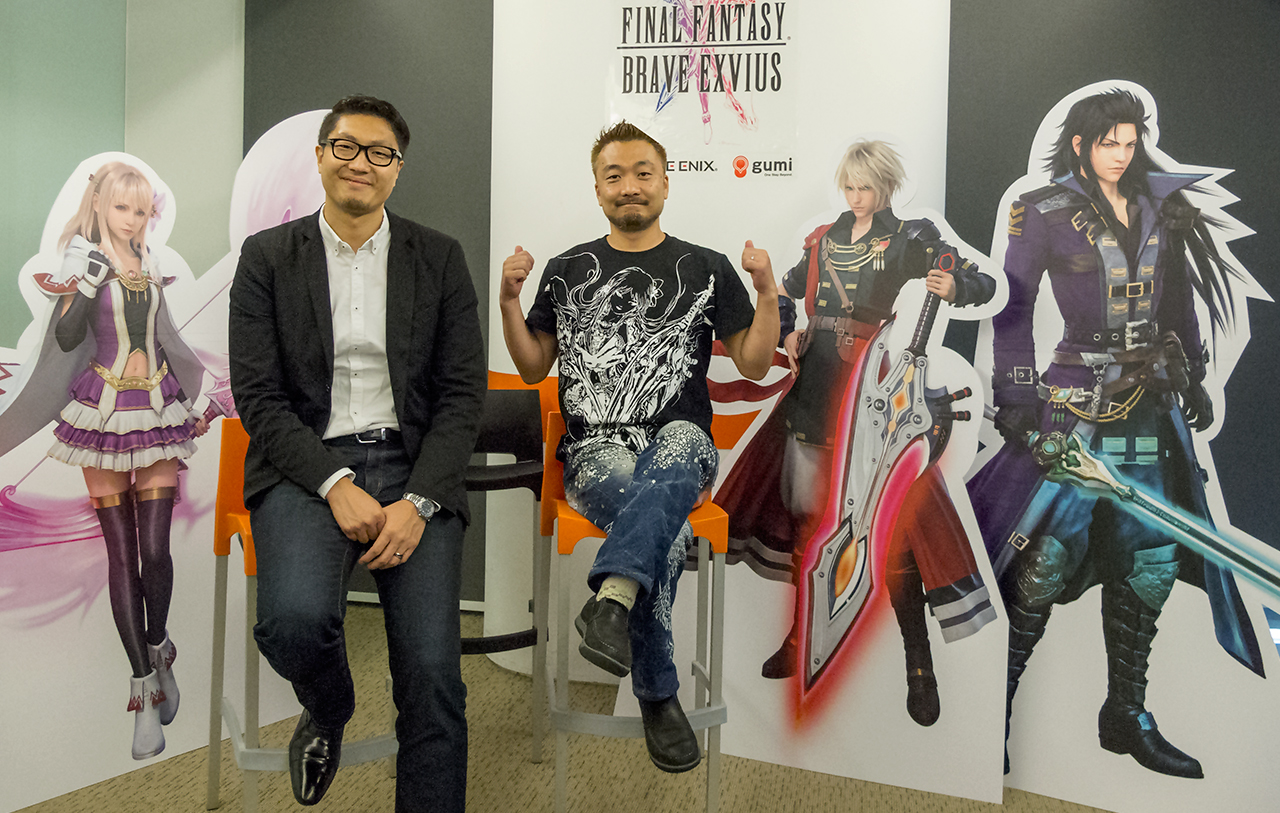 Unlike the company’s previous traipses into mobile, this was a genuine attempt at recapturing the classic JRPG experience, with wonderfully rendered sprites, side quests, and an original soundtrack to boot. It’s still a gacha game for all intents and purposes and, as such does suffer in a few areas, but if you’re looking for something different (and laced with nostalgia) then this is one app not to miss.

We managed to catch up with FFBE producers Kei Hirono and Hiroki Fujimoto, both of whom were in town to visit gumi Asia’s office. While gumi’s Japanese counterparts at Alim developed the game, it’s the Singapore outfit that handles all aspects of global operations.

Hirono works on the Japanese version and his past stints include Bandai Namco’s Dark Souls as publishing producer. He hopped over to Square Enix in 2012 and has since produced Imperial SaGa and a live-action TV show, Jitsuzai-Sei Million Arthur.

On the other hand, Fujimoto oversees the worldwide version of FFBE. His career with Square Enix spans all the way back to 1992, starting as an assistant producer on E.V.O.: Search for Eden on the SNES before eventually shifting to mobile games such as Ogre Battle and Final Fantasy III to VI – he’s the one to thank for adding international languages to those mobile FF ports.

Square Enix being the colossal organization it is, both producers hail from what is known as Business Division VIII, its focus being mobile and browser games. It’s not the only development team working on those platforms but it did mean our guests couldn’t talk about other titles (cough Final Fantasy XV), PR limitations aside.

(Note: Answers were provided via a translator.)

Congratulations on five million downloads! What was the team’s reaction like that day?

Hirono: Thank you. We were very happy and surprised to achieve that so quickly, but it also made us realize that Final Fantasy is still very popular around the world.

Story in gacha games is quite hard to tackle because you’re always facing new content, new updates with every patch. Will we ever see a conclusion to Rain and Lasswell’s story or will it be open-ended?

Fans love the music. We’ve already had a chance to speak with (composer) Agematsu-san so tell us your side of the story. How hard was it to get original music for a mobile FF game?

Hirono: It was difficult. Because this is the very first time that we’re doing an entirely new Final Fantasy and on the mobile platform. When we first spoke to Agematsu-san, he was very happy that he was able to start working on a Final Fantasy game. But at the same time, it was also a lot of pressure for him to deliver on this project.

So how we were able to create these wonderful tracks: We were speaking to Agematsu-san and the challenge was to bring up the goodness of this game – with the pixel art and all the classic flavor of the game – we’re respecting that but at the same time developing the title, creating new music for it.

When you listen to old songs, when you remember them it’s with a sense of nostalgia; so it’s how to evoke that nostalgia while at the same time keeping things new and fresh.

Could you tell us what your favorite track is?

Hirono: Ahh, that’s a tough one but I do like the battle theme. From Final Fantasy I to VI it’s done by Nobuo Uematsu-san and the key point of this is the starting of the song, the “ta-ta-ta-ta” theme; this was reproduced faithfully in the Brave Exvius theme.

For Final Fantasy, characters are always a strong part of the license. Could you tell us what’s next for Brave Exvius? Recently you talked about FFIX – Zidane, Garnet, and Amarant etc. – so is there anything else you can share with us?

Fujimoto: In the Japanese version we have Final Fantasy XIII and Final Fantasy Tactics already released, so these will make their way into the Global version at some point. At which point exactly we can’t say yet. We’ll be looking at balance adjustments and so on before we introduce them to Global.

Hirono: Of course, we also listen to what our fans have to say, so if there’s a certain character or a certain series that they would like us to release in Brave Exvius then please, send us your feedback.

Will Global get to see any exclusive units?

We also have some characters in the Japanese version that may not make it to the Global version in that exact state; they’ll be tweaked for Global release.

Recently we’ve had our first event, Demons Unleashed. Some fans liked it, some fans didn’t – they found that the Gravity Rod wasn’t worth their time and effort. After listening to feedback, what will you be tweaking for the next event for Global?

Fujimoto: The Demons Unleashed event was the very first Global-exclusive event so this was not run in the Japanese version of the game. Because of this it was created by the Global team. They did some calculations for balance and how quickly the event will be cleared but this, as you know, this was perceived positively by some and negatively by others. Based on this response we’ll take the results, we’ll analyze it, and use it as a base for the next event.

We’re thinking of other ways of balancing such as introducing help midway through the event or reducing the number of times required to run the dungeons or something like that. But we will take on board the feedback from players for future events.

Diving deeper into the topic of Japanese versus Global, some fans feel that the Japanese version is more generous with its Lapis and gifts. From a producer’s perspective, could you offer some insight on the matter?

(Hirono is genuinely surprised by this question and checks with another Square Enix staff member. The latter explains that when the Japanese version started it did not have a log-in bonus system so the only option they had was to just give away 100 Lapis [the in-game premium currency] every day.

For the Global version, they managed to get the log-in system running from the beginning, as well as the daily quest system, so there are more ways to collect items and Lapis. According to him, users playing Global have more chances to get more things compared to Japan.)

FFXV Kingsglaive has started showing in Singapore. With the game coming out soon, will we see any FFXV characters in Brave Exvius?

Hirono: We can’t say anything for now. (Laughs) But I’ve already seen Kingsglaive and I like the character Nyx. I think if this kind of cool character was to be introduced in FFBE then many fans will be happy.

To wrap this up: Would you rather fight 100 Cactuar-sized Chocobos or one Chocobo-sized Cactuar?

(After some struggling to get the question translated, followed by much laughter and pondering.)

Hirono: Hmm. We’ll think about it!

Thanks for your time!

Final Fantasy Brave Exvius is available now for both iOS and Android devices.

Before you go, don’t miss our interview with composer Noriyasu Agematsu!

Ade thinks there's nothing quite like a good game and a snug headcrab. He grew up with HIDEO KOJIMA's Metal Gear Solid, lives for RPGs, and is waiting for light guns to make their comeback.
Previous post Distant Worlds: music from Final Fantasy returns to Singapore
Next post Overwatch’s new “The Last Bastion” animated short has too much feels