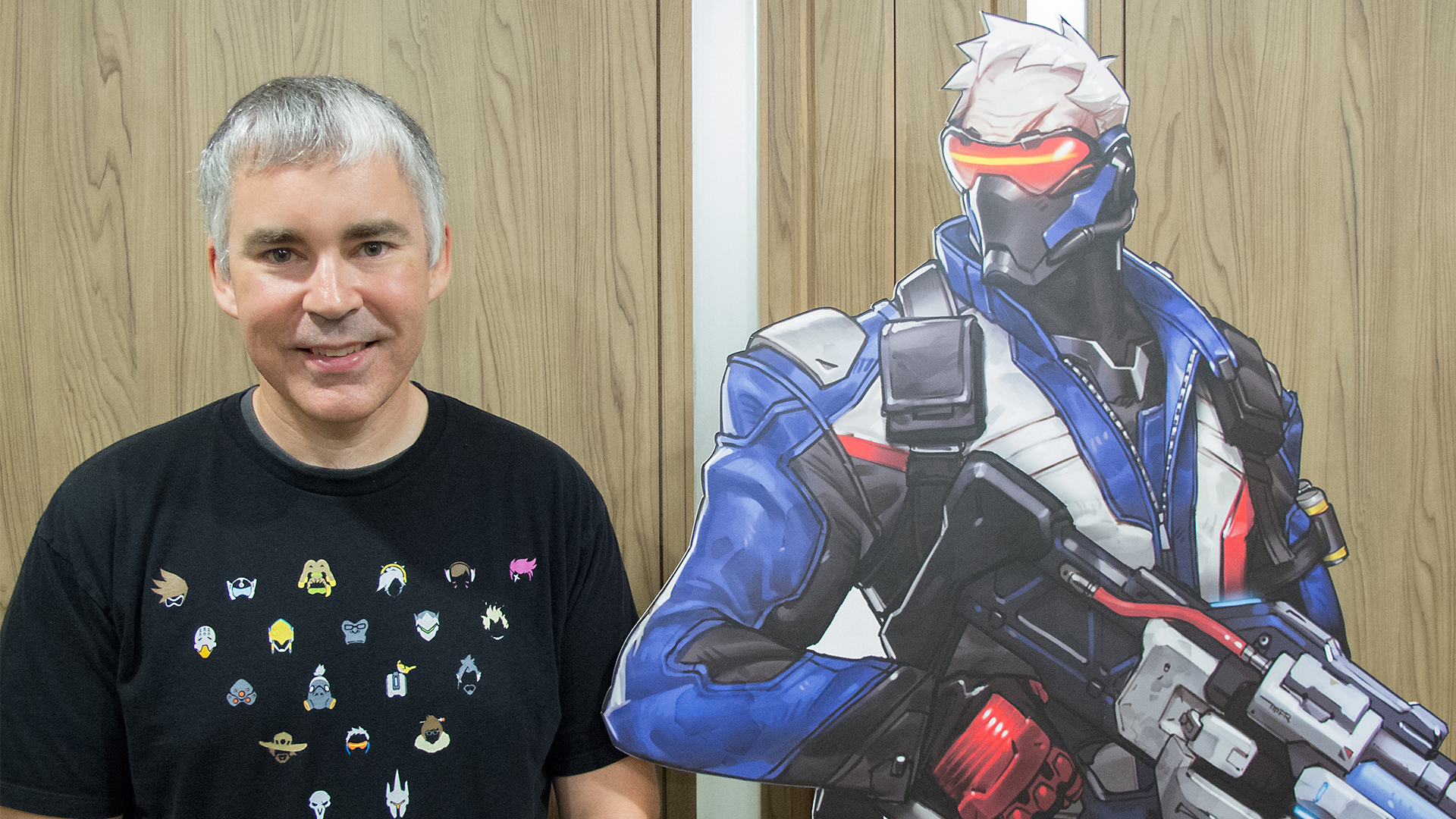 Where Blizzard Entertainment’s Overwatch goes, the crowd follows. This past weekend (May 28-29) saw massive queues forming in and around Capitol Theatre for the Overwatch Launch Weekend, where fans got to enjoy freebies, caricatures, and other fun activities.

We slinked away from the madness to find Bruce Wilkie, Principal Software Engineer at Blizzard Entertainment, guarded by cardboard standees of Soldier:76 and Tracer. Both a Mercy fan and tech support wizard, he tells us what working on Overwatch has been like, what Genji’s ultimate used to be, and what to do if the game crashes on you.

Having been with the company since 2008, Wilkie has seen first-hand the growth and evolution of the ambitious Project: Titan into the Overwatch we all know and love today. It’s been a momentous effort for a release that’s full of firsts for the California-based studio: their first shooter, their first new IP since StarCraft 18 years ago, and their first simultaneous release on both PC and consoles.

Primarily responsible for the game’s rendering and lighting, Wilkie cracks a smile as we ask what working on a project as big as that has been like.

“Hard. Challenging. Each platform has its own challenges and you have to address all of them; you have to make sure your code runs well.”

They spent most of the time optimizing so as to achieve a “solid 60” frame rate whenever a player is in control of their character, not only for the two consoles but also for the many hardware configurations supported on PC.

“Xbox is its own beast. It has a very specific memory architecture and your code has to take advantage of that or you’re never going to hit 60. PS4 has a more unified memory architecture but it has its own set of challenges. It’s different coding for the PS4 than it is for PC [and Xbox].”

Thankfully, they received great support from vendors such as Intel, NVIDIA, and AMD to help throughout the whole process. Good code aside, hitting frame rate targets demanded that they use available hardware to the best of its ability.

But mulling over scripts and technical logs wasn’t all he did.

“One thing I absolutely love about the Overwatch team is that we’re so collaborative. When you look at our line-up of 21 heroes you may think: ‘Where did they get all these ideas?’ Those ideas came from our entire team.”

“We would have meetings where everyone would just come in and brainstorm about hero prototypes, and our game designers would listen to all that. And, you know, a lot of the ideas were not so good – mine included – but they would take inspiration from that and come up with some really great stuff.”

“If you look at the Bastion we announced in 2014 at BlizzCon and the Bastion we have today, that’s a great example of how iterative character development is on the Overwatch team. His ult (ultimate ability) has changed, I don’t know five or six times, across these last two years and it shows you that we’re willing to make changes – if an ult doesn’t work we’ll change it; if a character doesn’t fit we’ll change it.

“At one point Genji had an instakill ultimate where he would impale you with his sword on the ground,” he says while mimicking a two-handed, downward stab. “You would just die and it was not fun. We had to drop that.”

With their attention now turned to post-launch support, we asked Wilkie, who is pretty active on the Overwatch tech support forums, how players could make their lives easier when it came to troubleshooting.

“We saw a lot of people face challenges running overlays like Discord (communications platform). We actually reached out to Discord and worked with them to get that fixed but D3DGear (game recording and streaming) is one that still causes us some problems.

“If people are crashing, the first thing to do is to check your third-party applications. Are you doing something that’s hooking Overwatch? Because we have to be very careful about what we let people do due to anti-cheat and that kind of stuff.

“The other thing is to make sure your PC has good cooling. I can’t stress that enough. I see that so many times in the forums, where people go: ‘It plays great for about ten minutes and then my entire PC shuts off. What’s wrong?’ It’s really hard to help those people because it’s like, well, go buy a can of compressed air and clean out your PC and hope your fan is still working.

“Overwatch – in fact, one of tech support people just recently made a big post about it – Overwatch will use a 100% of your PC if you let it. And to do that it has to be well cooled.”

Unsurprisingly, we couldn’t get any details on future content so we asked him something any player can relate to: his favorite moment from the game.

“We play Overwatch all the time and we have for the last two or three years. We ran internal tournaments – it’s all for pride, right, there’s no prize pool in this – but we would form teams and then compete with each other.

“Mercy is far and away my favorite character. This was back before her Resurrect was nerfed radius-wise, and there were several games that I was basically able to change the course of because I would essentially rez after a team-wipe.

“And we had amateur casters on the team casting and they would shout out, ‘Huge rez!’ and that was awesome. I loved that, it felt great.”

As would all the other Mercy players out there, we’re sure.

Check out more photos from the event below. Alternatively, start making your own memorable plays in Overwatch, available now for PC, PlayStation 4, and Xbox One. 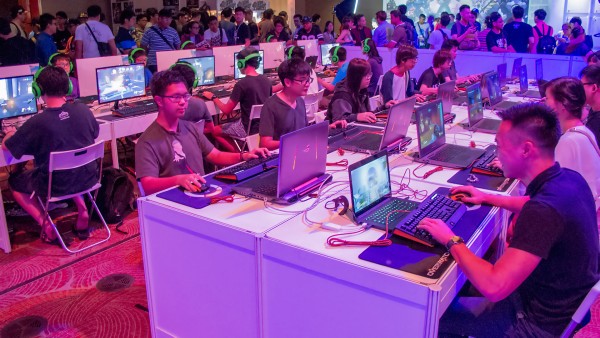 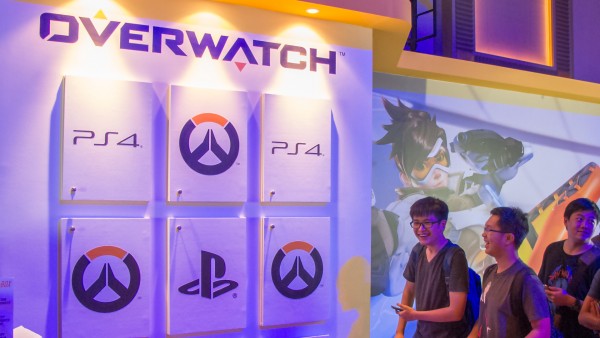 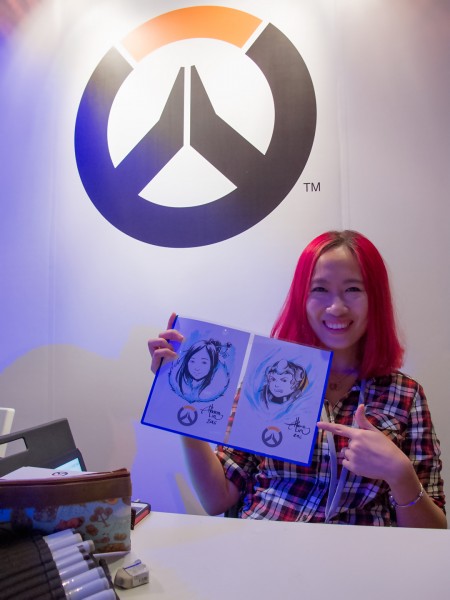 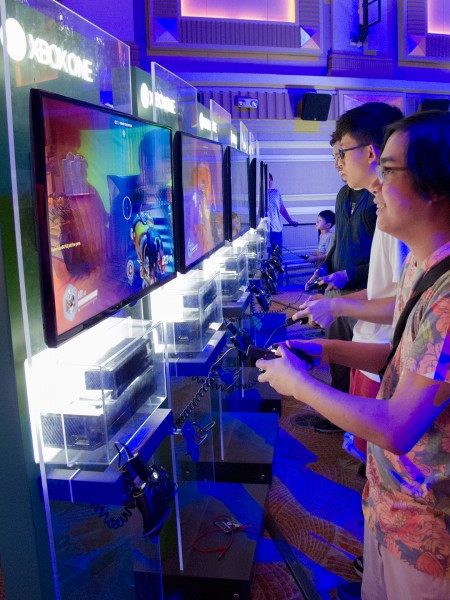 Ade thinks there's nothing quite like a good game and a snug headcrab. He grew up with HIDEO KOJIMA's Metal Gear Solid, lives for RPGs, and is waiting for light guns to make their comeback.
Previous post ASUS refreshes its ROG line-up and then some
Next post MSI shows off its fastest GeForce GTX 1080 with the Gaming Z edition