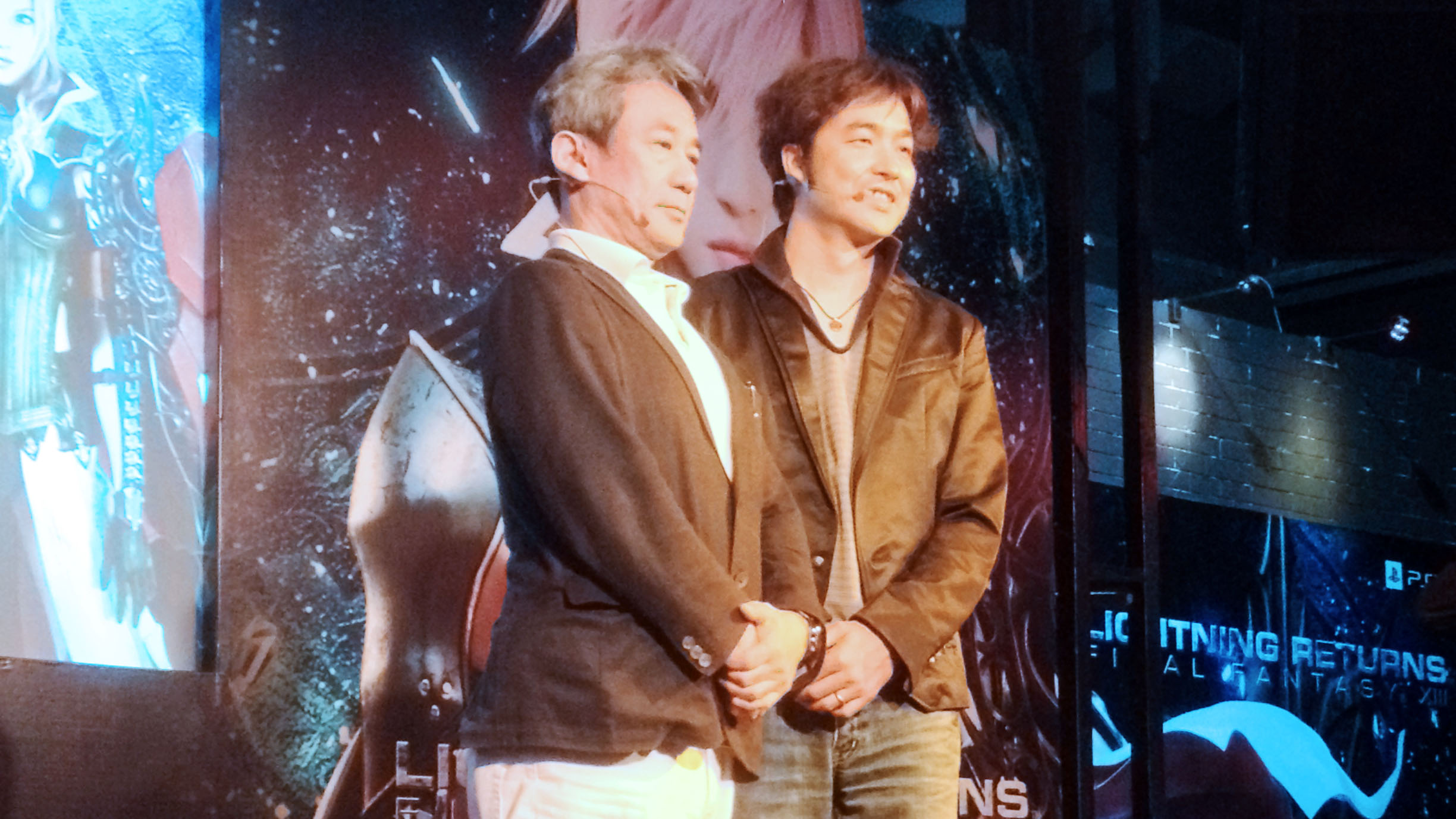 Could you tell us a little about Square Enix’s latest developments in the Final Fantasy series?

Shinji Hashimoto: Final Fantasy X and X-2 was first releases ten years ago. We’ve seen great development in our visual quality. So we have taken the two popular titles and put out a remastered version for you to enjoy again.

Toriyama-san, could you share insight and lessons over the course of development of the three games in the Final Fantasy XIII series?

MT: Final Fantasy XIII’s planning and development started when the PS3 was released, and the basic engine of the series has taken us five years for the whole development. Through the release of this series, we listened to feedback from fans and carried out improvements of each of them. This is what I’ve learned the most from the development of these titles.

Lightning was the first female protagonist for Final Fantasy. What made you go for her instead of the traditional male hero?

MT: Most of the protagonists have been male characters, but this time we created a female character that looks cool as the heroine in the eyes of male gamers.

What inspired the drastic change in battle systems compared to FF XIII and FF XIII-2?

MT: Compared to XIII and XIII-2, the battle has become speedier than before. We portrayed Lightning in a cooler way so she stands out more. With the style changes in the battle system we can present her in the better way.

The game has been out in Japan for a while. So this question is about the ending where Lightning appears in a place that looks like France. Does this mean the game takes place in the universe that we live in?

MT: This is the ending of the whole XIII series, so we have quite an epic ending to it. We also like to tell the story in the form of an epilogue. We cannot reveal too much about it, but yes, Lightning is playing in a world that is similar to our own earth in a rural town.

The sales for FF XIII series has been fluctuating from high and low in Japan. Do you think such sale numbers is because of brand fatigue?

MT: The trilogy has achieved the sales of 10 million copies and this is a satisfactory result for us. Even compared to previous titles in previous series.

Hashimoto-san, producer Yoshinori Kitase has previously expressed interest in releasing a HD remaster of FF XII on PS3 and Vita if FF X and FF X-2 did well in sales. From the looks of it, it looks to have done very well in Japan and is poised to do well in the rest of Asia. Is this good news for those expecting the remaster of FF XII in the future?

SH: If there are requests from fans, we would work on it, but at this moment there is no such plan.

In FF X, the turn-based ATB (active time battle) system is still used when compared to Lightning Returns. Does Hashimoto-san feel that ATB is going to be something we will see again or is the real-time system is a natural progression from the ATB system?

SH: There is no model answer for which is the best battle system for FF, but every time when we make a title, we strive to make something that is better then the previous title. For every title we have different directors, so when a title is produced, it’s up to the decision of the director to choose the system he prefers, so there is no specific battle system that is better.

Having worked on so many Final Fantasy games, which one do you consider the most groundbreaking and why?

SH: Personally, when I started from FF VII and it was from that title when the format changed to CD-ROM, it was a breakthrough for me.

What was the technical challenge that Square Enix encountered while working on the HD remaster of FF X and FF X-2?

SH: When producing the HD version, it was a big upgrade of the resolution from 4:3 to 16:8. There was a lack in materials to carry out the upgrade. Also because the two titles was previously released ten years ago. There was much effort involved in rebuilding the whole thing.

MT: It has only been around 1.5 – 2 years since the release of FF XIII-2, so the time for developing a new RPG game was relatively short for Lightning Returns. And also in Lightning Returns, we challenged to build a new game system and introduced the concept of time-management and increased the payers’ level of freedom in exploring the game. I’m pretty proud of what we’ve achieved, but some gamers felt that the time-management aspect of the game was difficult to handle.

What are some of the biggest problems faced when localising a game for an international audience?

MT: AS this is an RPG game, the story is pretty important and to translate the nuances of the Japanese language to international gamers. With the localisation team, we have built up the relationship with them and they are familiar with the localisation and develop quality localisation work with less amount of time.

Now that the FF XIII has come to a close, do you feel that we will come back one day again to this universe?

MT: We know that Ligntning, compared to other characters, is really popular so there is a possibility that she will reappear in other upcoming titles but not as a protagonist.

Because Lightning Returns is one of the larger FF games in terms of the environment, do you feel that the story-telling has been impacted in any way?

MT: As there is an open-world environment in Lightning Returns that offers players a greater level of freedom. Because of this, the order of story-telling the way we want is hard to follow, along with the side-quests. We’ve tried, through trial and error, to create a way of story-telling to convey what we want.

Do you think DLC is a route Square Enix will go down for future games?

MT: Whether we want to push out DLC depends on the performance of a particular title. From now on we will try our best to keep our players playing for as long as possible. This is something we can think about.

There has been a lot of reviews for Lightning Returns from the West, which have been mixed. Why do you think the reviews are so?

MT: I haven’t read all the reviews, but since there is a time concept in this game, it’s usually the culprit when people see it as a time limit as the players freedom is reduced. This actually depends on the gamers. After the game was released in Japan, the reviews became better. So play the game a bit more and you’ll start to understand more about it.

Now that the Lightning Saga is over, what would you miss most out of the series?

MT: It has been seven years working with Lightning, and the next title will not involve Lightning and I feel she will be missed.

SH: One point to note is that the facial details and expression have become so much better and the event scenes have become more realistic.

Are there any ones that you like in particular?

SH: There are many, mostly the scenes where Tina appears.

As I understand, the HD remaster of FF X and FF X-2 has Cross-Save support, but not Cross-Buy. Would there be any promotion where FF fans can buy the PS3 version and get the PS Vita version at a discounted price to reward their loyalty? Or will there be a PS 3 and PS Vita combo bundle of FF X?

SH: There will not be any discounts and we do not have any plans to release a combo for these games

Will there be a movie of Lightning?

SH: Not at this moment, but there is a possibility if she remains popular among the fans.

During the remastering process of the game, was there any point you felt you wanted to redo the whole thing again than sticking to the material you already have?

SH: The remake was actually a complete redo of the original materials, so there is no part I would like to redo.

SH: (The FF X and FF X-2 Remaster) is going to be released soon, and at this moment we don’t have any room to consider that yet.