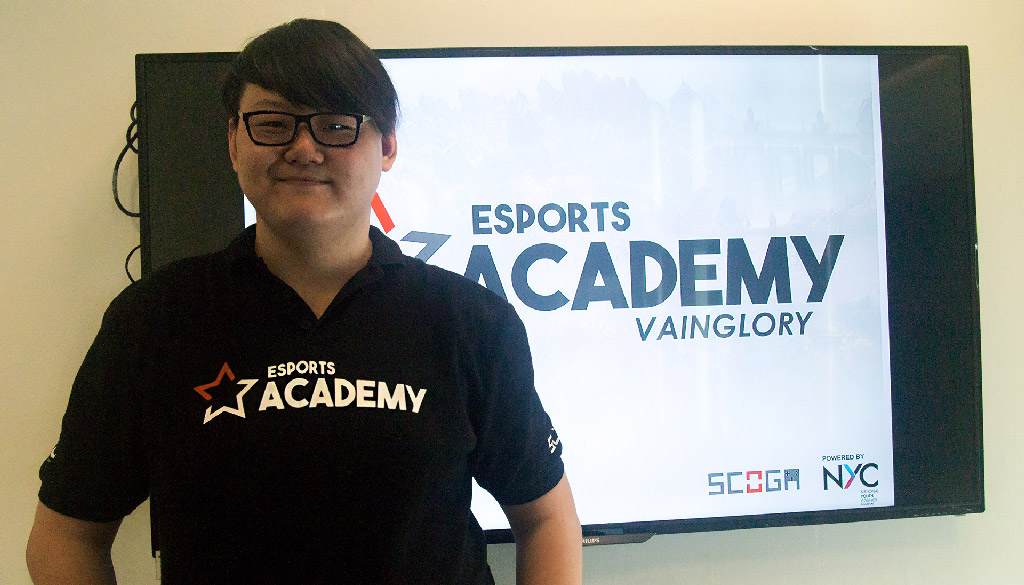 Having “Esports Academy Trainer” as an official title might seem inconceivable a few years ago, more so if you add “in Singapore” to the equation. Yet here we are in 2017, with a legitimate classroom full of young adult hopefuls, a syllabus sanctioned by the game’s developer, and the entire endeavor given the thumbs up from the National Youth Council. So what’s it like being at the forefront of this movement?

SCOGA’s Esports Academy has been in full swing at the National Library for quite a while now, offering a range of courses and activities aimed at developing burgeoning talent. Peek around and you’ll find one Fabien Ong leading the Vainglory Mastery Class, “designed for high level teams who have clear goals of what they hope to achieve in the competitive scene.”

Picture any class full of polytechnic students on a break and that’ll be the scene that greets you. Seated in rows with eyes glued to phones and tablets, the teams were busy practicing the art of the “stutter step”, an advanced technique that allowed players to cram in as many hits as possible. There’s a whole wealth of tutorials and discussion about it online, only here it’s been distilled into an actual theory-and-practice lesson with an instructor hovering over your shoulder. 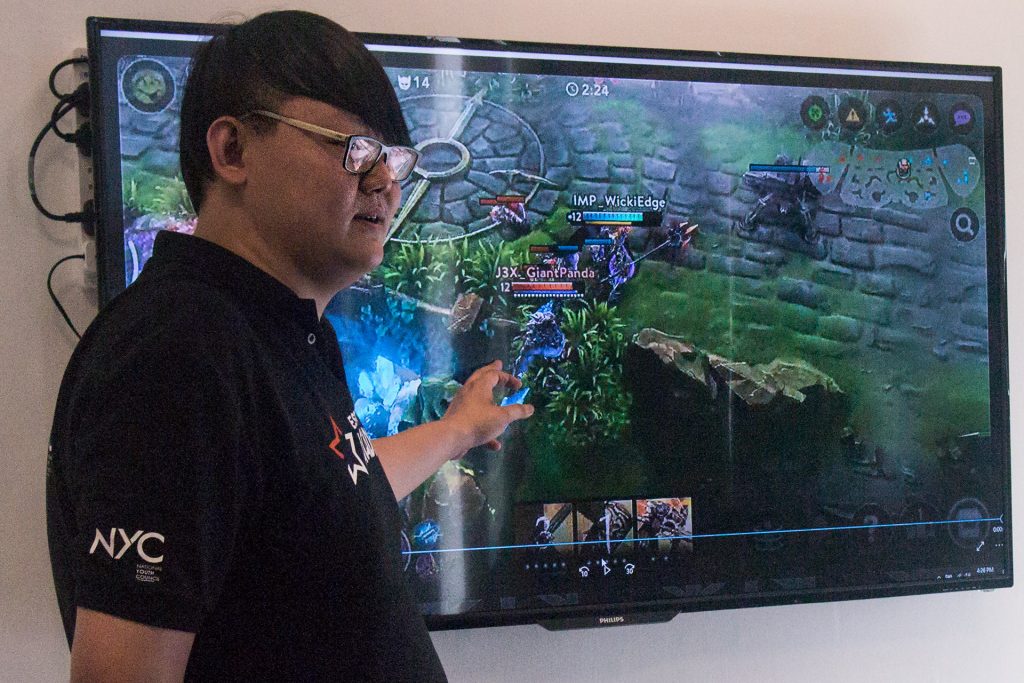 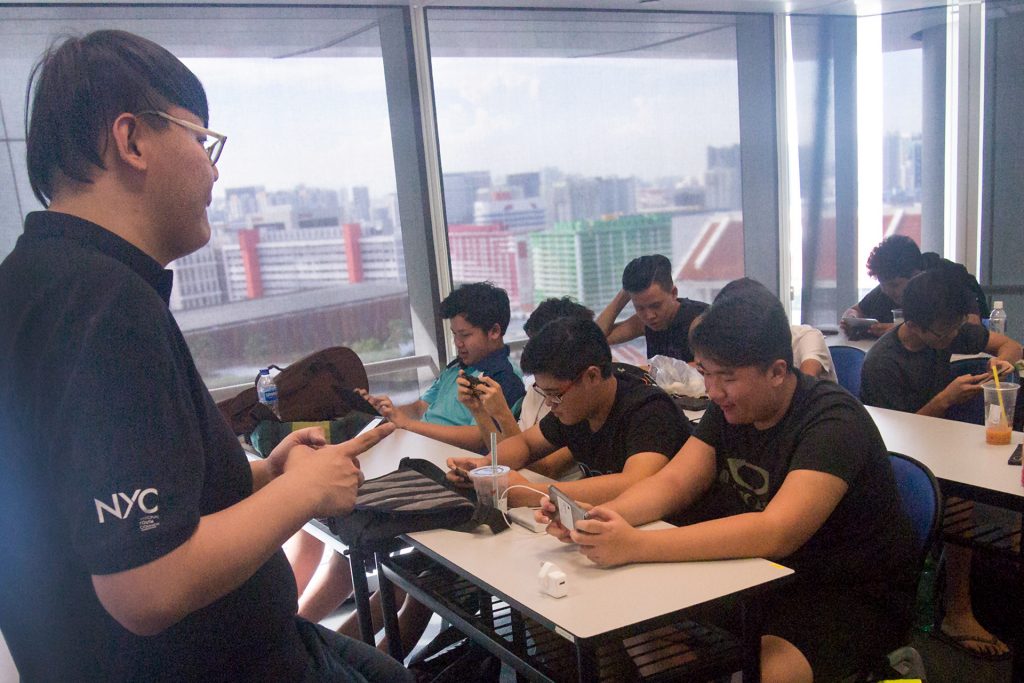 In many ways, it has the atmosphere of a casual classroom setting too, not the tense air permeating pro teams during practice and live matches. After intruding on their lesson for long enough, I managed to whisk their trainer away for a quick word on the course and what he was hoping to achieve.

Fabien’s a well-known face among the Vainglory community, not just for being a trainer but also for doubling as a coach and manager for Team Impunity, a world championship-level team. He was already heavily involved in the community before shooting up in relative fame, so imagine my surprise when he confessed to not being a gamer before discovering the Vainglory beta. It’s a testament to how quickly he’s picked up on the intricacies of competitive gaming, and if nothing else, a rousing testimonial for Super Evil Megacorp’s MOBA. As exciting as all this is, however, being an esports trainer is still just a weekend gig.

How long have you been a trainer with the Academy?

For a few months, since March all the way till now. I’m training the Vainglory Mastery Class, so once students pass their Foundation course they’ll come to me.

Since you’ve been here from the start, did you help to formulate the class plan and everything else?

Yes. I’ve been playing Vainglory for very long so I know most of the content and changes that come with every patch.

Did you plan everything by yourself or was there a team you could discuss things with?

For this course, I will definitely discuss with the pro teams who make it to the world tournament. Nobody can be a hundred percent sure or always correct, so we have to learn from others and get feedback from not just the pro teams but also the students. If the course doesn’t help you then there’s clearly something wrong with my lessons.

Could you share what goes on in a typical class?

First, I’ll share the PowerPoint that I’ve prepared followed by a set of activities to practice because, you know, practice makes perfect. After that I’ll help to identify their weaknesses, let them know what the pros and cons of their decisions are, where the issues are coming from. Normally it takes a third-party to spot the issues because you’re too busy focusing on the game. Overall, you could say we’re simply trying to create more good players in Singapore.

Does the Mastery class just cover the technical aspects of the game?

We not only cover in-game play but also how to establish a team. Nowadays, many players will think, “Oh I won this tournament, I expect sponsors to come look for me.” So what we’re letting them know is that it’s actually about what you can do for the sponsors, not what the sponsors can do for you (laughs). Here in Singapore there’s no one teaching them what’s right or wrong […] that nothing comes easy. I mean, if you want easy money then you should go work in fast food than trying to play in esports.

We also teach them about communication, game mechanics such as hero pulls, drafts and bans. We try to cover every area that we can before even talking about the competitive path.

I saw the students were all grouped into teams. Are these groupings fixed for the entire course?

No, I will normally recommend them to change partners every lesson because no matter in games or real life, you cannot choose who to work with. So you have to learn how to adapt to other player’s play styles. This is most important because when you join an organization, you never know, one day a person might get removed and you have to learn to work with another person.

What do you think makes Vainglory different from other esports?

What I think makes it so popular right now is that its mobile, you can play it anywhere you want. Another good thing about the game is the balance, there’s no over-powered hero that needs to be in every match, and there’s also a balanced draft and pick system so Hero A can counter Hero B, Item A can counter Item B. It’s this whole strategy that I find very interesting.

Come cheer for Fabien and Team Impunity at the Vainglory World Championships in Singapore. We’ll have more details about it soon.

Ade thinks there's nothing quite like a good game and a snug headcrab. He grew up with HIDEO KOJIMA's Metal Gear Solid, lives for RPGs, and is waiting for light guns to make their comeback.
Previous post Building communities: Vainglory’s road to success
Next post Monster Hunter: World will be available for PlayStation 4 and Xbox One globally on January 26, 2018