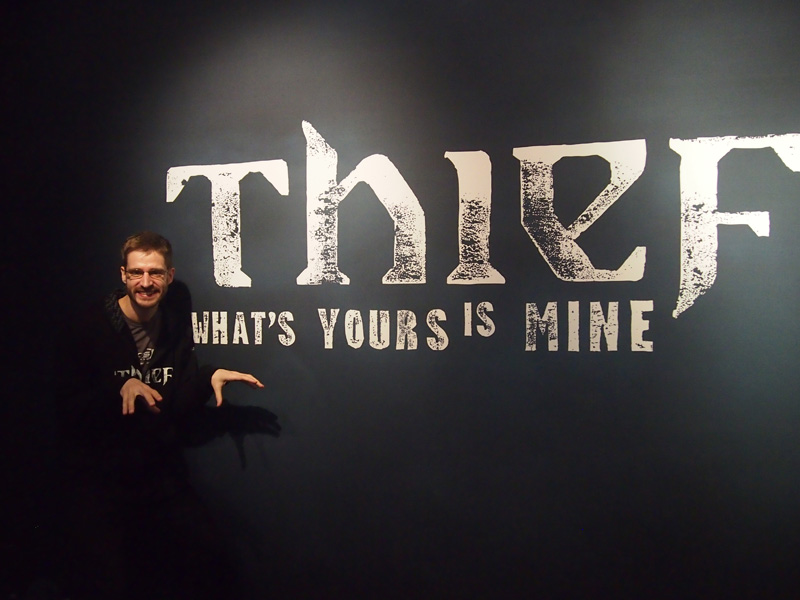 Thief is coming out in 2014 for PlayStation 4, Xbox One and PC. The game is being created by Eidos Montreal – the same guys who made Deus Ex: Human Revolution. The Thief franchise started in 1998, where it defined the stealth genre. Two sequels was followed after by Deadly Shadows, which also became the last Thief game. As the new Thief’s Lead Designer Daniel Windfeld Schmidt reminded us, by the time the new Thief game comes out in 2014, 10-years would have passed since Deadly Shadows. And 10 years is a long time in the gaming world.

RGB: The original Thief set the benchmarks for the stealth genre. What does “stealth” really means to Eidos Montreal?

Daniel: That’s an interesting question.What’s important for us was bringing the cornerstones of the original game back, so we don’t add black-and-white morals in the game. For us, it’s important to play as a ghost, to complete the game without killing anybody if you could. It’s not mandatory for the game to work that way though, if you want to play it aggressively you still could. But true stealth was one of the things that made Thief stand out. It was never about killing. That’s what stealth means to us.

RGB: How long has Thief being in development for?

Daniel: The game’s conception started in 2009, when we announced Thief to attract talents so as to start a team. We worked as a conception team to get that essence back to what what is important for this game to work because this is a very different game. We want to make sure we have enough time to make it all work.

RGB: When Thief was first was released, it was considered one of the best stealth games. But now that several action games and stealth games have been released, what distinguishes Thief from the others?

Daniel: That’s a good question. What really makes Thief different is that a lot of these games are, from a game design point of view, action games with a stealth component. Thief is a stealth game with an action component. Most of these games don’t require you to go stealth to play the game, with Thief it’s the opposite. Players need to change their strategy to work with the game to stay out of sight. Suddenly, it’s not just aiming and shooting; you have to pick your battles. Now you have to put elements of a puzzle together and consider which tools to have and create your own paths to do so. When these things come together as a stealth game, it makes the experience much more different from all the other games that focused on the actions. You could do combat in Thief too, but it costs valuable resources. You don’t have infinite ammo, or infinite health. Your health does not regenerate. In our game, you’re not a killer – you’re a thief.

RGB: What’s the learning curve to the new Thief when compared to the older titles in the series?

Daniel: The way we tackled it is to give the players the option to adapt the game to their playing style. We haven’t finalised the final controls, but you can customise them to become “old-school”. Such as disabling all UI features and leaving just the audio on to hear what’s around you. You can also disable the icons. You can even disable the focus abilities if you want to play it like the original. This is how we scale to different audiences. Many haven’t played the original, but existing Thief fans will know what they want, and adapt the game to their expectations.

RGB: With this being on the next-generation console, will Thief make use of the new consoles’ social and game sharing features?

Daniel: We are experimenting with the options for that. Without going into specifics, you can imagine what you can do. One of the things about Thief is that it can become very competitive. We don’t have a lot of random factors. All the loot will be in the same place. You can plan your route, you can optimise. It’s pretty safe to say we’ll probably be able to share statistics (Ed’s Note: For instance, number of kills or lack thereof, etc…). We haven’t gone into how you can compare your them, but it’ll be in a natural direction to go to.

RGB: Will  the Console versions be any different from the PC version?

Daniel: We don’t want to differentiate them too much. We want to focus on putting out a good experience instead of balancing out the three different types of platforms. There are will be minor differences due to the different hardware, but as far as the gaming experience is concerned it will be as similar as possible.

RGB: Any chance you could reveal to us the multiplayer feature of the Thief?

Daniel: We want to focus on the single-player experience as much as possible, just like how the old Thief games were. There will be some online components, but we’re not ready to announce those specifics yet.

RGB: Any new weapons that Thief fans can look forward to?

Daniel: You have the regular arrows which you can use for stealth. You can shoot it away to create sounds that distract the guards. Or use it to take out guards. We also have the shadow arrow, a blunt arrow that can be used to manipulate guards. Then there are the aggressive tools that is new to the franchise introduced at E3, where you can set the guards on fire or ignite things to distract them. They all can be used aggressively or stealthily. We wanted to make sure your arsenal is very versatile.

RGB: Will there be any form of character or weapon upgrades allowed in the game?

Daniel: If you steal money, there’s got to be something to spend it on (laughs). Naturally, we will have something to use your money on. But we’re not ready to reveal what these are just yet.

RGB: One of the chief complaints about the earlier Thief games was that the game became a little too ‘fantasy-like’…

Daniel: I can’t agree more, and that’s why we don’t want to go too magical this time. We’re toning it down to give it a mystical feel to it. We want to keep you grounded, so the game’s immersion is very important. There’ll be no flying or teleporting around. But Garrett can tap on a unique set of skills known as ‘Focus’. For instance, Focus allows you see visual sound waves on the other side of obstacles. Players can also use it to spot loots or traps. It’s an enhancement skill, and not so much on “I can shoot fireballs!”.

RGB: Okay, last question. Will  the game tap on the Kinect or PlayStation Camera for the Xbox One and PlayStation 4 respectively?

Daniel: (Laughs) I can’t answer that one! Not yet anyway! (laughs)

Aaron Yip is an industry veteran with more than 15 years of experience. When not spending time on his gaming PC and consoles, he can be found in Hyrule solving ungodly puzzles and collecting gems.
Previous post Microsoft DRM Is To Emulate Steam, Says Anonymous Xbox Engineer
Next post Xbox One 'May Not Work' Outside Supported Countries