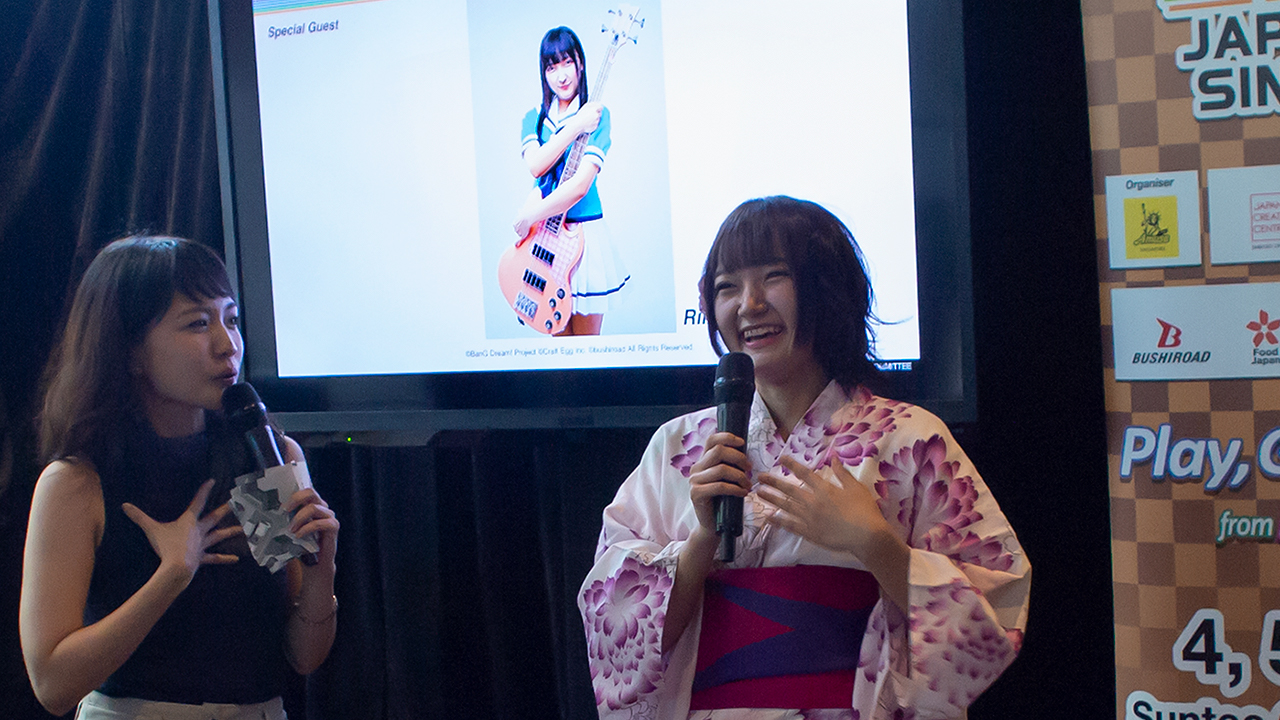 One of the musical acts slated for Japan Park Singapore this August is Poppin’Party, a five-member band that jams out to cheerful pop and light rock. While they  look like a typical girl band right out of Japan, they aren’t full-time musicians. Instead, they’re all voice actresses in Bushiroad’s mixed media project that is BanG Dream! (Bandori).

To be clear: while the ladies do play their instruments live, their recorded tracks are backed by studio professionals. Still, that doesn’t diminish the fact that the franchise has successfully taken after other idol-based mixed media projects, establishing fan followings both within and outside of Japan.

A recent contributor to their overseas popularity is the English release of BanG Dream! Girls Band Party, a mobile rhythm game featuring both original songs and popular covers. From there, there’s a plethora of accompanying content for fans to consume: an anime show with more seasons on the way, a regularly updated YouTube channel, and of course the singles, albums, concerts, and merchandise that BanG Dream! consistently puts out. Oh, and there are five different bands to follow (only two have live concerts), so if Poppin’Party’s music doesn’t do it for you then maybe Roselia’s will. Attending the Japan Park Singapore press conference was Rimi Nishimoto, the voice behind Poppin’Party bassist Rimi Ushigomi. Dressed in a pink yukata, the bubbly 23-year-old shared how her dream had always been to get into voice acting. At 19, she managed to get one foot through the door after a failed Milky Holmes audition, another Bushiroad-owned franchise, before finally catching her big break.

Formed in 2015, the BanG Dream! project helped to raise her from being a relatively unknown voice actress. While a few of the members did have musical backgrounds — Nishimoto herself explored piano, guitar, and bass before joining BanG Dream! — the group’s start did turn out a little rocky. However, their bonds and harmony as a band had definitely strengthened over the past three years together.

She also pointed to both the Girls Band Party game and their YouTube videos as factors in their international growth, with their “live viewing” concerts getting some overseas attention as well. The members do try their best when it comes to English fan interactions but, as Nishimoto expected, “music has no language barriers.”

When not at the studio, she spends her time building up her own YouTube channel. These are all content that she films and edits by herself, and are all part of her larger online presence — Nishimoto runs an active Twitter account and blog, too. While the videos don’t have a fixed format, they typically cover the same topics fans know her for. One video she’s playing her bass guitar, and in another she’s challenging herself in Girls Band Party. Sometimes it’s as simple as doing a chocolate review (likewise, her character is obsessed with chocolate cornets). It’s been a life-changing journey, so she’ll continue to deliver on fan requests if she’s able to.

Thank you so much for coming today!
See you in Japan Park Singapore！ pic.twitter.com/HstPiLnAk9

Catch Poppin’Party! live on Sunday, 5 August at Japan Park Singapore’s Omakase Stage. Nishimoto says they’ve already prepared the set-list, one that promises to liven up the event for both the young and old. All attendees are welcome to view the concert, though fans who spring for a S$68 VIP ticket gain access to reserved front-seating. The band will also have a talk show the day before, on 4 August.

Ade thinks there's nothing quite like a good game and a snug headcrab. He grew up with HIDEO KOJIMA's Metal Gear Solid, lives for RPGs, and is waiting for light guns to make their comeback.
Previous post Sample all 47 prefectures at Japan Park Singapore this August
Next post Hyperplay set to light up the Singapore Indoor Stadium with esports and music