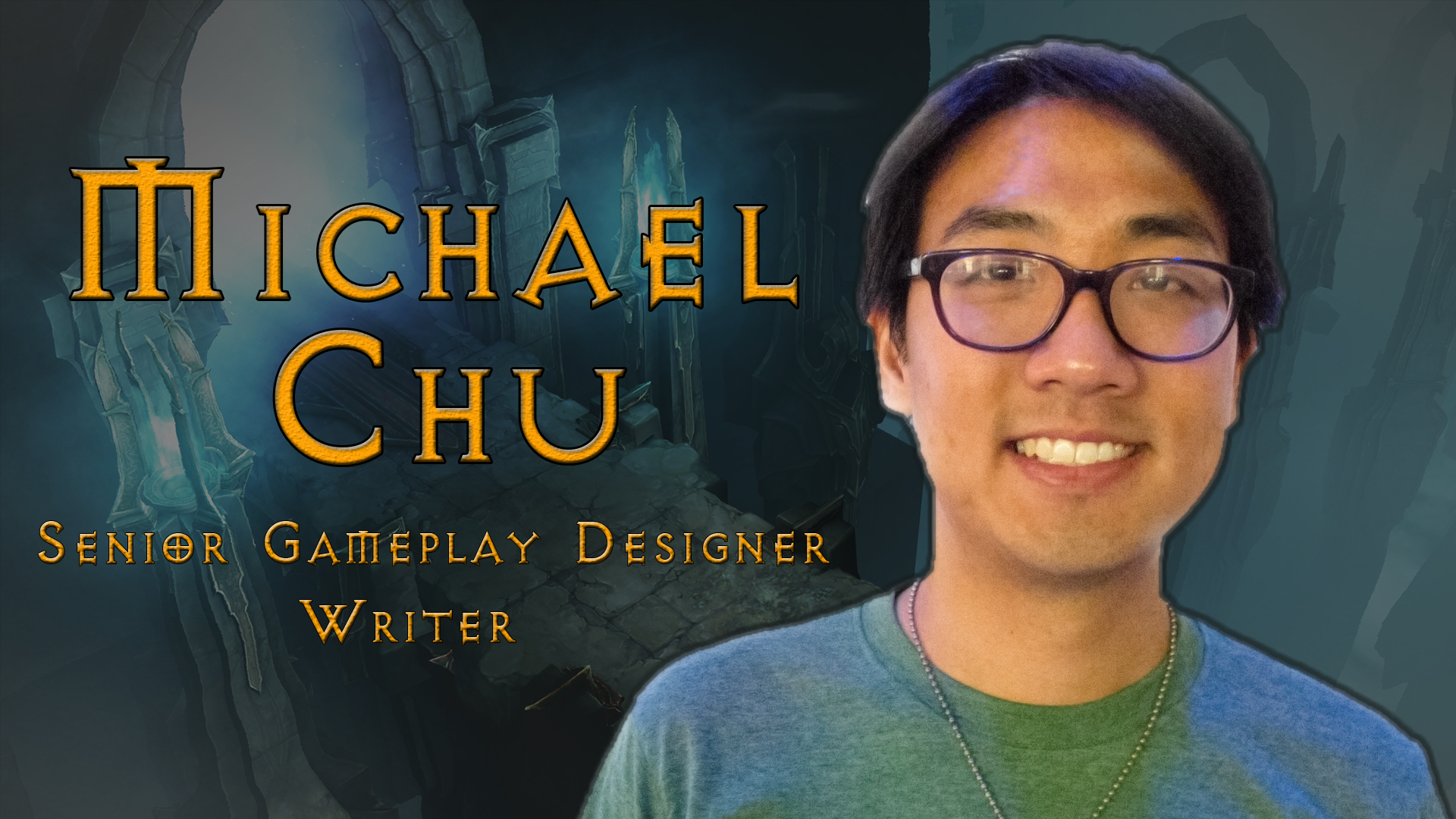 Despite his involvement with angels and demons, Michael’s elemental resistance proved futile for his first impressions of the country: the humidity, even at 3AM, was brutal. Luckily he’s a big foodie, quickly falling in love with the selection of cheap and good food. Of course, meeting the fans was a highlight too, distributing his signature and answering questions. With his constitution restored and his spirit kept high, we eventually found an opportunity to prod Michael with a few questions of our own.

GameAxis: Can you tell us what it is you do at Blizzard?

The Diablo series has been known for its variety of characters. Why did Blizzard choose to go with the Crusader?

I think there’s a lot of reasons. One of them is that when we started working on Reaper of Souls, we wanted to see [what’s a new class] everyone wants to do. Obviously there’s lots of ideas but – it’s something that comes up a lot – there’s this tradition of that classic knight character. We had one in D2, the Paladin, right? Very popular with Blessed Hammer and all that.

But we didn’t want to just do the Paladin again. We wanted to put a little twist on it so what we did was come up with this idea for the Crusader, who’s more intense and grim. He’s still a holy warrior but he’s also just got this sort of edge to it, and that’s where the idea came from.

How did development for the Crusader go?

Well everything that Blizzard does is very iterative. So we have a basic idea and then we start making skills for it, then we see how those skills play. Edit. Iterate. Go from there.

As far as the story goes we had this idea of what we wanted the personality and those attributes to be, then we sort of decided how to come up with the backstory.

So what about Malthael? Why the Angel of Death instead of something else?

One of our goals in Reaper of Souls was to recapture that very core feeling of what [the Diablo games] are, which is this dark, gothic horror. And so because of that we’ve been thinking of bad guys. We’ve done a lot of demons already and you fight Diablo a lot, so do you really want to fight Diablo again? And we’ve just defeated the Prime Evils so it’s hard to top that.

Then we had this idea: ‘Oh, Angel of Death.’ Now that fits all of those dark, gothic, medieval [themes] and its new. It’s a combination of all of that. Also, Malthael is this character that has a very interesting backstory so it just was a good fit.

What was it like working on Reaper of Souls? Was it more of a reaction to the reception of Diablo III or just what you guys wanted to do?

Well we always knew we wanted to do more.  For Diablo III we sort of opened the door and now we want to see what else there is. We definitely knew that we would want to look at how Diablo III worked out and see things we wanted to add to it to make it a full, experience. That’s what the role of the expansion pack is.

Now that it’s out the door, what’s next for the Diablo team? Can we expect an Act VI?

Oh, well right now our focus obviously is support for Reaper of Souls because we want to look at feedback and see how the things that we’ve made are working out. We’re very committed to supporting our products at Blizzard, right? When a game comes out it’s definitely not done – we’re gonna’ do patches, post-launch patches and basically maintain the game. That’s basically what the team’s focused on at the moment.

What are your thoughts on PvP in Diablo so far? Are there any plans to work more on that?

It’s definitely something that comes up a lot. We rarely have a meeting where someone doesn’t bring up the subject of PvP so I’d say it’s something of interest to the team, but we don’t really have any concrete announcements or anything like that.

Do you have any say in Heroes of the Storm?

No I’m not involved at all. I’m excited that there are some Diablo characters in there, though.

Lastly, a fluff question: If you could be any character in the Diablo universe, who would you pick?

There’s a lot of good options for that, right? I could be like Zoltun Kulle and never die but, you know, the two characters who I think have the most fun in the universe would be [Lyndon] the Scoundrel or Covetous Shen. I’d just hang out, eat food all the time, have all these adventures. I think Shen would do pretty well in Singapore!

As we wrapped things up I casually brought up the topic of Carbot Animations’ then-latest video, as I was wondering if Michael had the time to watch it. Turns out he did and was just as a surprised as the rest of us.

Here’s the original cinematic for comparison.

Diablo III: Reaper of Souls is on sale now. Look out for our review on it, coming soon!

Ade thinks there's nothing quite like a good game and a snug headcrab. He grew up with HIDEO KOJIMA's Metal Gear Solid, lives for RPGs, and is waiting for light guns to make their comeback.
Previous post Run An Empire Makes You Physically Work For Territory
Next post Hearthstone Now on iPad, Reaches Southeast Asia Next Week