Home / Features / Xbox One: Games Will Carry It Through

Xbox One: Games Will Carry It Through 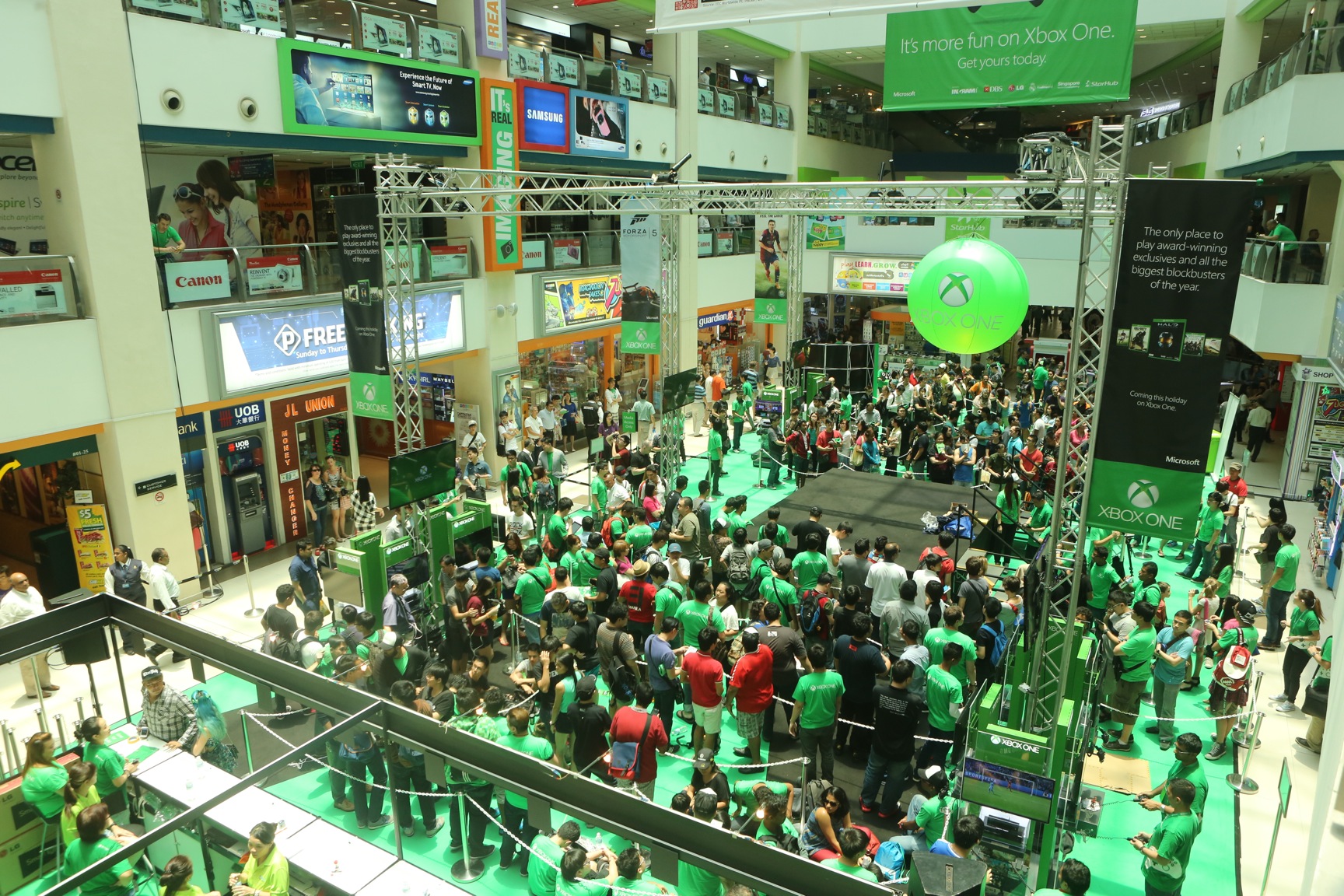 Today is the Xbox One’s second month birthday. In Singapore, that is. Globally, it’s already been a year since Microsoft graced us with its latest console, and haven’t we all had a lot of fun with it? Sure, Microsoft may have broken a few hearts and a few promises, but isn’t that part of their charm? Today let’s relive that first year, and look at what did and didn’t go wrong.

The First Day
We have previously talked about Microsoft’s ‘leadership’ actions taken with the original Xbox and Xbox 360, and it’s here then that we see again that the company let slip a golden opportunity to take one up against the PlayStation. While in truth it was unsurprising to see Microsoft match Sony’s PlayStation 4 pricing at S$639 for the Xbox One, many in the industry agreed that even a small price difference would have sent a much bigger jolt to the install base numbers. Would Microsoft have been able to afford a price-cut in Singapore, even if it’s just for the holiday season? The limited-time promotional of US$349 (US$50 off the SRP) in the US seems to tell us a BIG yes. Perhaps Microsoft felt that reducing the console price so close to its launch would not go down well with Day One owners.

This however, could lead to the next conundrum. Many gamers who might have considered purchasing both consoles (after all, this is what you need to do if you want to play all exclusives for the next seven years) were likely put off by the huge financial investment this would have required. For most people it was a question of one or the other, and why buy the least value (Sony’s got the more aggressive bundles this holiday too), perceived less powerful (resolutiongate comes to mind), and more cumbersome system?

New Year’s Resolution
As we moved closer into 2015 the main problem with the Xbox One perhaps became clear. It wasn’t simply that the console was less powerful than Sony’s system, but rather that because they are otherwise so similar this is a prevalent issue.

One of the most popular topics of discussion has been the difference in resolution that the two consoles support for multi platform games. In general the PlayStation 4 has been able to run full 1080p, whilst the Xbox One has to settle for 900p or even 720p. Imagine the horror. Of course this should have been a smaller issue that it was made out to be, it’s got nothing to do with the actual gameplay, and let’s not forget that many of the nicest looking games from the last generation (Halo 4 and The Last of Us) ran at 720p. The problem is that when we’re talking about the same games, and on consoles that both function in pretty much identical ways in every other area, it becomes a point of notable difference.

If we look back on previous console generations we can see systems that were drastically different. Sure, the Nintendo 64 could produce nicer looking 3D graphics than the SEGA Saturn, but the Saturn had a separate processor to render 2D. It also had a 6-button pad, so if what you were actually looking for was a system to play 2D arcade fighting games then it was in that regard technically superior. The PS3 was more ‘powerful’ than the Xbox 360, but only when developers really understood how to get the most out of its cell architecture. The Blu-ray discs also had more storage space, which could also be used to create a more impressive game under certain circumstances.

Yet we were never really arguing about this stuff. Like how no one turned around and said ‘Hey, the Wii only runs at 480p so why would you get Nintendo’s system when Modern Warfare 3 looks like utter garbage on it?”

The point is simple; the Xbox One and PS4 are more similar than any two previous rival systems. The architecture is nearly identical, as are the services they offer. PlayStation Network, Xbox Live, PlayStation Plus, Games With Gold, PlayStation Camera, Kinect. These are different names for the same thing. Of course it should be about the games; most of these are the same. This is why being the slightly less powerful console is a problem.

Kinect Adventures
The North America and Europe markets got a price drop and may have been a blow for early Xbox One adopters, but it was an undeniably smart and sensible move for the long term future of the console. This sweet deal was facilitated by the removal of the bundled Kinect, and whilst this was another step backtracked from Microsoft’s original vision for the console, it not only allowed for a competitive price, but opened up extra power that had been reserved for the camera by the OS.

Personally, I was a little frustrated that I’d payed extra for an accessory I never really wanted, and now one that wouldn’t be integrated in the way that had originally been promised. Of course the idea had been for every single Xbox One owner to also own a Kinect, encouraging developers to integrate features for it into their games without fear that it would limit their market. Now this isn’t the case, and its most useful function will forever be its ability to scan download codes.

But a move away from Kinect will always be a move in the right direction. Sure, the original amassed huge sales figures, but we’re talking about people who bought it thinking they could use it to dance themselves thin (or whatever). For gamers it was always a bad thing. Since its launch in 2010 Microsoft essentially stopped releasing exclusive games that weren’t Kinect based outside of several core franchises. We got Halo, Forza, Gears of War and Fable, and that was it. Every other resource went to Kinect. Rare, the masterminds behind Perfect Dark, Donkey Kong County and Goldeneye, made Kinect Sports. Star Wars, exclusive to Xbox, excited? Surprise! It’s a terrible Kinect game. Meanwhile Sony’s console saw innovative exclusives such as Beyond: Two Souls, Ni No Kuni, Journey, Puppeteer and The Last of Us, on top of installations in core series like Infamous, Little Big Planet, God of War and Uncharted.

The Battle Begins
The real irony of all this is that in the last couple of months the gap between the two consoles has narrowed to such an extent that it really doesn’t matter which system you own/want/sleep with in your bed at night. As the underdog, this has been good news for Microsoft. Gradual updates to the OS have slowly helped improve the systems interface and functionality (this is also exactly what happened with the Xbox 360) but it’s been the recent influx in great games that has really made it a console worth owning.

Sunset Overdrive in particular is one of the most enjoyable games I’ve played in a long time, and alongside Forza Horizon 2 and Halo: The Master Chief Collection, which are particularly great entries in two of Microsoft’s most loved franchises, you have three awesome exclusives that sit nicely alongside the usual array of multi-platform titles released this time of year. Not only that, but games like Assassin’s Creed Unity and Grand Theft Auto V are running at the same spec on both systems, so the resolution argument doesn’t even apply for these titles. Meanwhile the PS4 may still look prettier, but this years exclusives; Drive Club and Little Big Planet 3, have largely been disappointments.

Of course Sony has some great titles on the horizon, and with more first party studios than Microsoft we’re likely to see a greater diversity of exclusive games in the future. Having said that there’s still Rise of the Tomb Raider and Halo 5 to look forward to on Xbox. The battle between the consoles might not quite be SEGA vs Nintendo, but it is a close one, and it’s closer than it was this time last year.

(With contributions from Aaron Yip)

Aaron Yip is an industry veteran with more than 15 years of experience. When not spending time on his gaming PC and consoles, he can be found in Hyrule solving ungodly puzzles and collecting gems.
Previous post Dragon Age’s Witch of the Wilds Now a Collectible Statue
Next post Three-Day Open Beta for Ubisoft’s The Crew This Week