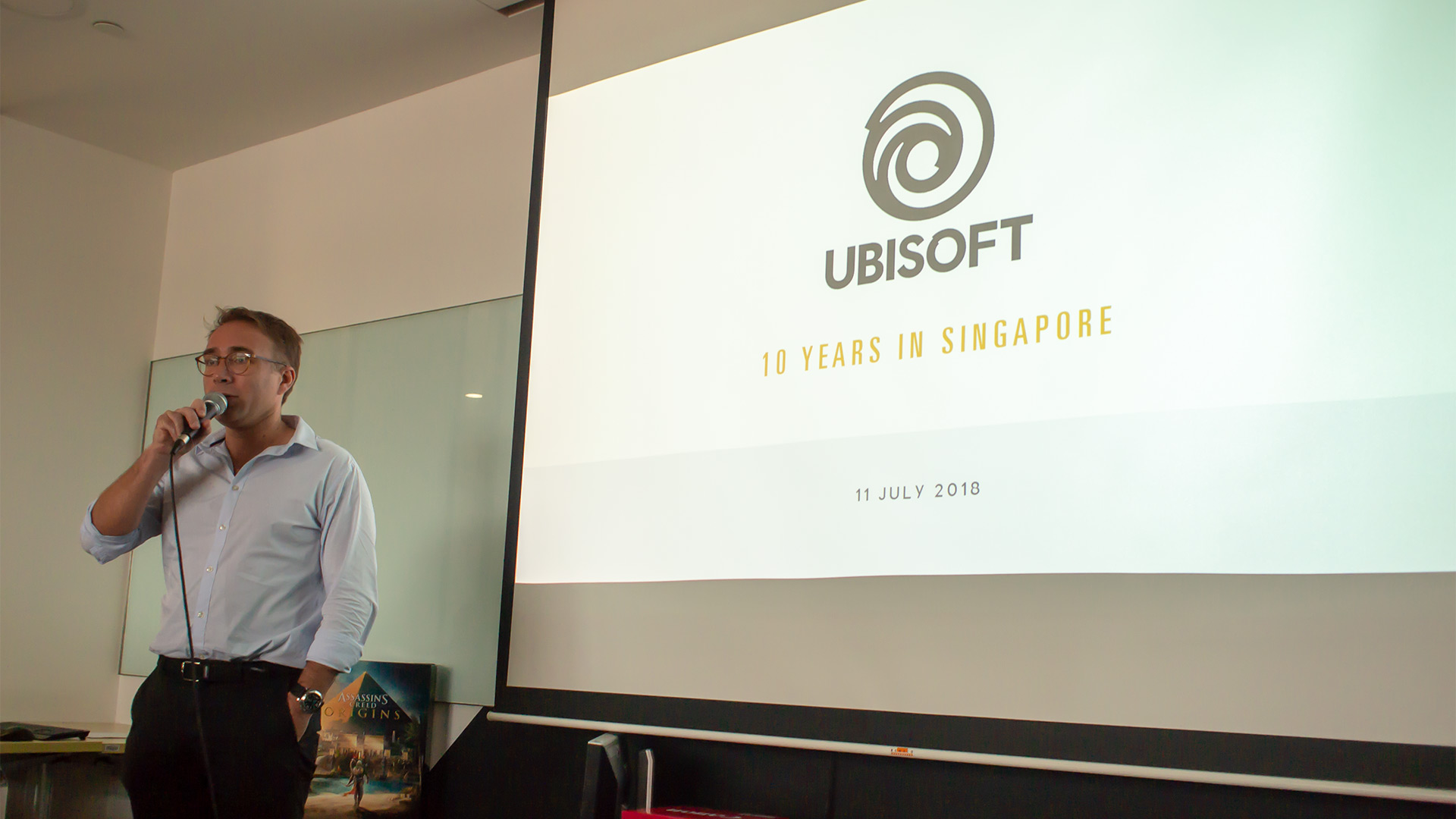 In July 2008, Ubisoft planted its flag on the tropical city-state of Singapore. It wasn’t the first major video game publisher to do so, but it was one of the few to open a development studio. Exciting as it was, Ubisoft Singapore faced the enormous task of paving and building the regional game development scene, of proving to schools, parents, and prospective employees that there was a career to be had here. Ten years later, they’re working on an original title that has gamers around the world chomping at the bit.

“At that time, it felt a bit like a crazy bet,” said former managing director Olivier de Rotalier. He was addressing a group of invited media for Ubisoft Singapore’s 10th anniversary, part of a day spent at their One-North premises for a tour, hands-on demos, and interviews.

“I still remember, it was in Fusionopolis, and I’m here with someone who’s telling me that it’ll never be possible to build up a gaming industry in Singapore. For many reasons — for talent pool or creativity reasons, because the industry was already late, et cetera.

“It’s true, we really had this challenge of starting from scratch and catching up with the rest of the world. But now, ten years after, I think we can be proud of what we achieved.”

In Olivier’s time, Ubisoft Singapore scored credits on 12 Ubisoft titles, with another two in the oven. That journey began with a Teenage Mutant Ninja Turtles arcade game remake, Turtles in Time Re-Shelled, mimicking the route that the now-defunct LucasArts Singapore took with the Monkey Island series. Unfortunately, the game didn’t fare too well and, thanks to an expired license, is no longer available. There were only 22 staff members then. That next year the studio grew 400% in size as they took on Ubisoft’s vision of turning Assassin’s Creed into the next big franchise. With help from some of the original developers, they crafted 10 linear levels for Assassin’s Creed II. That instilled confidence in both the higher-ups and the team to do more, with their big break ultimately coming in the form of the series’ water and naval combat technology. While they did develop larger areas and zones over time, with staff numbers continuing to grow, the studio had pretty much minted themselves as masters of the sea.

Some may remember Ghost Recon Phantoms (formerly Ghost Recon Online), a multiplayer free-to-play tactical shooter than ran from 2012 to 2016. That was another Singapore studio project, offering a different take on the Tom Clancy franchise and, in all likelihood, provided valuable data for Rainbow Six Siege.

Today, Ubisoft Singapore is home to more than 300 people from the region and beyond, a diverse pool made up of 32 different nationalities. They continue to be the premier stop for game-dev graduates in Singapore and are concurrently working on two titles: Assassin’s Creed Odyssey in a support role, and Skull & Bones as the lead studio.

Olivier says that their work wouldn’t have been possible without the help of Singapore’s government agencies such as the IMDA and WSG, or their long-running partnerships with schools such as DigiPen Singapore and the local polytechnics.

“It’s been an amazing ten years and I’m sure we’re in a very good position to have an even better ten years [to come.] I was very lucky to drive this from the beginning.”

The anniversary also marks his departure from the studio, as Olivier returns to France to work on “a very exciting project” for Ubisoft.

Taking over the ship (that same day, no less) is Hugues Ricour, who doubles as the managing director for the recently opened Ubisoft Philippines. In a separate interview, he says that, historically, the Singapore studio has been one about pioneering.

“We’ve pioneered in creating breakthrough naval battles and the ocean technology, we’ve pioneered by deciding to come to Southeast Asia and believing in the talent here … Gaming is extremely technical, so we need to stay on the edge. We will continue to focus on the AAA high-end spectrum, and we need to define our new story year-after-year.

With growth comes change, and as someone who’s been with Ubisoft Singapore since 2009, Hugues said that the studio’s dynamics are now different. With several teams and multiple locations – “we have two towers, two floors” – they aren’t as young and as close-knit as the early days, though they still try to remain agile as a team.

“Of course, now it’s a bit difficult to hold a party at someone’s place, but that might be good idea for the next one,” he jokes.

“I guess we became more professional and structured, but we need to continuously cherish what is in our roots, which is people development and being serious about fun. Yes, it’s serious because gaming is a huge multi-million entertainment industry and our budgets are always on the rise. That said, we’re here to create entertainment, and we need to be fun and be teams that understand and can challenge each other.”

Which begs the question: what does a company in the business of fun, do for fun?

“(Laughs) Jessie here from the communications team has a ton of ideas, but I can give a few examples. We have clubs where groups of people go running, they go travel in the region, I think there’s a beer club – basically to share your passion as a group of people and connect with each other.

“Another great initiative here, since we have so many nationalities, are the monthly sessions where we share about one country. So we share about the culture, the food, specifics such as what is socially accepted or funny. The politics, the economics, why someone from Russia or Canada is in Ubisoft Singapore. That has really resonated well to connect people, and we have lots more events going on.

“You know that work-life balance we hear about… It’s a competitive industry, so we need these moments of relief. We need to celebrate when we ship a game, to breathe when Christmas or Chinese New Year is here.

“So if you want to join the crew, come to the next Christmas party! (Laughter) Make sure to apply and get a job. We’re always on the look for programmers and other top talent in the industry.”

Ade thinks there's nothing quite like a good game and a snug headcrab. He grew up with HIDEO KOJIMA's Metal Gear Solid, lives for RPGs, and is waiting for light guns to make their comeback.
Previous post Huawei’s GPU Turbo to improve mobile gaming experience
Next post UbiSG 10th: Skull & Bones hands-on and interview with creative director Justin Farren