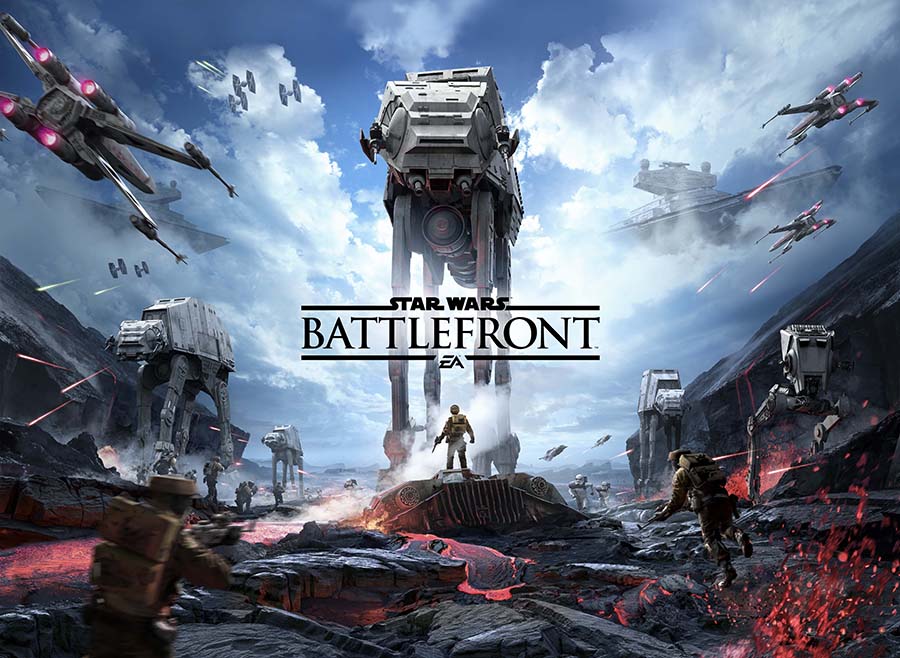 Star Wars mania is reaching fever pitch. Though December 17 is just mere weeks away, it feels as though time has slowed to a slow, tedious crawl. Fortunately, to tide us fans over the next few weeks is a brand new Star Wars game.

I am of course referring to Star Wars: Battlefront. The game looks set to be one of the blockbuster first-person shooter this holiday season and I recently had the chance to play the final retail version just hours before its official launch in Hong Kong. But more than that, I also had the chance to speak to Danial Rashidi, a technical artist at DICE who worked on Star Wars: Battlefront to learn more about the philosophy behind the game and how the team at DICE went about designing the game.

1. It was created by fans for fans
It goes without saying that Star Wars is one of the biggest movie franchises and that there are a great number of fans. Many of these fans happen to work at DICE and also on Star Wars: Battlefront. Danial himself is a great fan of Star Wars and shared with me that many of his colleagues were too. In fact, he told me that there was mass hysteria at the DICE offices once it was announced that they were teaming up with Disney and LucasFilm to work on a new Star Wars game.

The team was also painfully aware that they would be scrutinized by Star Wars fans around the world for whatever they do, and would be mindful of this in the course of their work. Though they wanted to make Star Wars: Battlefront their own game, they were also careful not to introduce elements that would alienate fans.

To do this, the team went to great lengths to ensure the game felt authentic. For the designers, they went to the actual film locations in Tunisia and Iceland to get a feel of the places themselves, and also to capture footage to use in the game.

Another example is the way sound designers working on Star Wars: Battlefront recorded audio samples for the game. DICE audio director Ben Minto and sound designer David Jegutidse explained that they had used original techniques from the movies to record sound effects for the game, and that meant using organic sources – nothing synthetic or digital – because that was the way audio for the original movies were recorded. Minto himself spent days recording wire fences around Iceland, which would later be used as the soundtrack for the planet Sullust.

2. It feels like you are in a Star Wars movie.
The main reason why any Star Wars fan should play Battlefront is because it makes you feel as though as you were in the movie. The sights and sounds all seem so familiar. You’ll see familiar ships and vehicles including X-Wings and TIE fighters, AT-STs and AT-ATs; and you’ll also hear the familiar sounds of blasters firing and lightsabers crackling; and also familiar characters including Luke Skywalker, Princess Leia, and of course, Darth Vader.

The Supremacy game mode, in particular, is worth the admission price of the game alone. In this game mode, Rebel and Empire forces are thrown onto a battlefield to fight over control points, with the aim of gaining control of all five or the majority of them in a 10-minute round.

What makes this so intense is that it is all-action right from the get-go and unlike the other modes, Supremacy will see battles taking place using ground troops, vehicles and even Heroes and Villains – Battlefront-speak for superhero characters like Darth Vader and Luke Skywalker. The scenes that unfold are awesome and gripping, and is so realistic that it feels like you are part of a battle taking place in a Star Wars movie.

But game modes aside, it is the sheer attention to detail that really completes the experience. Remember I mentioned about how the team went to the actual filming locations and how they used the same sound recording techniques? Those are integral to recreating the Star Wars experience.

Every map is distinct in its appearance, topography and feel, and looks like it came straight out from the movies. Which is partly true because the team went to the exact same place where Star Wars was filmed to get their inspiration. Likewise for the sounds, that’s because the team again used the same techniques to record sounds for the game. It is this respect for the original movies that makes Star Wars: Battlefront such a thoroughly authentic Star Wars experience.

3. It’s fun.
Lastly, play Star Wars: Battlefront because it is fun. Though the lack of a story-based campaign mode, is quite disappointing, Battlefront makes up for that somewhat with its sheer number of multiplayer modes. There are a whopping nine in total and all of them are distinct in their gameplay and feel, so there’s bound to be something for everyone.

Like I mentioned earlier, I really loved Supremacy, but Walker Assault is really great too. In this mode, players acting as the Empire are slowly marching towards a Rebel base in their fearsome AT-ATs, while Rebels must protect their base by capturing uplink stations so that they can receive help from their Y-Wing fighters. Like Supremacy, gameplay in Walker Assault is relentless, but most of all, it manages to recreate scenes that we love from Star Wars.

Another mode worthy of mention is Heroes vs. Villains. In it, players are divided into two teams being led by heroes of their respective faction. If you are playing as the Rebels, you will be led by Luke Skywalker, Princess Leia and Han Solo; for the Empire, you have Darth Vader, The Emperor and Boba Fett. The goal here is to kill the hero units on other side, and the best part is that players will take turns playing as these iconic characters and get to use their signature moves. For Vader, take means Force Choke, while Luke gets to show off his mastery of the Force with Force Push. And if you are the Emperor, have fun raining down Force Lightning on your helpless foes! It’s massive fun.

But if your fighting talents lie in the skies, fret not because there’s Fighter Squadron, a mode which lets you take to the skies and duke it out with your friends and enemies in TIE fighters, X-Wings and even the Millennium Falcon.

Aaron Yip is an industry veteran with more than 15 years of experience. When not spending time on his gaming PC and consoles, he can be found in Hyrule solving ungodly puzzles and collecting gems.
Previous post Sony’s PlayStation VR Shows Promising Future
Next post Giveaway: Heroes of the Storm Cho’Gall Codes