This Week on PSN Asia (14/10): The Evil Within, Borderlands: The Pre-Sequel & Sleeping Dogs Definitive Edition 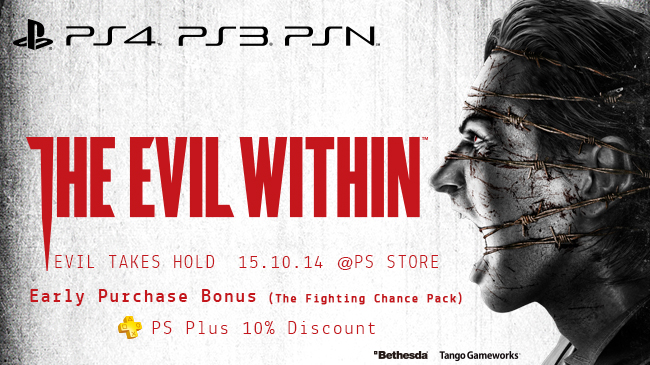 This week’s latest on the PlayStation Network Asia is all about an all-new horror IP, a sequel of a sequel, and a remastered edition. Of course I’m talking about The Evil Within, Borderlands: The Pre-Sequel and Sleeping Dogs Definitive Edition.

If you like Survival Horror game, The Evil Within (S$74.90) would be the big great horrifying one coming to the PS Store on 15th October for both the PS4 and PS3. You can enjoy an early purchase bonus, an aptly-named “The Fighting Chance Pack” add-on if you download the game on or before 28th October. Furthermore, PlayStation Plus members can enjoy an extra 10% discount off the price!

If a survival horror game isn’t your cup of tea (don’t worry, it ain’t mine either – no guts, lah), Then perhaps you can check out Borderlands: The Pre-Sequel. Set in between the original Borderlands and Borderlands 2, The Pre-Sequel cost S$74.80 on the store, and allows you to play as one of four all-new characters. The game’s Season Pass (S$37.40) will also gives you 4 DLCs that includes more new characters and new missions. Watch out for our review of the game soon.

Last but not least, if you purchase the game between the period of 15th to 28th October, you’ll also get the bonus DLC “Shock Drop Slaughter Pit”, which allows you to enter the Shock Drop Slaughter Pit and face off against the toughest Scavs on Pandora’s moon. If you’ve already played the previous 2 Borderlands, you can’t miss this one..

And if you have not played one of the most enjoyable open-world game on the PS3 in 2012, Sleeping Dogs, now’s a good time as any to play the Definitive Edition on the PS4. Available on the PS Store today at S$60.90, all of the available DLCs will be included as well – including the well received “Year of the Snake” and the horror-themed “Nightmare in North Point” add-ons.

Aaron Yip is an industry veteran with more than 15 years of experience. When not spending time on his gaming PC and consoles, he can be found in Hyrule solving ungodly puzzles and collecting gems.
Previous post House of Heroes Makes Its Way to Singapore and Malaysia
Next post The Order 1886 Interview: Creative Director Ru Weerasuriya