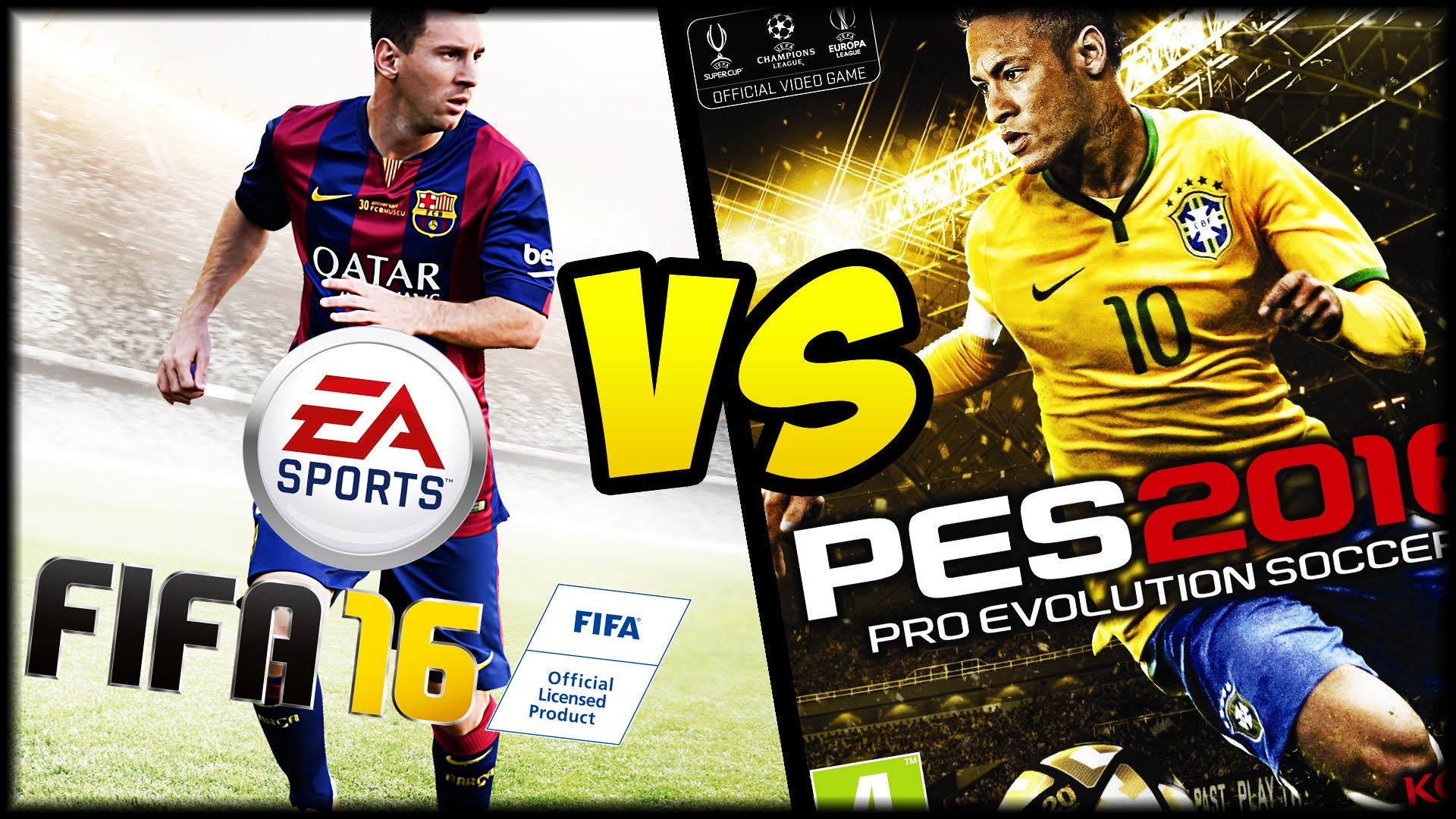 In the world of video games based on the beautiful game, there have only ever been two names to consider: EA’s FIFA and Konami’s PES (Pro Evolution Soccer) or Winning Eleven as it was known back in the day. While PES was the undisputed king in the early 00’s, a lack of innovation and sub-par marketing meant that FIFA has since become the undisputed king of the football sim, outselling its Japanese-developed rival many times over.

With its latest iteration however, PES, now sporting an updated roster, innovative gameplay and more importantly, the same FOX Engine that also powered Metal Gear Solid V: The Phantom Pain, is gearing up to give the reigning king a good fight. FIFA has been on top for a long time and perhaps has started to rest on its laurels a bit, relying on the strength of its brand name and the licenses it commands to pump the millions it earns every year into EA’s burgeoning coffers.

Will this be the year of the Japanese upstart or will FIFA again show everyone why it has been the dominant football experience for the modern gamer? Let’s find out.

In a game about a game, gameplay must be king! FIFA and PES take very different approaches to how the game is played.

Think of PES 16 as Arsenal during the Invincibles run of the 03/04 season (showing my age here); fast, exciting and more focused on putting balls into the net rather than stopping them from going in. The sloppiness of past PES’s seems to have been corrected in the latest iteration, and the new game is all about offense, offense, offense. Passing is razor smooth, players feel agile and the ball moves at a speed that mimics the real game a lot better than its predecessors. Defenders and goalkeepers are also not the gods like they are in FIFA, often making real-life mistakes and being punished for it.

Konami has also managed to get the flow of the beautiful game right this time; and linking a chain of attacking play from the goalkeeper to midfield and then to your strikers are more fluid than ever before. The game does all this without any loss of momentum.

If PES 16 is like the Arsenal of the 03/04 season, then FIFA 16 is like the Chelsea team of the 09/10 season under Carlo Ancelotti. The game is slower, more deliberate and less about style and more about grinding out results. The core gameplay of FIFA 16 plays like FIFA 14 and 15 and pretty much every FIFA from the past half-decade.

This isn’t necessary a bad thing but all the awesome new features such as the trainer mode, smarter defense AI and the new off the ball trick system is buried under gameplay quirks that make the game feel unexpectedly last generation.

For players who like that, you will feel right at home with FIFA 16. Passing in the game feels solid, the legendary midfield battles are still as intense and ever and the AI is still the smart defensive AI. So scoring in the game meant that you would still need to have sensitive shooting controls and clever positioning. It isn’t easy to execute but the feeling of satisfaction is instantly gratifying when you do.

However, in the course of playing FIFA 16 I couldn’t help but wish that it played more like PES 16.

For these reasons, the winner of this round is PES 16.

In its notably bigger PES 16 marketing campaign, Konami shouted to the high heavens that the tech powering PES 16 was its in-house FOX Engine. This is the same tech that powers Konami’s other blockbuster 2015 title, the fantastic looking Metal Gear Solid V: The Phantom Pain.

Well, so does it make Messi and co. look as awesome as Big Boss? No, it really doesn’t.

The FOX engine may be great for rendering open-world landscapes, guns and epic facial hairs but perhaps isn’t the best at rendering the sheer amount of faces and moving body parts that a football stadium consists of. Facial textures are drab; eyes look dead and something about those chins scare me. As for the stadiums, well, they look slightly better than the players but not by much.

Since you stay zoomed out for most of the game, these quirks are not so apparent but still, when Neymar stares at me like Shrek, I do shiver.

FIFA 16 is still running on the Ignite engine, which while a bit dated, still produces some lovely visuals, far above what PES is capable of churning out.

Special mention should be made for the way players move in FIFA 16 with EA giving each player a unique animation that reflects their gait. Players move the way you would expect them to depending on their physical size; taller players take longer strides while stockier one keep their center of gravity low when making quick dashes.

Combine this with the large variety of true to life locales in FIFA 16 you can see why EA still makes the best looking football sim.

FIFA 16 takes this round with relative ease.

A lot of the charm of PES in years past was how creative the game got with team names and locations since on the licensing front, Konami’s offering generally suffers. With no licensing access to the Premier League or the Bundesliga and the teams and properties that come with it, PES seems like a far less realistic offering.

You have teams like North London (Arsenal) or Man Blue (Manchester City) with similar looking jerseys but I can’t help but feel as if I was playing a sort of knock-off soccer sim.

There is however a work around, especially on the PlayStation 4 version. You see, you can download player-made badges, jerseys and other paraphernalia. In about an hour, you can create the Premier League, the Bundesliga, and pretty much any other European league that you want. It is not a perfect solution but it does work surprisingly well.

On the plus point, with PES 2016, you do get access to regional UEFA competitions like the Champions and Europa Leagues.

Try as it might though, there is little Konami can do in the face of EA’s exclusive tie-in with FIFA. FIFA 16 has all the licenses, all the stadiums and all the players the football aficionado wants. From Italy to Brazil, America to Brazil, the sheer amount of licensed content available in FIFA 16 is truly mind-boggling.

There is little else to say, if you want the most up to date players lists and the access to real-world teams, then FIFA is still king.

The heart and soul of the single player experience of a football sim is its career mode, where you take control of a team and using your skills and reflexes to bring them to glory. With PES 16, Konami has created probably the best single-player experience ever in the form of its Master League.

It combines the depth of an RTS with the flexibility of an RPG all wrapped into an engaging football sim. PES 16 sees you taking control of a team and navigating them through the trials and tribulations of a football season complete with transfer woes and the like. You get bonuses for signing star players and nurturing youth talent, giving you a real sense of being invested.

Along with Master League, PES 16 also has myClub that is its equivalent of FIFA’s Ultimate Team. It’s quite frankly, the weakest of the game’s modes and doesn’t come with the same depth as FIFA 16’s offering.

Online play is now incredibly competent and fun to play in. With FIFA, you don’t get anything as refreshing as Master League. Instead, you get the same career mode that you have had in FIFA’s pasts and veteran players will likely find it tiresome with its lack of notable gameplay innovation. The management elements felt tacked on and not as tightly integrated as PES’s offering either.

Ultimate Team has always been a confusing addition to the FIFA series. To players who like it, it may seem fun but to the majority of FIFA players, the card-based game mode seems like a massive, micro transaction heavy money grab. Again, you can give it a go but you won’t lose any core gameplay if you give it a miss.

Then there’s the addition of Woman’s Football. This was a chance for EA to really give the fairer sex the equal representation they deserve. Instead, the mode is buried beneath menus and you only have access to 12 teams and one competition. It’s a half-baked mode with the only bright spot coming in that the way women control is a lot different from their male counterparts. They are faster, more agile and turn quicker, thus making for a far more PES like game experience. The irony.

PES makes a comeback, winning this round!

PES is fun; there is no other way to describe it. The gameplay is razor-sharp, and the way the ball moves across the field feels like it would in a real kick-about. There’s a great feeling that this game gives you, almost a high as you make that perfect play at a breakneck pace, dismantling your opponent’s defense with a quickly timed through ball or a smart lob right to a waiting striker.

Quite simply, the speeded up pace of the game allows for this. Goals do not come in trickles in PES; they come in a torrent of cheers, yells and joy. It really is a testament to the well-designed gameplay of PES that you can sit there with a stupid grin plastered on your face for hours and not realizes this.

FIFA 16 is also fun, make no doubts about it but the simple fact remains; this is pretty much the same game as last year while PES 16 feels like a whole new game over its predecessor. The game is slower, more meticulous and rewards careful planning and grit as opposed to quick reflexes and fancy footwork.

However, the simple fact was that when I was playing FIFA 16 I kept wishing it felt more like PES. EA’s offering is just simply too slow, goals are too difficult to score and defensive play is too easy, usually ending a beautiful series of offensive plays with a single tackle.

It’s disheartening. PES takes this round in extra time!

Well, ladies and gents, it would seem that this old dog really does have a few tricks left in him as PES pips FIFA by the narrowest margins to claim the title of the best football sim of the year.

Sublime gameplay combined with updated gaming sensibilities helped PES 16 while EA seemed to be resting on its laurels and delivered a small incremental update as compared to the total re-imagining that PES 16 was.

The King is dead. Long live the King.

Both PES 16 and FIFA 16 were tested using the PlayStation 4 version of each game. Digital copies of the games were provided to us by Sony Computer Entertainment Hong Kong.