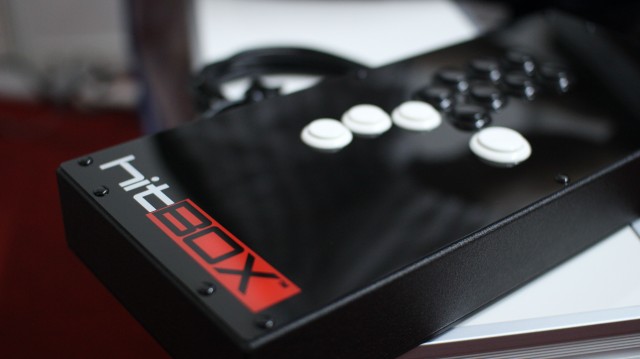 That’s right, the Hitbox arcade stick has no stick.

A joystick is defined by the ‘stick’ in its name. It has a stick, and therefore it is called one.

The Hitbox stick, however, is better classified as a box. But boy, what a box it is.

Painstakingly handmade in the garage of founder and creator Dustin Hoffer, the Hitbox is an arcade stick that utilises directional buttons in place of the standard joystick.

“We made it with all fighters in mind,” Dustin told me us as we checked the stick/box out at the Tokyo Game Show. Word on the street has it that the Hitbox may be better suited for 3D fighters, but we have to agree with Dustin here: it could add the same ease of use to all.

“Hand-eye coordination with your fingers is faster than with a joystick,” Dustin explained. He also added that the Hitbox is designed to be ergonomic, perfect for those long nights of button mashing. Instead of making use of just your wrist to turn directions, the Hitbox forces the use of your entire hand. This is less strenuous on the wrists tendons in the long run. Hitbox LLC is, by the way, a two man operation. Dustin runs it with his brother.

The first Hitbox was made in the Hoffers’ garage just two years ago. Since then, several thousand units have hit the American fighting game community. The Hitbox is available in the Ps3 version (US$160) and the Xbox/Ps3 hybrid version (US$225). There are no plans to create a standalone Xbox 360 fight stick right now. International shipping is available, for you Southeast Asian fgc-ers, at just US$60.

Expect some stares, however. Swapping over after years of clutching your own stick is going to be difficult, and some people are just never going to get used to the fact that you’re beating them with a box.

“The Hitbox is still new, and some people are still afraid to try it,” Dustin said.

But fortune favours the bold, so stay tuned for our review of the Hitbox, exclusive to RobotsGoneBad!