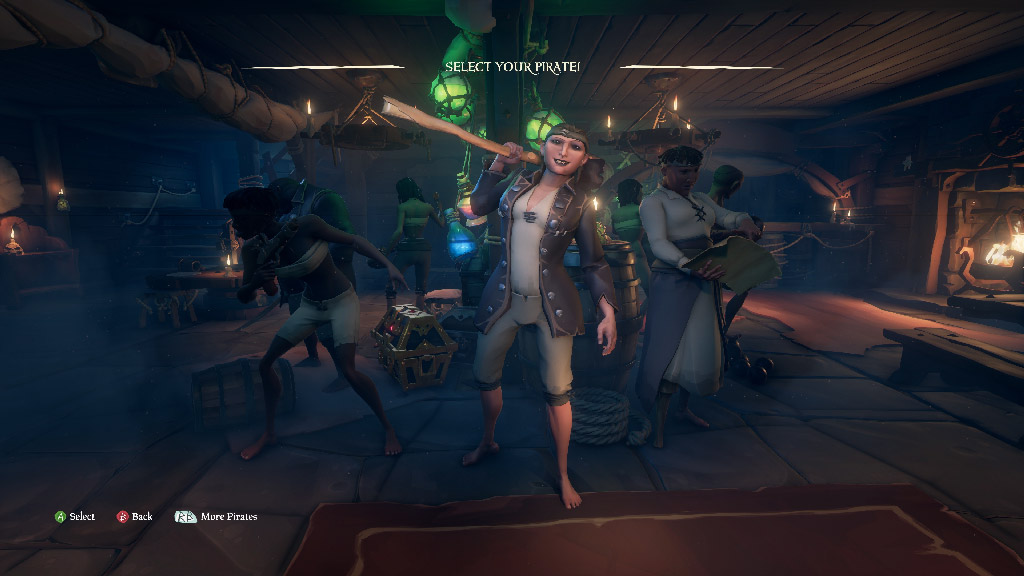 During my visit to renowned studio Rare in Birmingham, I had the chance to sink my teeth in their upcoming Xbox One exclusive, Sea of Thieves.

At first glance, it’s a little hard to pin down the game to one genre; it’s not quite a single-player game (although you can experience the game alone), yet it’s also not a typical multi-player game we have come to understand from games like World of Warcraft or Destiny. It’s an online game for sure, and Rare have been keen to emphasized on that, but in the 4-5 hours that I spent playing Sea of Thieves with fellow international media, I have been amazed by how the game strongly encouraged interactions between players to have fun. That’s right, Sea of Thieves may have your run of the mill quests, an English ‘core blimey’ charm to the many witty conversations and Monkey Island-inspired visuals, but what the game really wants you to do is to have fun with your mates online.

Desperately scrambling around to prevent your vessel from sinking is surprisingly fun, especially when you’re still getting to grips with how Sea of Thieves’ cavalcade of systems are meshed together. So many things need to be considered, whether it be the angle of your sails, equipment below decks or the position in which your ship is headed. Fortunately, it’s all easy to understand after a few sessions. I also must add that failing in quests, getting killed by skeletons, or getting your ship sunk by a rival ship is never frustrating or punishing.

Questing in Sea of Thieves comes in the form of voyages accepted from outposts. These normally involve travelling to an island and solving a specific puzzle in search of treasure. In one such quest that I’ve played, my crew and I shot ourselves out of our ship’s cannon (yes!) onto an island, best an army of skeletons and take down a final boss (himself a skeletal king). Disaster struck when us happy party swum merrily to our ship, only to be attacked and devoured by a horde of sharks. It’s the unpredictable nature of each mission in Sea of Thieves that leads to some wonderful moments of unintentional hilarity.

That’s something many games can’t deliver: an enjoyable time despite failure. Sea of Thieves never takes itself seriously, dealing in delight instead of frustration. And that’s not a bad thing. With a group of friends or strangers, Rare’s latest Xbox exclusive is an unpredictable experience that invites a sense of awe like nothing I’ve ever seen.

That said, the quality and fun in Sea of Thieves can differ wildly depending on who you get to matched up with. Real frustration can set in if the players (and not your friends on Xbox Live) you are matched with do not cooperate well.  This is because cooperation is truly crucial when operating your ship and is nearly impossible when one or more players aren’t pulling their weight. Here’s a tip: use the voice chat. It will make a world of difference in the game play experience. After all, swearing (lightheartedly, I must add) in-game is what gives that extra dose of charm to Sea of Thieves.

Swashbuckling combat is a core component in the game – it’s a pirate game after all! But other than a sword, pistol and rifle that I could arm my character with to combat skeletons and shares, combat in Sea of Thieves don’t seem to offer much in terms of variety and weapon options. Not in my multiplayer sessions at least. To be fair, Rare did tell me that there will be more weapons (and definitely more challenging enemies and bosses) in the final build. But I’m still hoping that the game will reveal a more robust combat system that won’t disappoint at least.

For players who just prefer to go solo, note that Sea of Thieves allows you to do that too. But the game is clearly intended to be a collaborative experience. Going at it alone is viable, but nerve-wracking without anyone to watch your back. And, might I also add, just too lonely.

Rare has done a wonderful job here. Sea of Thieves is one of the quirkiest and socially funny game that I’ve come across. But apart from the game’s simplified combat, exploration and quests, there still needs to be more content to ensure the game’s longevity. For instance, I would like to see mini-games (a rum drinking competition?), fishing and/or farming perhaps, and the opportunity to team up with other ships to engage in massive pirate battles. I also wished there was more I could have find out about the game’s economy; such as trading or auctioning (if there’s one). There’s something special about Sea of Thieves, and in many ways, I get the feeling it will do for online games what another genre-defining game, Legend of Zelda: Breath of the Wild, did for single-player open worlds: bring back the fun, social, and sense of wonder.

Sea of Thieves isn’t just the exclusive that Xbox One needs; it’s exactly what PC Gaming has been missing too.

Sea of Thieves will be available on Xbox One and Windows 10 on March 20th.

Aaron Yip is an industry veteran with more than 15 years of experience. When not spending time on his gaming PC and consoles, he can be found in Hyrule solving ungodly puzzles and collecting gems.
Previous post New update and invitational announced for Warcraft III
Next post Nvidia updates driver for Final Fantasy XV, Warhammer: Vermintide 2, and World of Tanks