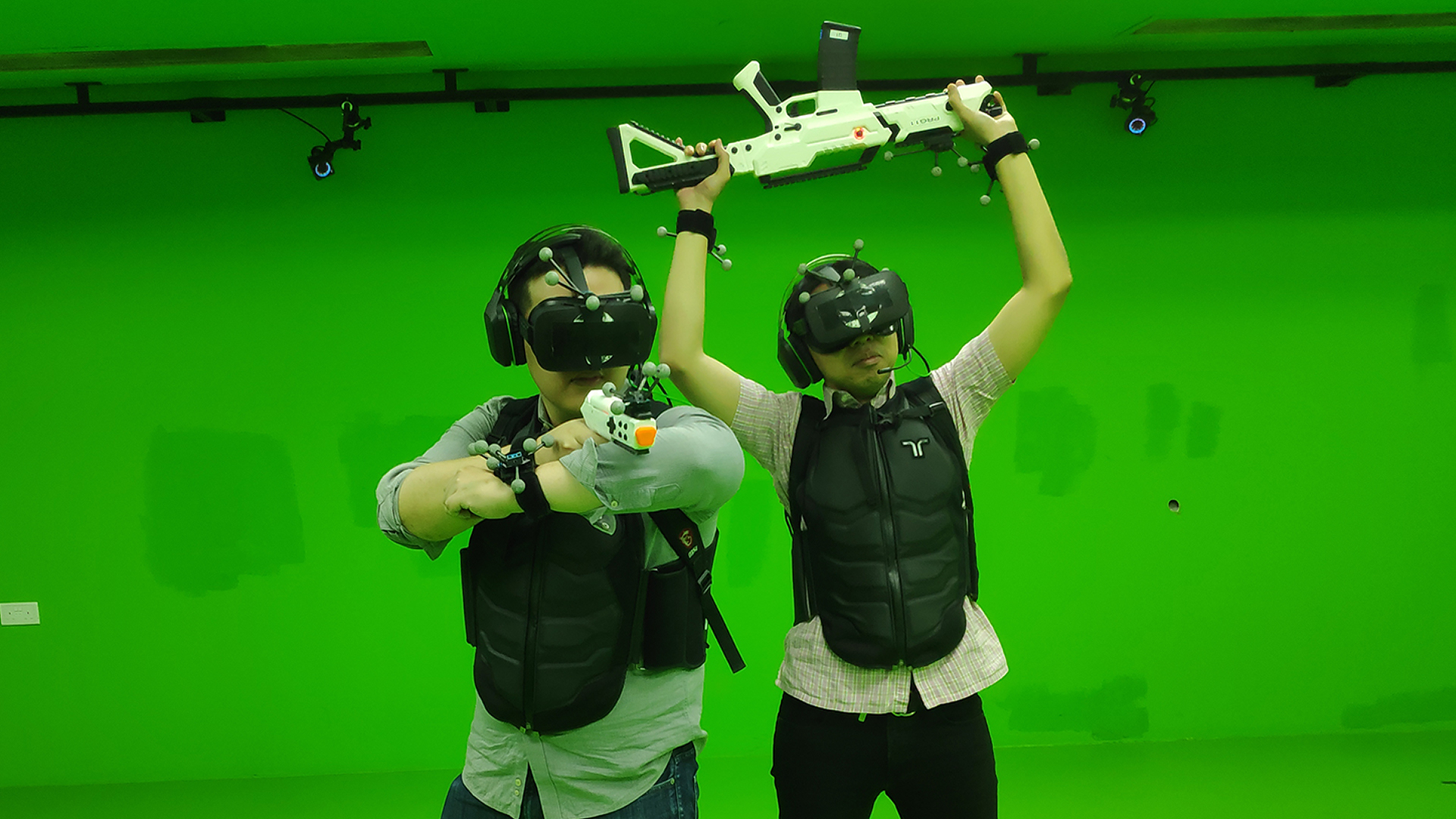 Ever fancy what it would be like to admire Earth from high up in space? You can now with Sandbox VR’s latest game, Amber Sky 2088. Unfortunately, the breathtaking view is marred by alien vessels of the unfriendly kind. We at GameAxis got a chance to give this sci-fi shooter a whirl so read on to find out what we thought about it.

What you’re in for 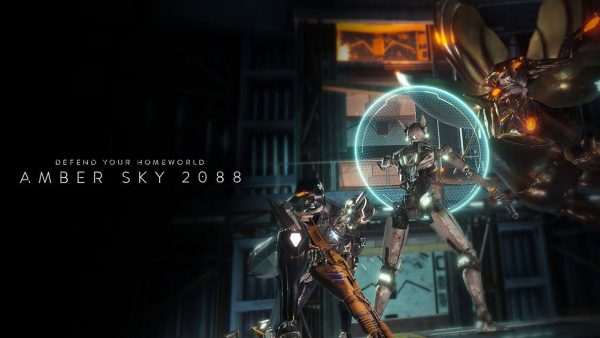 Amber Sky 2088 is a 2-to-6 player cooperative VR game. Your entire team will be together in a physical green room, moving about to shoot alien robots or dodge plasma attacks in a virtual fight for the planet. This freedom of movement is afforded by the Oculus Rift headets and MSI VR backpacks, so you aren’t tethered to any cables dangerously trailing across the floor.

One of the unique aspects about Sandbox VR is their use of haptic vests, with front and back vibrations to represent damage. They also have wrist- and ankle-mounted sensors to approximate your limbs, so you could shove and kick your way to safety — just be careful not to hit your own team! 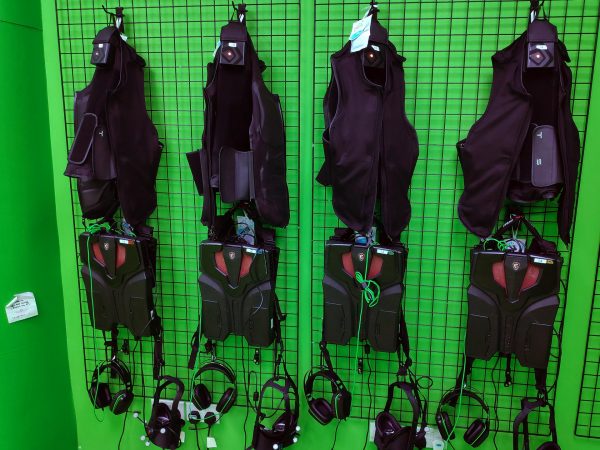 For Amber Sky 2088, players are separated into attacking and defending roles. That first group gets to wield assault rifles with an attached flamethrower, relying on the second group to ward off projectiles. The defenders get a retractable shield to do so (just hold up your left arm) and can even throw it Captain America-style, yet are tempered by a pistol so they aren’t grossly overpowered.

You don’t have to worry about available space as you can virtually see where you can walk, and getting too close to an edge will throw up a virtual red wall. Your other teammates are also represented in game, and it’ll take some communication and awareness to not bump into each other. Razer headsets are used for team comms, as well as to hear or contact your assigned game master. 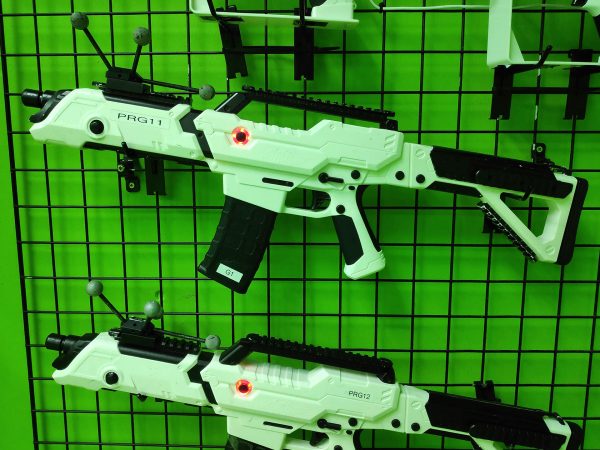 We won’t spoil the story or surprises, but in short you play as androids out to defend earth against an invading robotic force. The entire sequence takes place in a space elevator, granting you some spectacular views as the game goes on. The whole experience, from briefing to set-up and gameplay, should last approximately an hour. As a bonus, you’ll even get to take home some mobile photos and a pair of slick videos to show off to friends and family — or have them laugh at how silly it looks.

What we thought about it

Due to unfortunate scheduling conflicts, the GameAxis team was eventually whittled down to just two. It was up to of us, Wei Song and Ade Putra, to brave this VR gauntlet and emerge with scores worthy to call our own.

The upside here is that we’ve learned that a two-person VR session can work out. Though it makes for a less hectic and rowdy session, Sandbox VR is a viable choice for couples or groups short on numbers.

Wei Song: It wasn’t my first rodeo with VR games, but this was my first time trying out a full body tracking VR experience with haptic feedback. The setup and gearing were pretty simple and fully assisted by the staff there, making it friendly for those who aren’t too familiar with VR technology.

Ade Putra: Not my first VR rodeo, either. The friendly staff were pretty thorough in their explanations from the moment we stepped in. Although the waiting area looks small, it was more than enough space to lounge about in preparation for our session. The wrist and ankle sensors are strapped on outside, while the rest of the gear are mounted on inside the room. As an active NSman, it feels pretty baller to have your vest and equipment passed to you.

For my fellow short-sighted people, Sandbox VR uses fixed prescription degrees of up to 700, just shy of what I need. Thankfully, I didn’t have any trouble with my VR vision. The staff recommends using contact lenses if possible, and to remove watches or any jewellery that may interfere with the sensors. And don’t worry, the vests and headsets all smelled clean with fresh disinfectant. 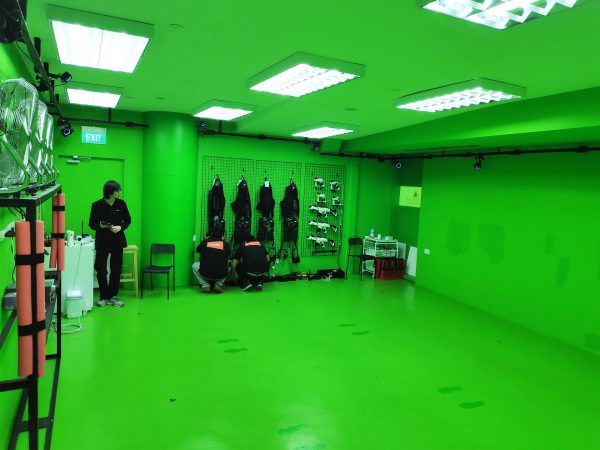 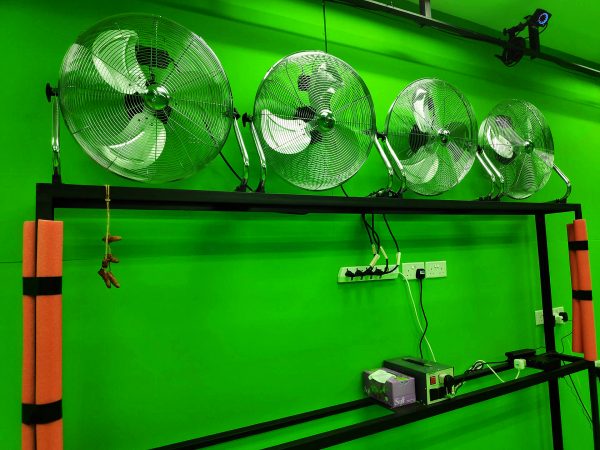 Wei Song: I must admit, I spent quite some time checking out the set up within the room. Though on the smaller size, the room felt like a studio for motion capture. Which isn’t too far off from the truth considering the whole room is green.

Ade Putra: If you’ve never seen a green screen before then boy are you in for a treat. I’ll agree that the room does seem a little small, reminding me of those open-view dance studios. Rather than the cameras, what immediately grabbed my attention were the electric fans on one wall and an equipment rack along another.

Note that Sandbox VR doesn’t have any lockers, so you’ll have to store valuables in your bag. I passed my phone to one of the game masters to help take photos, most of which you’ll see in this article — auto white balance hell, here we come.

Wei Song: Zombie shoot-em-ups in dark, dreary corridors and rooms are par for the course for VR games. So I definitely found the well-lit and expansive skybox in Amber Sky 2088 to be a refreshing change. Visually, the game is beautiful and I would often stare straight up to admire the sense of scale.

Ade Putra: Yeah, this definitely ranks high up on the “bright-and-beautiful” list. Granted, you start out in a cargo bay of sorts but that soon changes as you rise up the Beanstalk towards New Hong Kong. While Wei Song was looking up, I spent most of my time looking down. It’s pretty neat how I got that slight tingly sensation from the ever-increasing heights, despite knowing full well I was stupidly staring at the floor. There was no perceptible lag in the headset and the graphics seemed as sharp as they could be. Most importantly, I didn’t feel dizzy at all. 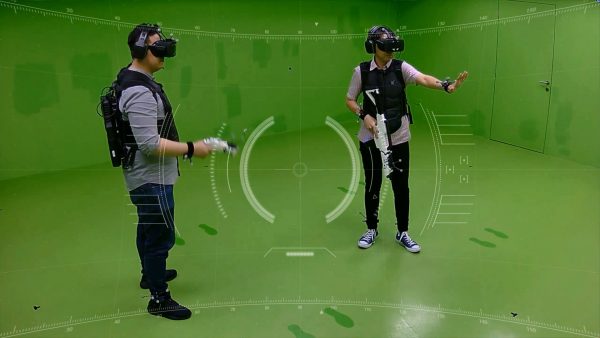 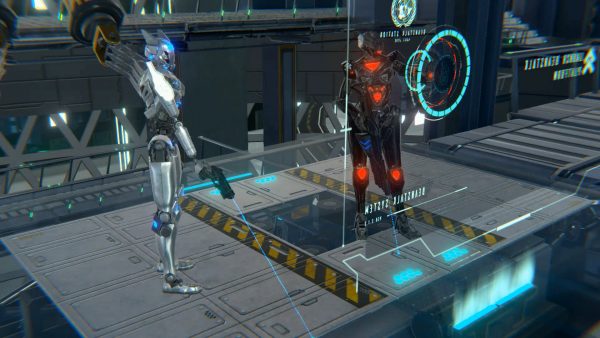 Wei Song: The game itself runs for around 25 mins and is split between two roles: the Defender and the Attacker. Playing as the Defender, my schtick was that I came with a pistol and an energy shield. The pistol wasn’t anything to write home about but the shield could be thrown, Captain America-style, which was pretty cool. Putting up the shield requires bringing up the forearm to the chest level, while throwing it required a swinging motion. Unfortunately, the sensors were rather finicky and it made the shield throw not as reliable as I would have liked.

Ade Putra: Even so, I saw some pretty sick shield throws that skewered baddies who lined up to die. That left me, the Attacker with an assault rifle, to deal with the ones everywhere else. There were robots running in from the sides, robots jumping down from the top, egg-shaped things spawning on the floor… look, you’ll spend plenty of time shooting when you’re not gaping at the scenery.

Reloads are automatic and can be manually engaged by bringing the rifle to your hip, but it takes quite some time for the process to complete. With just two players, that left us exposed for quite a bit; we even died at times, though you’ll simply have to hold your buddy’s shoulder for them to respawn.

While the rifle isn’t heavy for a desk-bound guy, I did find my trigger finger starting to tire about three-quarters through. You can’t hold the trigger down since that activates the flamethrower, so I had to flirt with carpal tunnel by madly firing on semi-auto until things died down. And then the bosses appeared. 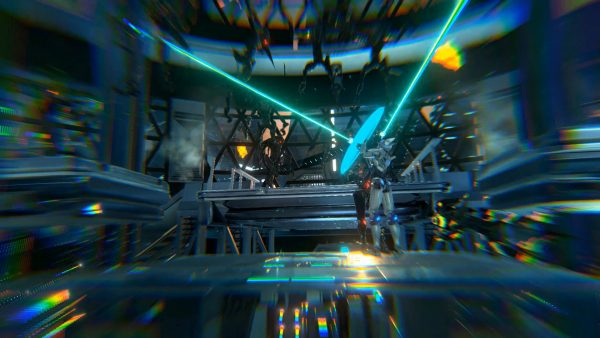 Wei Song: My main gripe with Amber Sky has to be how static it felt. It is understandable with the space constraint but it feels like a missed opportunity for players to explore this pretty world. Speaking of space constraints, the physical play area is rather small. This means friendly fire, by which I mean getting hit by another player’s rifle. The haptic feedback was a nice touch but a tad overused as it triggers from environmental changes, bullet fire, and enemy attacks.

Ade Putra: Uh, yeah, sorry about that. With no radar to speak of and the goggles filling up with hostile red, it can be hard to tell where someone else is — it happens in real life too, and rusty urban-fighting skills weren’t going to help against giant robots vomiting plasma everywhere.

But yes, I agree that this felt very static. It’s smart how they played off the size constraints by putting us in a space elevator and dazzling our visual senses elsewhere, but I felt short-changed in the “moving about” department. There’s an appreciable difference between looking around in VR and moving around in VR. Though I must say the haptic feedback helped, as I wouldn’t know I was getting gouged from behind otherwise. 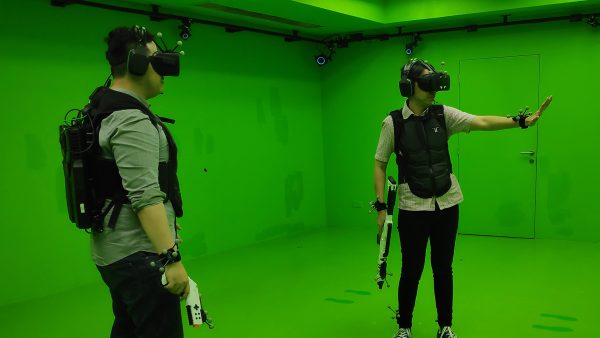 Wei Song: Overall, I must say that this was a fun experience; it is definitely a great primer for people who have never tried VR. The full body sensor setup has great potential for more interactive gameplay but for Amber Sky 2088, it was rather limited.

Ade Putra: When all was said and done, I left the green room smirking at all that happened — mixing up my ankle sensors so I was cross-legged for a bit, accidentally smacking Wei Song with the rifle, dodging a preposterously large laser beam. So yes, I think I had fun. Score-wise, we did pretty well too!

I believe Amber Sky 2088 would fare better with a larger team, but there’s still plenty to enjoy with just a party of two. I’d recommend it if you’ve never been to Sandbox VR. 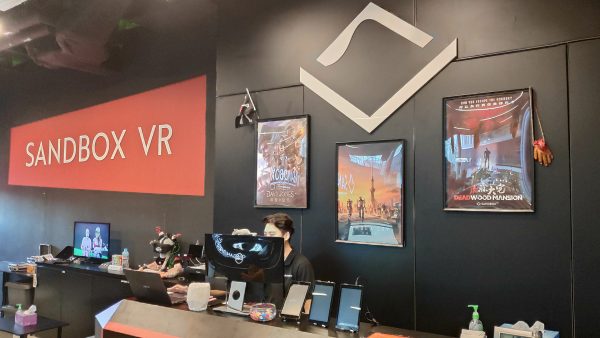 Sandbox VR is located at Orchard Central, which is directly connected to Somerset MRT station. To get there, look for the escalator by the massive Uniqlo outlet and head up to the fifth floor. With Sandbox VR’s large sign and open waiting area, it won’t take you long to find it.

Each VR experiences costs between $32-$42 per person as of writing, and you’re recommended to make a booking in advance. Players have to be at least 1.2 meters tall and must sign a waiver to play.

Disclosure: This session’s fees were waived for GameAxis.

We are Team GameAxis. And we will play games for food.
Previous post CES 2019: AMD’s answer to NVIDIA’s RTX gaming cards is the AMD Radeon VII
Next post Limited edition Kingdom Hearts III PS4 Pro releases in Singapore on 29 Jan