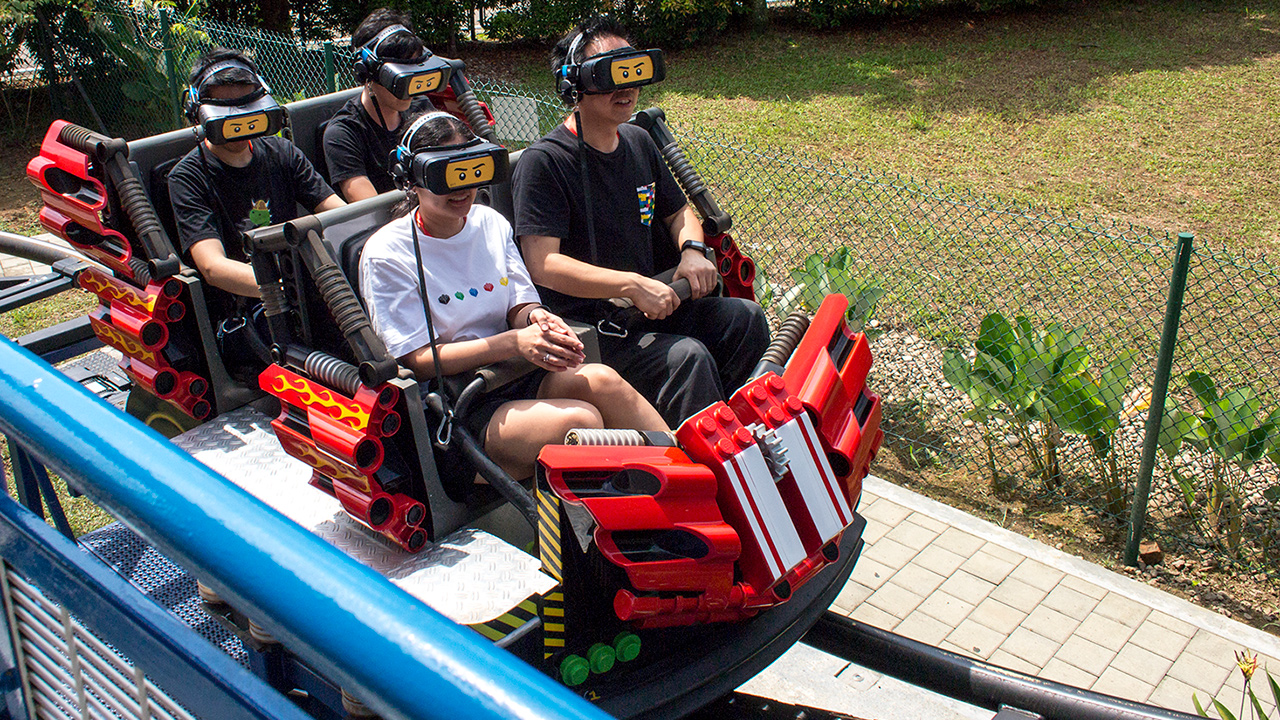 Legoland Malaysia is just about ready to open The Great Lego Race, the world’s first virtual reality coaster. Let’s get that straight: we don’t mean a 4D ride with VR headsets, but an actual roller coaster with VR headsets. Huge difference.

If you’re anything like us, you’re probably equal parts excited and alarmed. This is, in fact, the first of its kind in the world. Even among Legoland’s properties, Malaysia is the first to receive this upgraded ride thanks to holiday periods and seasonal weather. For those in Singapore, this unique experience sits only a few hours’ drive away.

Legoland kindly invited GameAxis for an early preview, and we walked away optimistic for what the future holds in store.

Legoland Malaysia is currently home to three roller coasters, one of which is the Lego Technic-themed ‘Project X’. It’s the most exhilarating of the lot, bearing in mind that this is a family-friendly destination and not an adrenaline-junkie’s haunt. The track is now repurposed for ‘The Great Lego Race’, though you may still take the ride without the headset to experience the track as-is.

For a basis of comparison, we did just that. Thrills-wise, we’re looking at two highlights: the initial lift hill drop and a series of Wild Mouse-esque turns that capitalize on the speed and agility of the small four-seater cars. The former is great – the track goes up to 18 meters high, and that bubbling trepidation as one ascends is always fun – though the turns did prove a little lackluster. The rest of the ride coasts through gentler turns and shallow drops before coming to a rest.

There are no loops or inversions here, mainly to lower the minimum age restriction. Presumably that makes for a safer VR integration too, since they’ll have to factor in headset weight for rides with higher G-forces. Another plus is that the short ride brings quick respite for those who wind up feeling dizzy – more on that later. 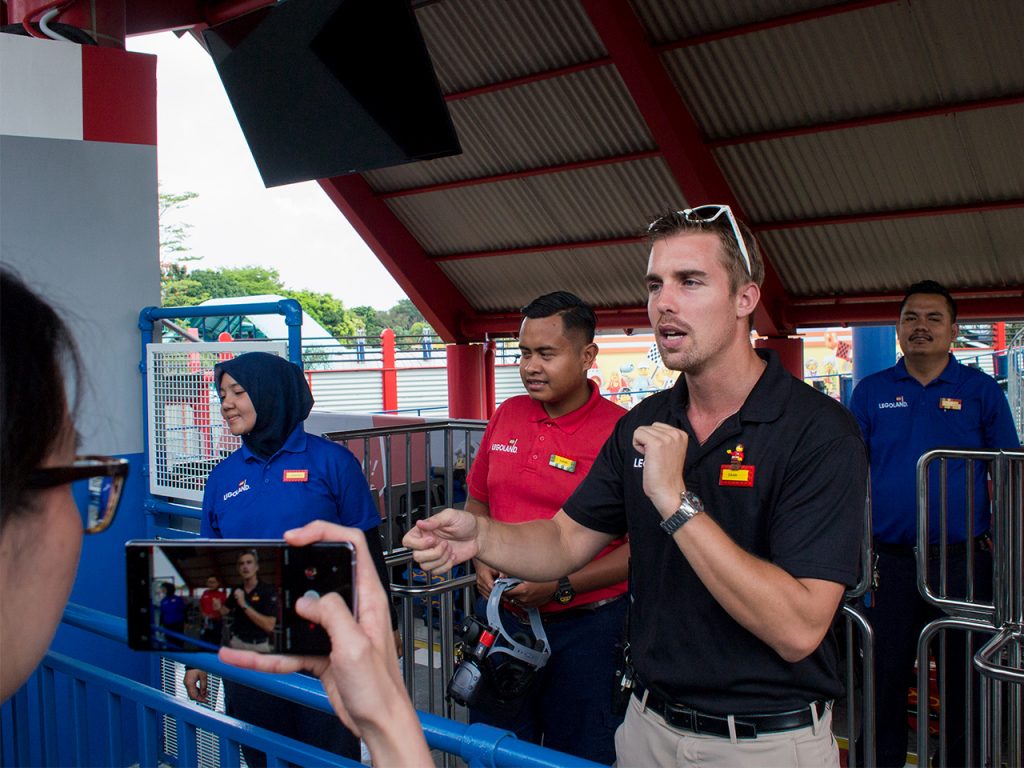 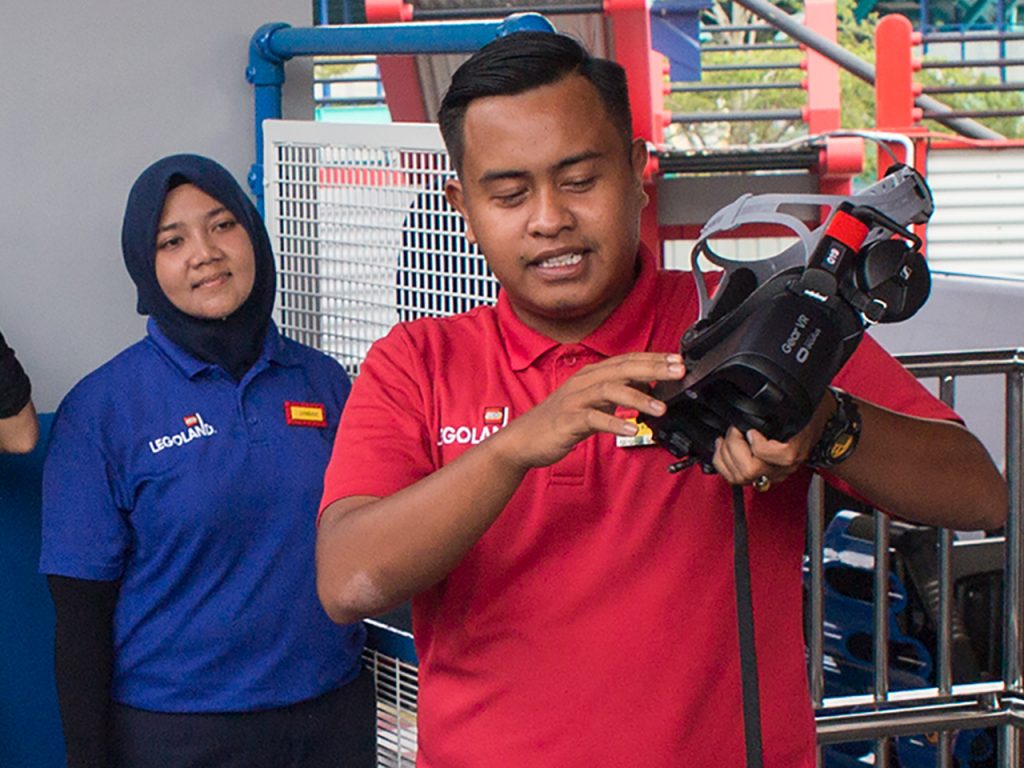 ‘The Great Lego Race’ uses a Samsung Gear equipped with a Samsung Galaxy S8 and a pair of headphones, all fitting together into a single contraption. The fit is comfortable and secure with an easy-to-use tensioner, the on-hand staff assisting if necessary. There’s a diopter too, so you’re free to remove your spectacles (for reference, I’m short-sighted with a spectacle degree over 750). Riders will adjust and test their headsets while in the queue, before removing them to enter the car. If the cushions feel wet then don’t worry, it’s just lingering disinfectant.

Once seated, riders secure their headsets by way of a strap and carabiner to the safety bar. Wearing the headset comes last, and it’s at this point you’ll want to make sure that the display really is working. Your Lego avatar should be seated in a car within a garage, with no input lag or warning messages appearing on-screen. Raise the staff’s attention if anything’s amiss, and especially is the screen is blank – if it isn’t working then, it won’t magically start working later. A whole bunch of us early testers essentially learned that the hard way and rode the roller coaster in complete darkness or with our characters spinning on the spot. That was a whole different breed of scares.

We later learned that the entire set-up uses Bluetooth to communicate. The four headsets pair to a black box in each car, which then relays positional data to synchronize the physical and virtual worlds.

Should some technical error kick in midway through, simply inform the staff afterwards. They’ll do a quick check and, if the headset is found faulty, pass you a new one for a second ride immediately – no re-queuing necessary.

We don’t want to spoil the ride’s virtual contents, so we’ll keep things vague. The VR world they’ve created is a sight to see, more so than the 4D projection rides elsewhere in the theme park. It isn’t ground-breaking or high-fidelity work, but the visual direction and colors certainly strengthened the idea of being transported into some Lego dimension.

There were plenty of moments that turned out great or were even improved (relatively speaking) thanks to the implementation of VR. That initial drop we talked about earlier? Cresting and hurtling down that hill felt much better since there was no track to see and perhaps take comfort from, just the ever-shifting Lego landscape before you.

Those lackluster turns from before were now sharp, sudden, and far more exciting as the in-game race ramped up in chaos. The final sweeping turns and coasts of the ride were replaced by the buzz of the final stretch, our virtual car straining to reach the finish line before a pirate ship, rocket-powered surfboard, and other themed racers do. It’s true: the Great Lego Race is one VR experience to remember.

It wasn’t all roses and peaches, of course. A major technical hiccup we faced were the drastic frame-drops at the very start and end of the race. The framerate smooths out once the cars start climbing, though that initial stutter may prove enough to leave some feeling nauseous. If you do end up feeling uncomfortably dizzy (nobody we spoke to did), our best recommendation is to just close your eyes – people have been doing that on roller coasters long before virtual reality entered the scene, so you’ll be just fine. Besides, we’ve already gone on a “blind” ride and left mentally unscathed.

The Great Lego Race marks the start of an exciting tech-infused future for Legoland Malaysia, and we won’t be surprised to see the roller coaster re-themed for future iterations. With even more attractions slated for the next few years, we may just see them pursuing other virtual or augmented reality installations. 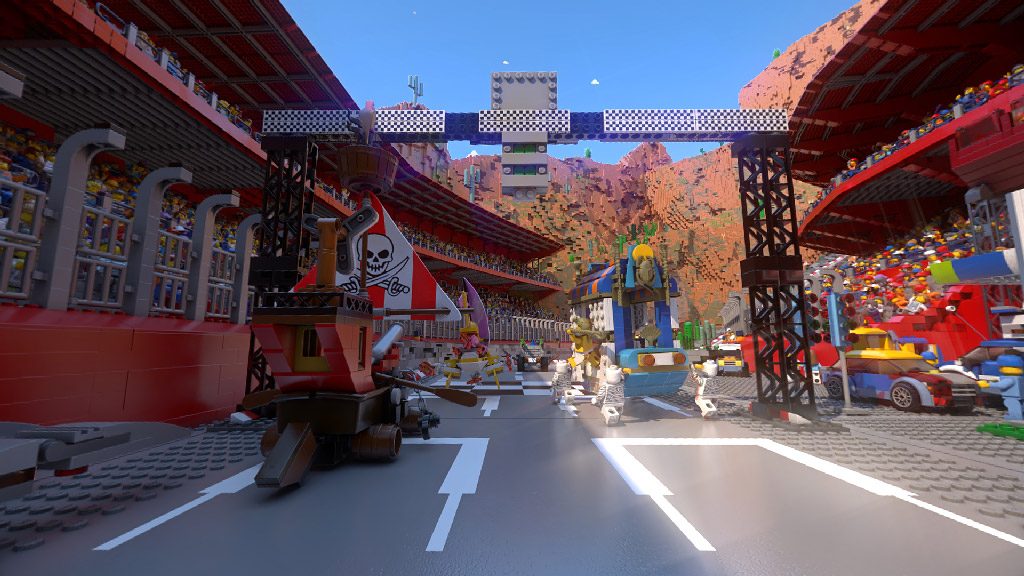 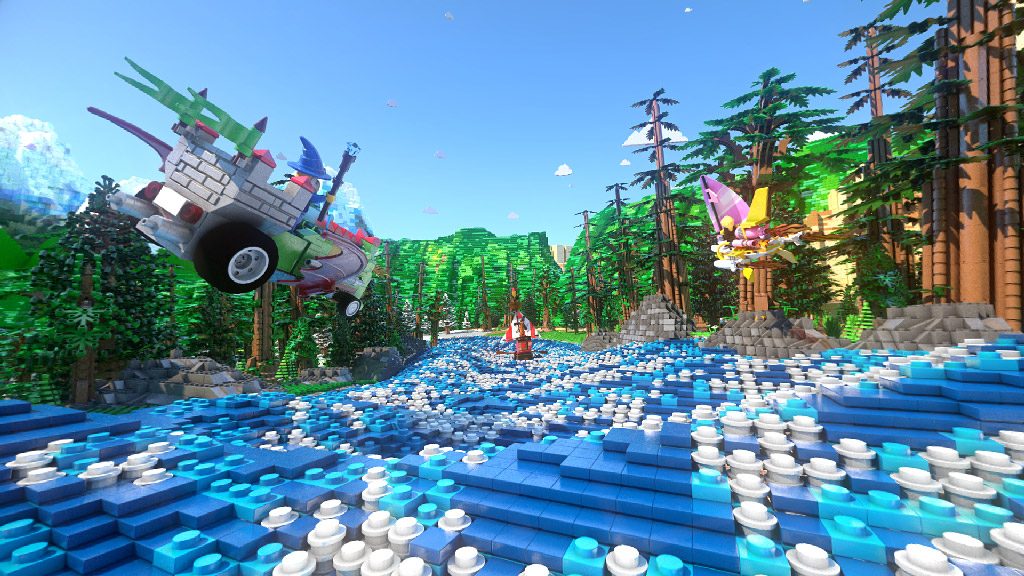 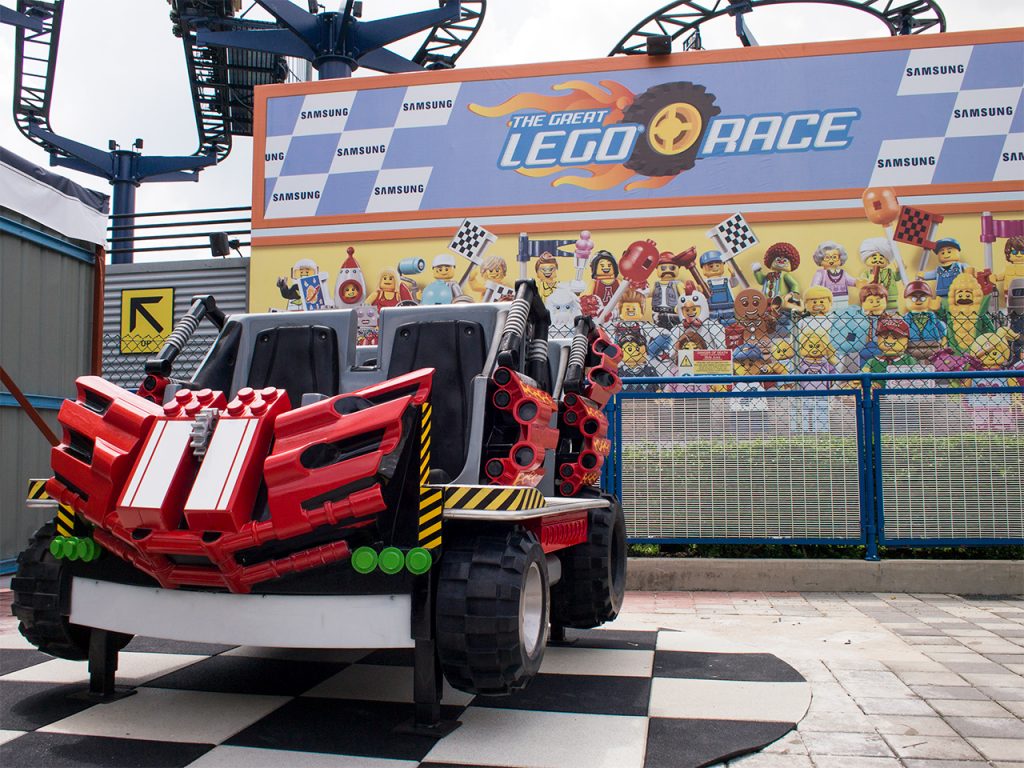 Keen to let your family try it out for themselves? Then start making preparations: the Great Lego Race officially opens on 22 November 2017.

Ade thinks there's nothing quite like a good game and a snug headcrab. He grew up with HIDEO KOJIMA's Metal Gear Solid, lives for RPGs, and is waiting for light guns to make their comeback.
Previous post Review – Wolfenstein II: The New Colossus (PS4) surpasses the series’ legacy
Next post A quick hands-on with Monster Hunter: World