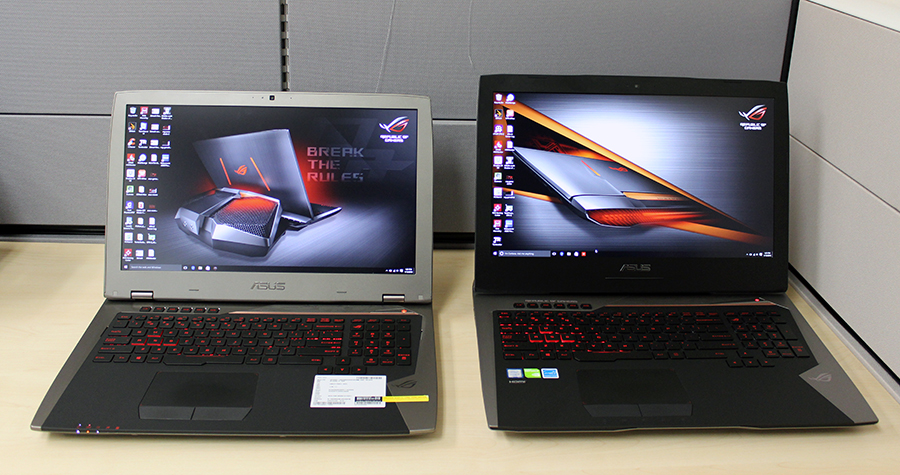 Notebook makers are giving their gaming laptops the over-the-top treatments these days. It’s not uncommon to find notebooks with desktop-class specifications, such as the Aftershock W-15 that comes with an impressive Intel Core i7-4790K processor (running at 4.0GHz with an 8MB L3 cache) and NVIDIA GeForce GTX 980M graphics card.

Or the MSI GT80 2QE SLI, which is probably one of the first gaming notebooks to feature a full-fledged mechanical keyboard, a pair of GeForce GTX 980Ms running in SLI and four incredible 128GB SSDs in RAID 0.

Not to be outdone, ASUS has also shown that their own R&D are also capable of conjuring up some nifty tech wizardry with their ROG GX700. The GX700 is a beast of a laptop with the first ever overclockable mobile processor (an Intel Core i7-6820HK that runs at 2.7GHz with an 8MB L3 cache), a desktop-class NVIDIA GeForce GTX 980, two M.2 512GB SSDs in RAID 0, and a whopping 64GB of DDR4 RAM. If you think a specification like this seems like an overkill for a gaming laptop, I haven’t even gotten to the best part yet. The ROG GX700 is also the world’s first liquid-cooled notebook.

Thanks to a hefty liquid-cooling dock, you get to squeeze some extra performance out of it. Or you can enjoy the relative mobility (it’s still a desktop-replacement class notebook, you know) of the notebook when undocked.

But those of you who aren’t already throwing money at your screens probably have some good questions in mind. For instance, how much performance does the liquid-cooling dock enable? Does it really run a lot cooler? Furthermore, the NVIDIA GeForce GTX 980 may be a desktop card, but it has still been shrunk down to fit in a notebook, even if NVIDIA has not compromised on the specifications in any way (number of CUDA cores, clock speeds etc…). Does it really offer desktop-equivalent performance? Pretty close.

Here’s another interesting bit. The dock actually automatically overclocks the CPU quite aggressively, boosting the CPU multiplier to 40 for a maximum Turbo speed of 4.0GHz – a huge boost over the default 2.7GHz base frequency.

Oh, and did I mention that it comes with its own luggage? If you thought the GX700 was over-the-top, the packaging it comes in only confirms that fact. The GX700 and the dock are nestled in some thick, dense foam, and it looks like ASUS thinks that you might possibly want to bring the notebook and its dock somewhere. Maybe a BYOC event. But boy, is the entire luggage heavy.

In addition, ASUS also sent us another class of their gaming notebooks, the ROG G752. The G752 is also a desktop-replacement class gaming notebook, but unlike the GX700 does not come with a liquid-cooling dock. But don’t let it fool you, because the notebook is no slouch either, equipped as it is with the latest sixth-generation Intel Core i7-6700HQ processor (2.6GHz, 6MB L3 cache) and an NVIDIA GeForce GTX 980M card. However, it comes equipped with a 1TB 7,200rpm mechanical HDD and a more modest – although by no means paltry –  16GB of DDR4 RAM.

Water-cooling dock aside, these are two very powerful and high-end notebooks. But as it turns out, even the premium gaming segment can be split into merely high-end notebooks, and those that border on sheer over-the-top luxury. The ROG GX700 clearly falls into the latter category on paper.

ASUS was treading a fine line in creating this beast of a notebook. Instead of striving for sheer performance at the expense of portability, it opted for the detachable dock that would allow it to slim the notebook down and still retain the ability to achieve desktop-equivalent graphics performance.

And now for perhaps the most important aspect of all – price. ASUS didn’t go to these lengths to create an affordable solution for the masses, and the ROG GX700 is a premium, luxury product through and through. At S$6,198, the GX700 isn’t something you just go out and buy on a whim. It’s not even likely to appeal to the vast majority of consumers, who will reason that they could build a much more powerful desktop system for that price. One can get the feeling that ASUS really only wanted to make a statement. An intent as an R&D showpiece, if you will.

I’ll be realistic here. The GX700 is a great piece of engineering and hardware, but I’m not advocating that you, as the average gamer, run out and buy it. But frankly, its price is not unjustified because of what it brings to the table. Everything is top of the line, even down to the mind-boggling 64GB of DDR4 RAM and all the latest interfaces, including one USB 3.1 (Gen 2) Type-C port and one Thunderbolt 3 port.

Then there’s the ROG G752, which is a much more representative sample of the vast majority of gaming notebooks on the market. At S$2,898, it is markedly more accessible than the GX700. Taken on its own, it’s actually a fairly strong performer in our gaming tests, more than matching up to other NVIDIA GeForce GTX 980M-equipped notebooks.

However, the thing that really drags the G752 down is its lack of an SSD. Its 1TB HDD feels markedly slower, even in regular activities like launching programs and browsing files. Fortunately, the storage drive can be easily upgraded after popping off the bottom panel, so you won’t be stuck with a whirring HDD forever.

Ultimately, I felt it would be unfair to compare the ROG GX700 and G752. Both may be high-end gaming notebooks, but they cater to quite a different crowd. The GX700 is without a doubt for those who want the best possible laptop gaming experience (and bragging rights). On the other hand, the G752, while not cheap by any means, is a more reasonable option for gamers who want a high-end machine, but don’t see the need for liquid-cooling or bleeding-edge performance.

This review was done with inputs from our sister publication www.hardwarezone.com

Aaron Yip is an industry veteran with more than 15 years of experience. When not spending time on his gaming PC and consoles, he can be found in Hyrule solving ungodly puzzles and collecting gems.
Previous post Square Enix uncovers Final Fantasy XV release date, movie, demo, and more
Next post Impressions: Uncharted 4 all set as the grand finale