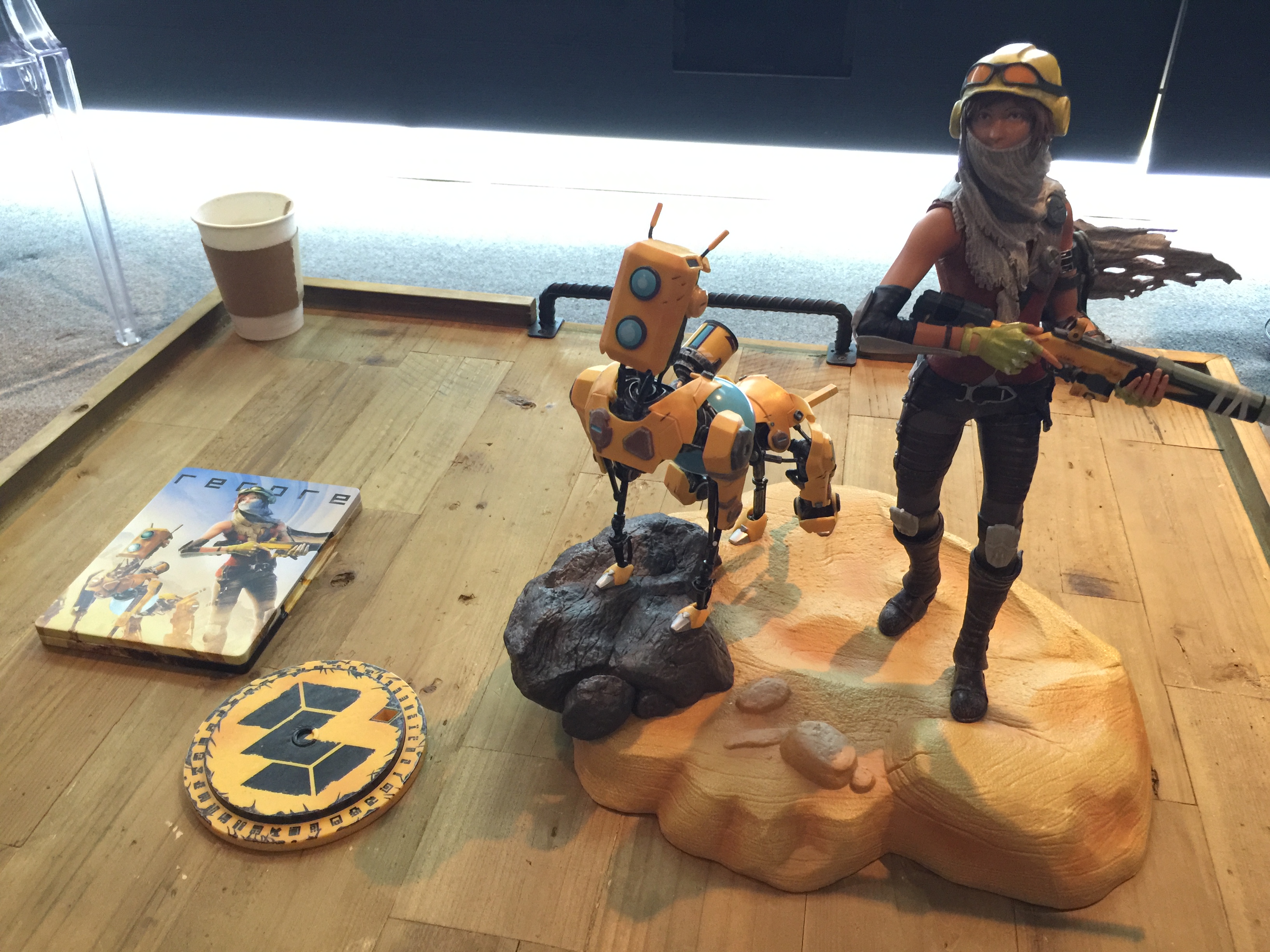 E3 2016: To say that the legendary Mega Man creator Keiji Inafune has had a rough year would be putting it lightly. With Mighty No. 9 being delayed multiple times, and then the launch of the game going as poorly as one could imagine, Inafune might really be banking on ReCore to be his saving grace in 2016. Let me tell you why by giving a rundown of everything we learned about Armature Studio and Comcept’s highly anticipated Xbox One title at this year’s E3.

Meet Joule Adams, one of the few remaining humans in existence. She’s traveled from Earth to the desert world known only as “Far Eden” to try and find a new home. Her long trek unfortunately didn’t go according to plan, so after waking up from cryo-sleep centuries into the future she must find a way to save the human race. Luckily, she recruits a couple of robot friends to complete her quest.

Throughout this desert-filled action-adventure title, Joule will encounter several “Corebots” that will not only act as companions, but also as tools that help her with the platforming and combat situations thrown her way. This bond with the band of robot pals could be what ultimately makes this game so special.

The planet itself is also rad. It’s mostly desert, but it’s overrun by robots (some who are nicer than others). This stark contrast of desert and technology is a great concept, and the mysterious Far Eden is almost a character of its own. I didn’t get to see much of them, but the underground sections were incredibly intricate with alien tech spread out everywhere.

In terms of gameplay, this is very much an action-adventure title with an emphasis on platforming and puzzle solving. The section we played required us to use one of our robot pals, Seth (who is the spider-like robot shown off in the E3 trailer), to get to previously unreachable locations, which was a breeze with his ability to climb on walls. Then we had to double jump, and forward dash our way through some high platforms. It wasn’t spectacular, but you can imagine how intricate puzzles and platforming will become once you have all your robots unlocked, and the platforming requires you to use them all.

This is where I’m most skeptical. You do have a gun in the game, but don’t expect to have to become skilled at using it. When aiming, the crosshairs will auto-lock onto the enemies, making it almost impossible to miss. In order to not make it incredibly monotonous, baddies will be color-coded, which means you’ll have to match the ammo color (by clicking one of the d-pad directions) to do massive amounts of damage. So your job is to juggle between all of your attacks and companions to suit the situation. Things can quickly get messy when you don’t clear out the enemy robots fast enough.

This was honestly my least favorite aspect of the game. I was just holding down the aim button and going hard at the not-so-tough machines. Again, the concept seems solid enough, and could work, but what I played was more of a slog. It’s obviously unfair to write it off right now, let’s just hope it gets better.

No, ReCore isn’t a Mega Man/Metroid Prime hybrid. But that doesn’t mean it’s a bad game.

Despite some reservations towards the final product, there’s plenty of reason to be optimistic about ReCore. The focus on switching between robotic friends to solve puzzles and conquering environmental obstacles could be refreshing. I just unfortunately didn’t get to play through sections that highlighted these moments well.

I also had a quick chat with the developers of the game, and Inafune was on hand to help answer them.

At the core of the game, pun intended, is ReCore a puzzle game, a platformer or a shooter?
We’re terming it as an action platformer. It’s a combination of exploration, combat and platforming. On some levels, there will be puzzle elements, but it’s very much about combat.

In the beginning the open areas were more platformer with a little bit of light combat. And when you got inside, there was a little more combat and very simple puzzle-solving.

We don’t have head-scratcher puzzles in the game. It’s more of a “how do I get there” kind of puzzles. We try to have an even balance between those things. Joule feels really good moving around doing her dynamic movement, something that’s just fun on platforming.

How linear or open is the world in the game?
In the beginning, gameplay will be rather linear for tutorial purposes. At a certain point the game will open up and the player will have a lot more choices. It’s not an open world game, but there is a lot of freedom for where they can go. There will be goal-impacted stories they will try to solve, but the players will have the choice of how they will go about it.

For the companion designs, or even the enemy robots, did Inafune go back to any of his past works as a basis of inspiration when he designed them?
I (Inafune) think I get a lot of inspiration from Japanese anime, and in doing so, I knew we couldn’t have something similar to that as it would not necessarily work on a worldwide platform. We worked closely with Mark and his team in art direction, and a constant communication help designed certain elements of the game that we felt would be widely palatable to our audience. We developed some unique styles, I wouldn’t say it would be like my past works. It’s more of a fusion of a lot of ideas that resulted in the design and unique look that you see.

Can the companions combine into one giant bot (hehe)?
Like Voltron? (laughs) No. That is an awesome idea, but no.

The game will be part of the Xbox Play Anywhere initiative, right?
That is right. It’ll be US$39.99. That’s our price point. The game will be coming out this September 13 worldwide on both Xbox One and Windows 10.

Aaron Yip is an industry veteran with more than 15 years of experience. When not spending time on his gaming PC and consoles, he can be found in Hyrule solving ungodly puzzles and collecting gems.
Previous post The full PlayStation VR set
Next post Horizon: Zero Dawn lets you hack nearly every machine in the game