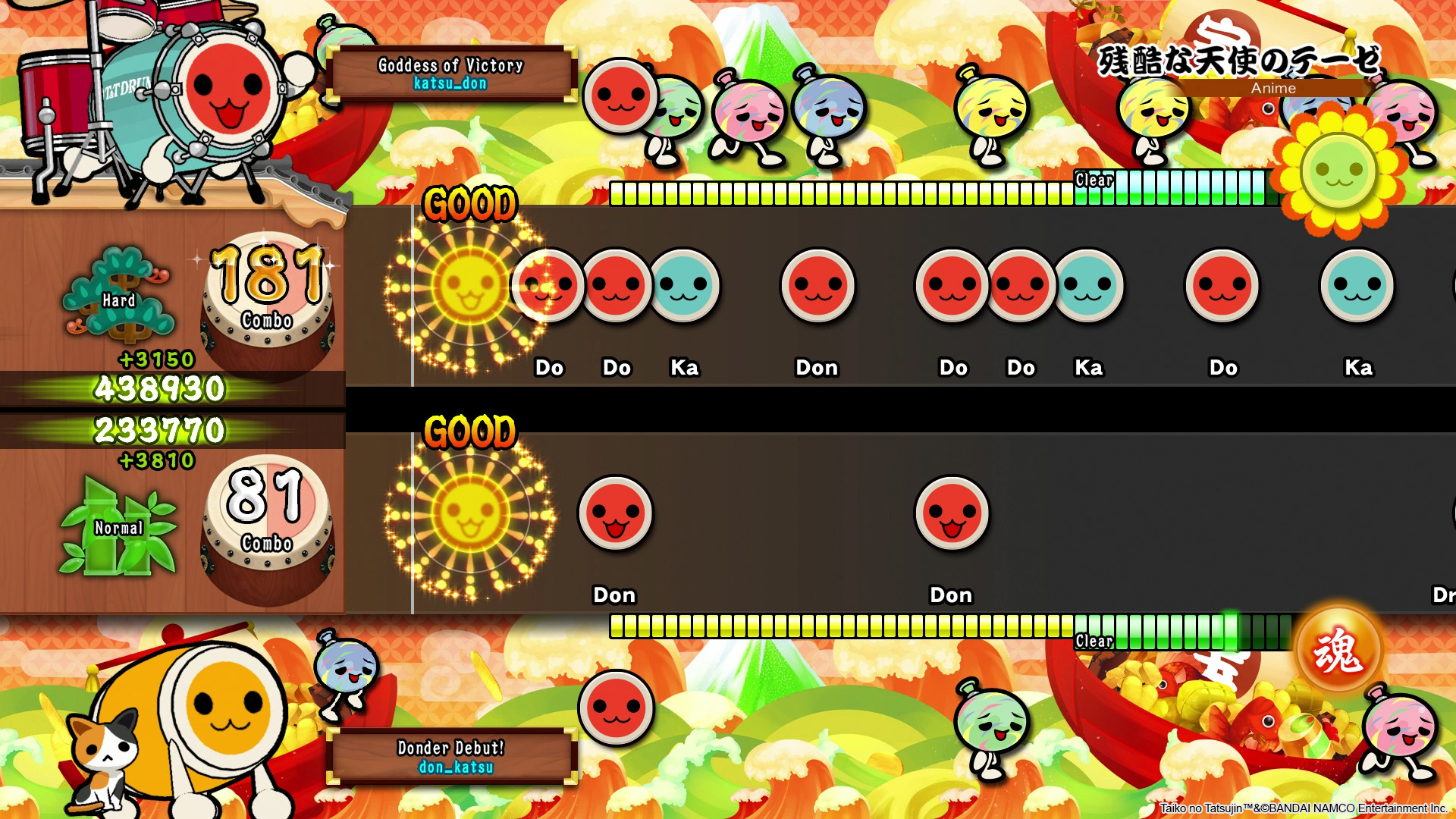 Remember when arcade games started making their way to home consoles? I’m sure many can recite a long list of titles that did, along with the many fond memories associated with it. Although the gaming landscape has drastically changed since, arcades worldwide continue to soldier on. There are a variety of reasons for this, including nation-specific ones, but universal to all are the cabinets themselves – bright, massive, and loud, purpose-built for that one game alone. It’s easy to see the appeal.

Iconic among the reigning rhythm game scene, even in Singapore, is Bandai Namco’s Taiko no Tatsujin series. Debuting in 2001, it stood apart from its competitors by favoring accessibility, not complexity, appearing more like a toy beside Konami’s intimidating beatmania IIDX. From replacing the rows of buttons with a single, large drum, to the cute mascot siblings Don Wada and Katsu Wada, everything about it spoke to players having a great time. Even for seasoned veterans.

The publisher recently announced Taiko no Tatsujin: Drum Session! (Taiko no Tatsujin: Session de Dodon ga Don) for the PlayStation 4, ending a decade’s absence from Sony’s home console – it spent that time frolicking with Nintendo, portables, and region locks instead. Just as exciting is the creation of a new “TaTaCon” drum controller, courtesy of Hori, and I was dead-set on getting a feel for it at PlayStation Experience 2017 SEA.

My first impression of the controller was, obviously, it’s size. Moving from the massive Japanese taiko to what is basically a Malay kompang is somewhat jarring, especially if you haven’t touched a TaTaCon in a long time (I have no experience with the Bluetooth version released for iOS). While the demo station had us standing, the drums were placed at waist-level, which is lower than preferred. That’s something I’m still mulling over as these new controllers have buttons on the lower rim – would they be easier to strike if the drum was at the more familiar chest-level instead?

More pertinently, they seemed less sensitive than their arcade counterparts. Bear in mind this was after nearly eleven straight hours of convention use, though that shouldn’t excuse any durability concerns. Of course, it could have been a matter of calibration, though that was something I couldn’t mess with at the time. All I can confidently say is that there were a number of easy notes that did not register, and that I would need more time with the controller to figure out why.

Stability-wise the drum didn’t wobble but it did shift backwards on the right, forcing me to realign the thing after every song. I’m not sure if this is due to my heavier hand from the poorer sensitivity or to the drum’s base itself. Either way, you’ll want to place it on a mat of some description, as with past TaTaCons.

As it stands, I’m not convinced of the controller’s build quality without getting a second shot at it, particularly at its hit detection. There’s every possibility that those were not final production samples, but I trust Hori – a venerable player in the peripheral market – to deliver when it counts. After all, this is the first new PlayStation-compatible TaTaCon since the PS2 era, and there are many who’d pick this up for the USB connection alone. While we’re on the subject, maybe treat the fans to a larger Pro version like they did the Wii U?

Our demo session lasted two songs – my partner picked Radwimps’ “Zenzenzense” and Pikotaro’s “PPAP (Pen-Pineapple-Apple-Pen)” out of familiarity – and they were enjoyable in their own right. The game wisely lets you pick separate difficulty levels for each player, meaning both can enjoy the song at their own pace. In other words, it’s a perfect family or party game in that it takes less time and space to set-up than something like Rock Band would, with difficulty levels suitable for various age groups.

As with any rhythm title, the core gameplay doesn’t change, only the setlist. Taiko no Tatsujin: Drum Session! will launch with more than 70 Japanese songs spanning various genres and sources, including other Bandai Namco games such as Tekken 7 and THE IDOLM@STER.

New to the PS4 edition is an online ranked mode as well as friend and guest sessions, though we didn’t get to explore further. What we do know is that the latter lets you play against special guests and characters such as Doraemon or Heihachi, who have their own voices and actions.

Post-launch DLC is already planned for the Japanese version, including a season pass, but nothing to that effect has been announced for the English-subtitled version just yet.

Taiko no Tatsujin: Drum Session! is the sort of game that fans would readily pick up on day one, no questions asked. The challenge for Bandai Namco is to convince a new generation of PlayStation players to jump aboard, though even that shouldn’t prove too difficult considering the IP’s fame and the company’s strong foothold with fans of Japanese entertainment. And if that wasn’t enough, Taiko no Tatsujin does fill a void left by other big rhythm games: licensed music.

There’s no word on the English release date so far but the Japanese version launches on 26 October 2017, with the game and controller bundle priced at 9,980 yen (S$124). Ade thinks there's nothing quite like a good game and a snug headcrab. He grew up with HIDEO KOJIMA's Metal Gear Solid, lives for RPGs, and is waiting for light guns to make their comeback.
Previous post PSX SEA – Gran Turismo Sport might be the most realistic driving simulator yet
Next post Microsoft continues refining Xbox One’s UI in latest update