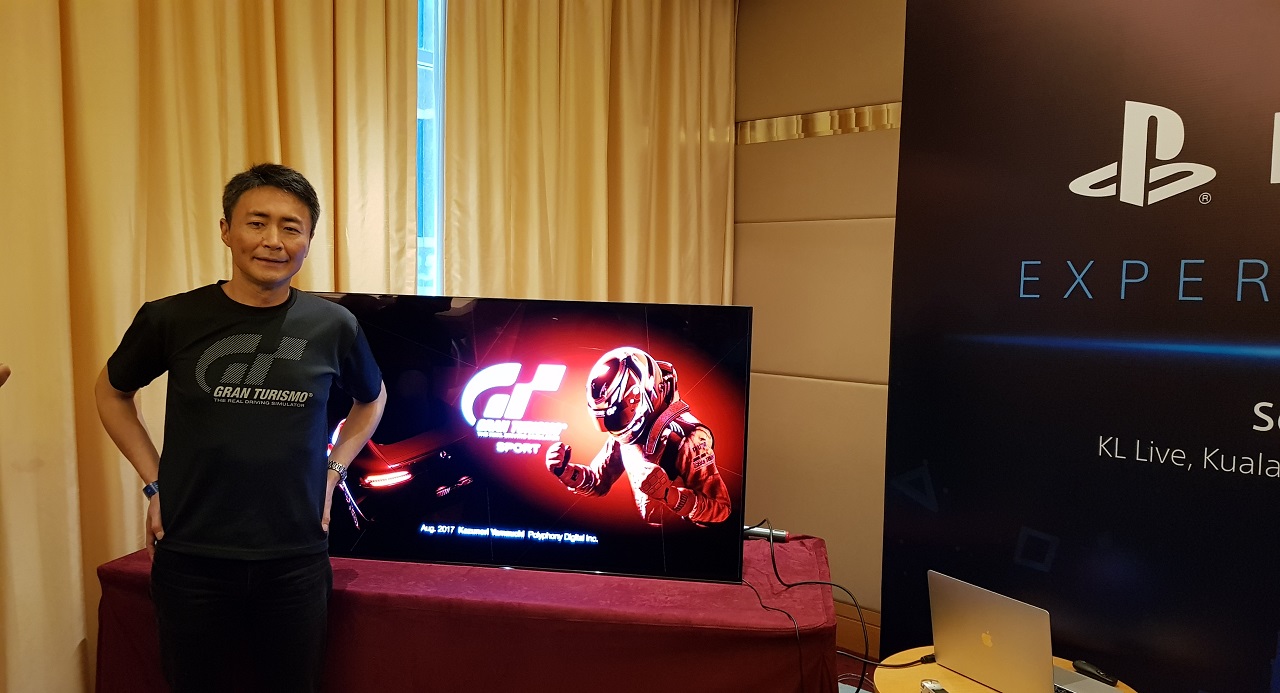 TL;DR, the game’s visual fidelity is so good that it’s hard to blur the line between virtual and reality.

Yamauchi began by sharing the visual technology that went into developing the latest Gran Turismo Sport (GT Sport). The game is currently the only driving simulator that supports 4K, 60 frames per second, HDR and VR (Virtual Reality) at the same time. Regarding brightness, the game is ten times more powerful than the range of current TVs that are out there in the market. This means that GT Sport will be future-proofed for new and future TV panel that supports better brightness and contrast levels.

Additionally, the game’s will also have a wider color gamut support. Right now, the game’s current standard RGB is beyond the capabilities of a conventional TV. With past Gran Turismo titles, the iconic red color of a Ferrari was not possible to display correctly out of then-TVs. Yamauchi was proud to announce that the latest GT Sport game will now be able to present 100% color accuracy of not only Ferrari, but other cars as well. The team also worked with a visual imaging department within Sony to develop an image capturing technology that allowed them to capture the range of bright and dark colors of nature as accurately as possible. With this, it took them four years of development to create the visual differences from SDR to HDR. See below.

As for the game, GT Sport will offer 28 different tracks from 17 locations at launch. It will also have a total of 150 cars. Yamauchi highlighted that all of these cars are fourth-generation models created from scratch. The rationale for building them from the ground up was necessary so as to be able to reuse them for future GT titles, because models used for past GT titles weren’t created with newer visual requirements in mind – such as 4K and HDR. As you’d expect, Polyphony Digital went through great extents to create the interior of  each car as precisely as possible, and it took them six months to complete just one single car.

GT Sport will also offer more playable modes, apart from the standard campaign and offline challenges modes, than previous titles released in the past.

One such mode is the newly included Sports. With Sport, you will get to experience two championship series throughout a year – the Nations Cup and Manufacturers Cup. Nations Cup pits countries against one another and is very much the World Cup of the automobiles world. Manufacturers Cup on the other hand, will have brands going against one another (e.g. Audi vs Mercedes). Perfect for loyal fans of a particular car brand.

What’s most interesting, was Yamauchi mentioning that winners of these championship series will receive their physical awards at the prestigious annual FIA (Fédération Internationale de l’Automobile) Prize Giving Ceremony Gala. These winners will be standing on the stage alongside real-world motorsport legends such as Sebastian Vettel or Louis Hamilton from Formula 1.

The partnership with the FIA does not end there; players will also get to earn an official FIA Gran Turismo Digital License in the game. By meeting in-game requirements (and passing them), these digital license are as good and valid as a real world motorsport license. Yes, playing and driving well in GT Sports can now earn you a real world license. The catch, though, is that this arrangement is only valid for 29 countries for having expressed interest in supporting it. Singapore and Malaysia, unfortunately, are not part of the interested group.

“Scapes” feature in the game.

Finally, Yamauchi revealed a new mode called Scapes. It’s not secret that drivers (and many gamers in general) love taking photos of their favorite sports car against the backdrop of beautiful scenery. Series allows players to position their cars from any angles, and with real-world locations that they can choose as their background. These photos can then be shared on social media or even be used as your favorite desktop wallpaper. It’s not a ground-breaking feature by any means (Horizon: Zero Dawn has an excellent photo mode), but will certainly be welcomed by all GT fans.

Gran Turismo Sport will be out on PlayStation 4 on October 17th. The game will support 4K, HDR (with a PS4 Pro and 4K-compatible TV) as well as PlayStation VR.