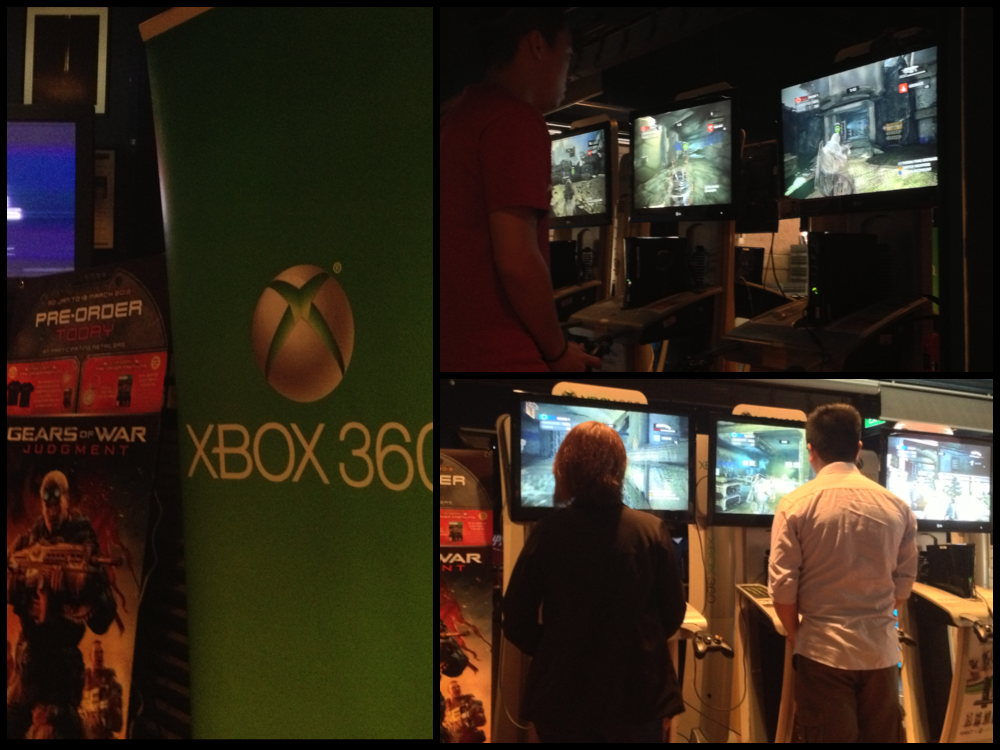 We were invited to Microsoft’s Xbox 360 sneak peek at Gears of War: Judgment recently and tried out the new multiplayer mode, OverRun.

OverRun pits the COG members against the Locusts in a an attempt to stop the latter from destroying their precious generator within a set amount of time. The event invitees were split into two groups of five for some multiplayer action, with each team having a turn with either factions.

We got dibs on Team Locust by default and were handed the basic tier of Locusts to become such as the gun-toting Rager, the jumpy Wretches, the healing Kantus and my personal favourite, the Ticker that has the ability to break down COG fortifications and barbed wire, making Team Locust’s breeching that much smoother.

Which was pretty much the strategy to adopt, as we soon discovered. Some of you will know that the Tickers, though low in health, move really fast and comes really handy in breaking through fortifications from the direction the COG aren’t paying attention to if you have teammates as Ragers or a Kantus keeping them busy on the front. The annoying little bugs are also good for self-destructing around the generators, dealing some good damage for a start.

As mentioned, the Kantus is pretty much the Medic a la Team Fortress 2, but it also packs a Hammerburst rifle that can take down COG pretty easily. As the healer, it has the ability to keep the team healthy by chaining healing effects across members. The Wretch also has the ability to climb walls and jump over COG fortifications to perform melee attacks against the good guys.

Eventually the game will open up the second tier of Locusts, which offer up the bad boys like the burrowing Corpser, the Grenadier, the spiked-shield-carrying Mauler and the acid-spitting Serapede, but at a cost of points. This is where things can get a little one-sided.

The Mauler is nearly invincible when it gets the shield spinning, with the spikes capable of shattering fortifications and sanding down the generator goal. The Serapede was also made to mangle COG fortifications, but it can also spit some acid. Then there’s the Corpser, hands down the most destructive and the envy of the other classes. It can burrow underground and avoid everything aboveground and take out COG in one vicious clawing, also effective in generator termination, with two Corpsers easily ending the round in seconds.

The roles get swapped after the generators for the round are destroyed and the Locusts become the COG. In the multiplayer demo, however, we were relegated to the classes the Xbox terminal was assigned to. The classes include:

I was handed a Soldier on this Xbox and didn’t discover the ability to toss ammo crates until about halfway. These ammo crates are touch & go so any teammate, soldier included can get their guns topped up by walking past one.

Ammo crates also provided me with a fighting chance against things like the Corpser with my new Booshka grenade launcher, allowing me to pack 4 shots instead of the usual 2 given during each respawn. While proving effective, remember that we could not switch roles during the preview, so it was a hit and miss with the generator protection.

Based on post-game comments, it seems that the Scout was in need of ammo more than the others so sodier units are definitely handy there. Engineers leave themselves vulnerable when taking care of fortification repair, too.

One-sided is right. Eventually Team Locust won no matter which team was on it, which can change when the locks are removed in the final game. The team with the least amount of attack time playing as Locust and COG in one session, will win the session.

Gears of War: Judgment is an Xbox 360 exclusive by People Can Fly/Epic Games for Microsoft Game Studios, ready to roll out on March 19th.