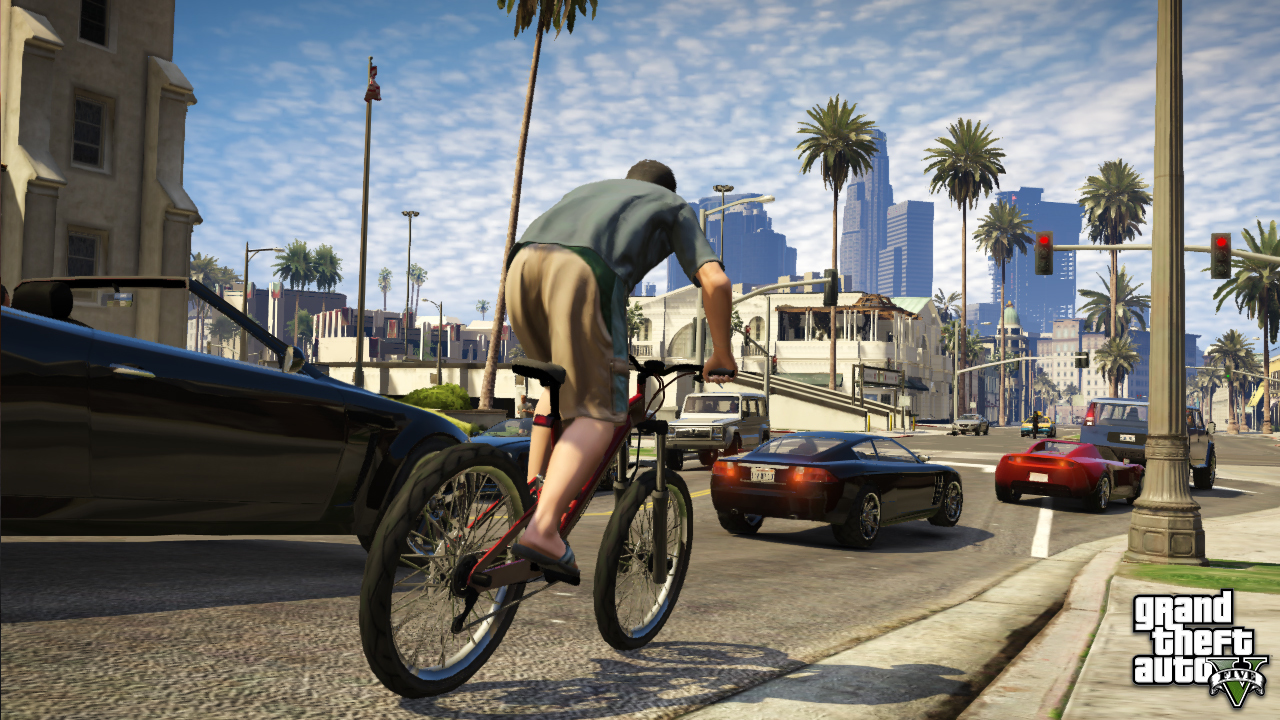 The first year’s anniversary of Grand Theft Auto V’s release is tomorrow. We all remember the day we saw it, don’t we?

Slowly revealing itself, with the tune by Small Faces playing over the very first trailer, the new locale for the fifth numbered instalment of your favourite havoc-causing franchise. Here, Watch it again.

That trailer made its debut in October 2011. Sure seems like yesterday, doesn’t it?

Much fell silent from there, until much later when we were handed not one, but three protagonists. We spent the end of 2012 wrapping our heads around that. How do you play this game with three player characters? Rockstar Games locked down its release date for September of 2013, which, while pacifying us, wasn’t much to go on.

Seven months went by, and the answer was revealed in the first gameplay trailer. Protagonist-switching and co-operative single player missions. And that was it. Minds were blown further when the details for online multiplayer took the form of GTA Online.

It’s been a year since Grand Theft Auto V made its way to our consoles on the moment it hit stores on day one. Many of us called it possibly the best game in the entire franchise, selling over 11 million copies within the first 24 hours and breaking all of Rockstar Games’ and parent company Take Two’s expectations. The launch of GTA Online was rough, though a hefty sun of 500,000 GTA Dollars hushed most of us up.

We’ve moved on from then. And lot has changed since. Rockstar Games has released a fair amount of free content updates (and bug fixes) so there’s always something to come back for. Especially for those of you with a second life as a no-good street thug online.

From the Beach Bum update to the “I’m Not a Hipster” update, GTA Online (and some single-player offline experiences) have been tweaked with new vehicles, weapons and clothing choices. Limited-time campaigns like the December Holiday Special and the Fourth of July update brought snow and fireworks into the game.

But of course, all of us kinda know what we really want at this time. Heists. Robbing convenience stores for petty cash is fun, but having a taste of it in-game in various flavours didn’t quite satisfy players, especially since we couldn’t empty a bank vault with friends. Rockstar has promised its release some time soon (perhaps tomorrow in time for the one-year anniversary?), and I think this is something probably worth doing right and waiting for.

For now, Rockstar Games has promised the release and update of Grand Theft Auto V for PC, PlayStation 4 and Xbox One. So while it might not be a full-fledged new-generation-console exclusive title, it is a great bridge to mark the ending days of the PlayStation 3 and Xbox 360 and pave way for the new.

What will the rest of this current numbered game bring? GTAIV had two whole content expansions packs with two distinct themes in the same city. Will we see expansion packs for GTAV? What do you hope for GTAV’s future?