Home / Features / The new tech for MSI’s ‘Next Gaming Dimension’

The new tech for MSI’s ‘Next Gaming Dimension’ 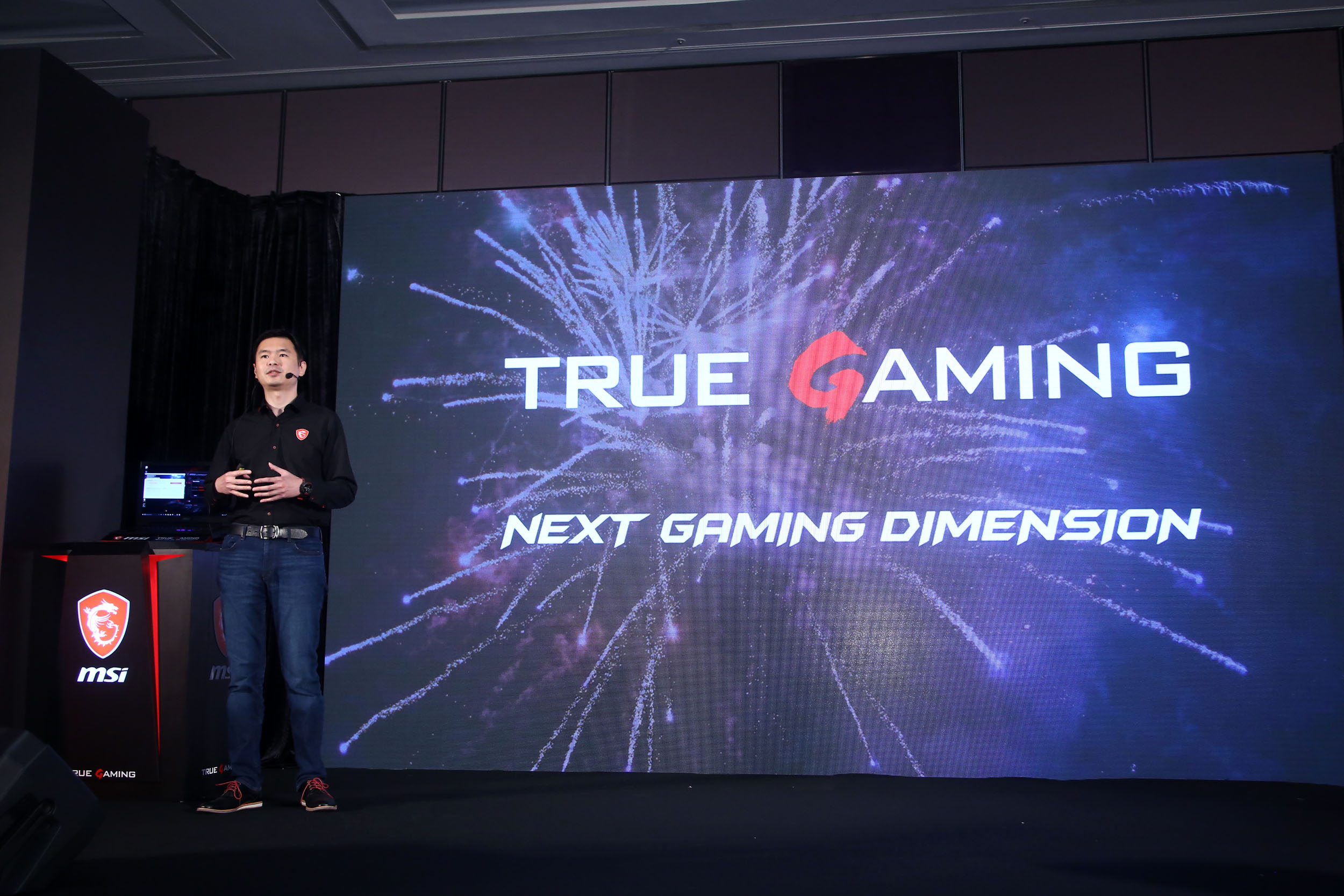 Other companies may make gaming a part of their business but for MSI, gaming is their business. It’s a key takeaway from the company’s press conference at Computex 2017, and this year’s tagline promises to take us to the “next gaming dimension”.

The big question is “how” and, to that end, MSI has introduced five innovations to give their gaming notebooks a keener edge over its competitors. Before diving into just that, however, MSI Head of Global Notebook Marketing Derek Chen gave us a quick primer on a common query: why gaming?

To answer that, Chen says we should look back at the state of the industry a decade ago. In the old days, putting together a high-end notebook meant slapping a powerful CPU and GPU together before calling it a day. MSI knew it could be so much more so they fully committed to the gaming industry in 2007 by releasing the GX600, an overclocked notebook – the first of its kind. The company continued paving the road with more world-firsts, such as the GX780 with its RGB keyboard or the GS70, the thinnest 17-inch model at the time, just to name a few.

That brief timeline of accolades smoothly set the stage for what is to be a new world-first achievement for MSI, one you may find among the latest developments below. Heat management remains the biggest challenge for gaming notebooks. It’s the most critical component when it comes to performance, especially in an era of smart CPUs and GPUs that throttle output in the face of overheating. Cooler Boost 5 builds upon the technology that MSI has already spent years developing to further enhance cooling efficiency.

Where the average number of heatpipes in a notebook is two to four, sometimes even five, MSI bucks the trend by pushing that number to seven. Combined with four ventilation ports and two 29mm Whirlwind Blade fans (which provide higher air pressure), it allows notebooks to reach up to 30% higher performance as measured by 3D Mark 11.

A variant known as Cooler Boost Titan amazingly bumps that heatpipe count to twelve (though it may differ by model), allowing MSI to develop products such as the Vortex G25, a small console-sized desktop PC yet with all the power of much larger peers. For notebooks, the updated Cooler Boost tech also translates to a more comfortable gaming experience, with surface temperatures all measuring lower than similarly-configured competitors.

With video games being such a visually-oriented medium, it’s no surprise that MSI are pushing for advancements in display technology. What they’ve managed to do is to cut down response times on a 120Hz panel to 3ms, eliminating motion blur and smoothening animations – features best appreciated for any fast-paced gaming. That same panel also boasts 94% NTSC coverage and wide viewing angles, a balance of features to meet various user needs. While color accuracy has long been sacrificed in favor of better response times, recent advancements has finally allowed manufacturers to offer gamers both. For MSI in particular, this increased color allows them to have better representation and shadow detail.

The mechanical keyboards on MSI’s gaming notebooks, developed with peripherals-maker SteelSeries, are now going to become a full-on lightshow thanks to per-key RGB tech. It’s fairly self-explanatory – users can now program their keyboard to glow differently depending on profiles or situation, such as when health is running low. It isn’t a new concept to the gaming world though it is a first for an integrated keyboard on a notebook. Key travel is measured at 1.9 millimeters for better responsiveness.

Gamers wanting an even more sensitive keyboard can look to MSI notebooks featuring Rapid Response, which keeps the per-key RGB lighting but reduces key actuation to a mere 1.5 millimeters – a hair trigger for most.

All macros, profiles, and configuration are managed and cloud synced via SteelSeries Engine 3.

It may not have an exciting name but MSI makes it abundantly clear that these new integrated speakers are big. Two pairs of speakers and woofers – up to three times larger than others – reside in an massive audio chamber that’s five times larger than usual. It’s a world-first, and they work in concert to deliver more sound and better resonance, backed by the Hi-Res Audio that MSI already supports (and they were the first to do so too, since “audio is often overlooked.”)

There’s no doubting the sheer amount of volume these speakers pump out, which is listed as more than 105 adjusted decibels. The video played on stage was clearly audible from five rows away, all of which is powered by Dynaudio.

How each of these listed features are received ultimately depends on what a user prioritizes. That being said, all of them work to improve a gaming notebook’s video and audio presentation, it’s experience, and its long-term performance. Whatever you’re most excited for, MSI are packing some pretty good upgrades.

While not every product will have sport these new tech, the conference specifically highlighted three lines: the GT75VR Titan, the GE63VR and GE73VR Raider, and lastly the GS63VR and GS73VR Stealth Pro.

As part of the larger range of notebooks, the GT75VR Titan is smaller compared to the GT83VR but is still one hefty machine. It has an arrow-shaped palm rest that doesn’t feel overbearing (during a minute of handling, at least) with the new Rapid Response mechanical keyboard balancing its extremely short actuation with stronger tactile feedback – it’s definitely something to get a feel for before buying, compared to the usual baseline of Cherry MX switches.

The sleeker GE63VR and GE73VR Raider (pictured) hail from MSI’s popular GE series. This time they have a swanking redesign that takes after sports cars, the lid resembling a hood with its raised middle section. They’re available in both 15- and 17-inch versions, running a GeForce GTX 1070 with the ability to Boost overclock. It also has a palm rest of its own, as well as a red-lit USB port.

The new innovations implemented on these notebooks are the Per-Key RGB mechanical keyboard and Cooler Boost 5, as well as the 3ms 120Hz display panel and Giant Speakers – in other words, it’s the poster model for MSI’s next gaming dimension. It may sound like a big machine but the GE73VR didn’t seem any larger or heavier than its features allude to.

Last on the list if the GS63VR (pictured) and GS73VR Stealth Pro. They’re updates to existing products, 15-inch notebooks that are now stuffed with a GeForce GTX 1070, Cooler Boost Trinity (another variant of Coolest Boost tech for smaller machines), and 3ms 120Hz display, all in an ultra slim chassis that’s 17.7 millimeters thick.

That form factor and weight – listed as 1.9 kilograms – will likely make these new GS models an incredibly tempting proposition for most mobile gamers, especially when considering the performance and features on offer.

Stay tuned for a behind-the-scenes look at MSI’s gaming notebooks.

Ade thinks there's nothing quite like a good game and a snug headcrab. He grew up with HIDEO KOJIMA's Metal Gear Solid, lives for RPGs, and is waiting for light guns to make their comeback.
Previous post Umbrella Corp sets up Headquarters in Vietnam. Wait, what?
Next post Gaming notebooks, console-sized PCs, and more – A tour of MSI’s Computex 2017 booth