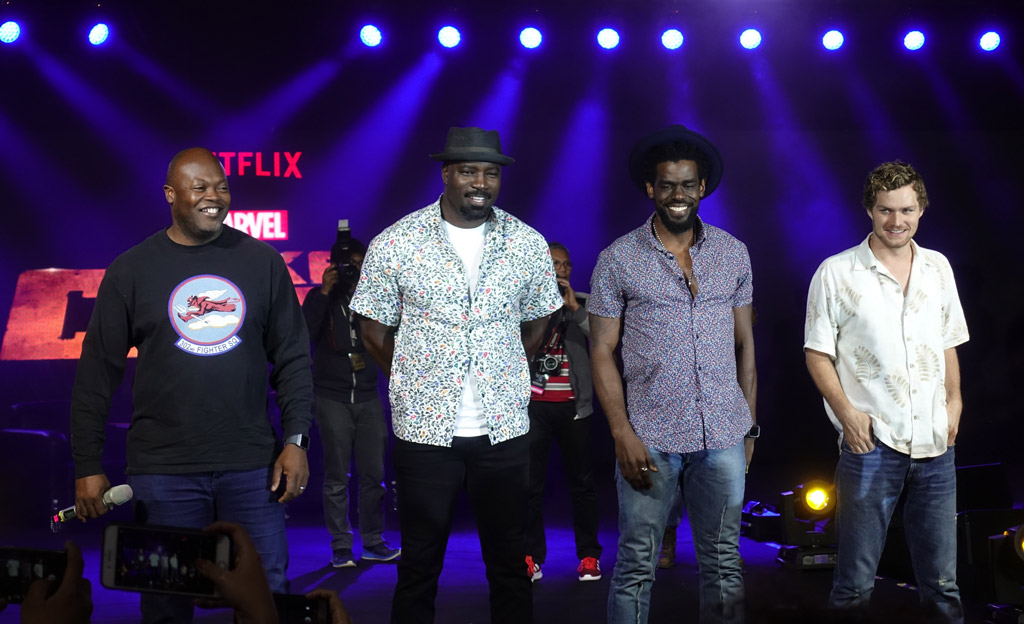 When you think of world premieres or exclusive looks, you usually think of New York Comic Con or San Diego Comic Con. Rarely would you look to your neighbor’s own comic convention. That’s certainly set to change since Manila’s Asia Pop Comic Con last July 27 – 29. And a huge part of it is thanks to Netflix.

Asia Pop Comic Con (APCC) Manila is no longer a stranger to bringing in big stars to the local fans, but it’s been lacking the big announcements and trailers that many craved to see. Last year’s APCC Manila saw the arrival of Stranger Things’ cast, with a panel and poster reveal to complement it. And while that was a moment many fans would never forget, APCC Manila finally had its proper big moment this year, with Netflix on the forefront bringing the cast and showrunners for Marvel’s Luke Cage and Iron Fist, as well as the producers for Godzilla and Castlevania.

Because not only did fans get to hear stories and insights from some of nerd culture’s biggest names, they also got exclusive world premieres from Netflix’s biggest shows of today.

Here are the highlights of Netflix’s Panel from APCC Manila 2018.

Godzilla and Castlevania, the height of anime adaptations

First up are the producers of two of Netflix’s original animes: Godzilla’s Takashi Yoshizawa and Castlevania’s Adi Shankar.

Spoilers to the shows were expectedly off the table, so panel moderator Nico Ramos discussed with Takashi and Adi what it’s like to create anime adaptations of two great classics. What’s common between the two is that both are fans of the respective subjects they worked on and have felt the pressure to build shows worthy of the icons.

Takashi revealed that his first exposure to Japan’s mega monster was Godzilla vs. Biollante back in 1989, when he was 8 years old and that he definitely didn’t even expect to create a show with Godzilla as the main character.

When asked why it has taken so long to bring “two of Japan’s biggest contributions to pop culture” together, Takashi replied that they found that now was the perfect time to do so because of the advancement of animation technology. “There’s been a lot of times when we were asked to do this but CG has finally caught up and the development has been good for the past few years so we finally had the confidence to ensure to make a cool Godzilla, a proper movie that the fans will enjoy,” he said.

For his part Adi’s take on the iconic video game Castlevania was a great hit that got fans clamoring for more than the four episodes of its first season. It’s pretty clear that Adi is a huge fan of Castlevania as he sported the game’s Power Glove on stage.

He shared that his first proper entry into the Castlevania series was with Symphony of the Night, arguably the most successful of the lot. For him, taking on the project was daunting and gave him a sense of responsibility. That being said he’s just as delighted and confident in producing the show, even saying that he feels like he’s transcending into anime’s beloved Goku. “I’m processing the world through nerd culture, and to create an impact on nerd culture is a dream come true,” he said.

Adi did not come to the panel with his Power Gloved hand empty though.

“I grew up between Hong Kong and Singapore, so I’m pretty much a local. And the one thing that bothered me as a fellow nerd was that trailers would drop, news stories would drop. But it would never happen in this part of the world, they would always happen in the US. Right? Like, alien invasions always happen in New York, why? Like, I’m cool with Thanos coming to take over the world but come on, just come here! So I didn’t just come with a little teaser,” he said right before the lights dimmed and so he can share with the fans in the room the world premiere of Castlevania Season 2’s trailer.

And fans cheered on it so hard, he had it play twice.

The panel had on showrunner Cheo Hodari Coker, main star Mike Colter, and main baddie Mustafa Shakir. The trio discussed a myriad of topics with the highlights being Mustafa’s arrival as Bushmaster, and of course Iron Fist’s crossover which had Finn Jones briefly showing up to discuss the moment.

Talking about Bushmaster’s impactful introduction to the show, Cheo shared that Mustafa’s character was built to test Luke Cage. Cheo compared Luke Cage’s new story with Bushmaster to boxing’s Muhammad Ali and Manny Pacquiao. “What I love about Pacquiao and Ali is the fact that they’re not undefeated. It means they’ve pushed it to the limit, and when you push it to the limit, sometimes you’re going to lose, but can you come back? Can you come back as a champion?” Cheo said. He went on to explain that Luke Cage’s new found vulnerability is what makes fans cheer for him more.

On the choice of Mustafa as Bushmaster, Cheo and Mustafa himself spoke about how the audition went and how smoothly Mustafa transitioned into the set. Mustafa shared how he instantly felt Cheo’s support ever since he tried for the role. He revealed that during the testing portion of the audition process, Cheo not only read parts of the script with him in front of the rest of the producer but Cheo also acted out a death scene by literally falling flat on the ground as Mustafa pretends to shoot him. The two highlighted this moment as integral for the entirety of the production of season 2.

And of course, Finn Jones had to show up to talk about Iron Fist’s crossover with Luke Cage. Cheo, much to the surprise of Finn, divulged that the inspiration of the episode all stemmed from Finn’s email to a Marvel executive about  “effortless flow.”

Finn explained that the email he was talking about was an update on how his training was going for season 2 of Iron Fist. “I was talking about doing meditation and also doing martial arts at the same time and what I found was that there was an effortless flow to the dynamic,” he said.

Not just a teaser for Iron Fist Season 2

To wrap up the panel, Finn Jones stuck around the stage to talk about the upcoming season of Iron Fist. He was joined by new showrunner Raven Metzner, known for tv show Sleepy Hollow and film Elektra.

The two mostly talked about a heartwarming experience from meeting up for the first time at San Diego Comic Con (SDCC) last year, to seeing each other again for this year’s SDCC, and teaming up together for the brand new season. This is of course aside from the big surprise that had fans in the room screaming their hearts out.

Raven and Finn recounted to the audience the coincidences he’s had running into Finn. During the an after party from last year’s SDCC, Raven’s son met Finn, already known as the Iron Fist then, and challenged him to a duel on Mortal Kombat. After winning against Finn, Raven’s son introduces the two and they spent hours discussing the future of the show.

They then ran into each other again on their way from the after party to their respective homes. “We stopped for a bit and had another conversation, looked up at this big, giant Defender’s sign, Finn’s up there and I was like, what if one day we’re looking up at the big sign,” Raven said.

Finn excitedly followed up with “… and then last week we were at San Diego Comic Con and I hadn’t seen Raven yet since we finished season 2. And I was at my hotel room and I’ve got this little balcony so I kind of opened my window to the balcony and there’s a pool below it. And I look out at the pool and I see Raven and behind Raven is this massive Iron Fist poster.”

Raven described the moment as a “magic comic con story.”

The two then revealed additional messages from castmates Sacha Dahwan who plays Davos, and Jessica Henwick who plays Colleen Wing, both messages followed up by two special videos. The first of which was the world premiere teaser of Danny Rand wearing the iconic Iron FIst mask, and the second was the entire first episode of the second season of Iron Fist.

The panel ended with a burst of applause and a crowd completely hyped for the return of Iron Fist.

Never talk to Nadine about good games with good narratives. She may never stop talking. Other topics she can't stop talking about: games in general, really, consumer tech, and pop culture.
Previous post Sea of Thieves revisited: as bony as the undead
Next post Review: New Gundam Breaker nails the magic of Gunpla but fumbles combat