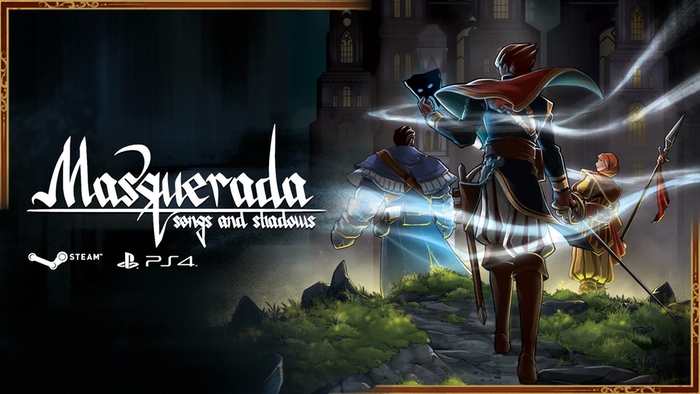 We love random opportunities, especially if they are of the Matthew Mercer kind. Witching Hour Studios, the folks behind the upcoming and much talked-about, Masquerada: Songs and Shadows, gave us an impromptu invitation to their demo kiosk at Sony’s E3 booth to talk to…Matthew Mercer!

I’ll be unabashed about this. Matthew is one of the most honest and hilarious personality in the industry – his animated antics during the 10-odd minutes that I spent with him was infectious. Now, you may not have heard of Mercer. But by the blessings of the gaming gods, you would have heard of his voice at some part of your video gaming life.

Hi Matt! Please give our readers a bit of your background, past projects and your involvement role in Masquarada.

Hello! My name is Matthew Mercer, and I’m a voice actor in Los Angeles, California. I mainly work on cartoons and video games. Recent stuff people will know me from are: McCree in the game Overwatch, many characters in World of Warcraft and…some stuff that I really can’t talk about now! Which is killing me inside!

Of course! Tell us a little more about that.

So, Cicero’s the main protagonist in this series. He’s an individual displaced from society, and was once well-respected and important for his keen, cunning mind for investigation.

He meets lots of curious characters during his journey and He’s very serious from the get-go, but opens up when he meets different people – they call him on his own bullshit and deconstruct his facade that he’s built. The writing in this game is so fantastic, you know. Each character is so fleshed out. For a person like me, who worked on AAA titles and all sorts of range of games, I became super invested because it’s so fun working together on it and working on characters that were so well written.

Also, the Witching Hours guys sat down with us to discuss on where they want the character to go, so it felt more like a collaboration than most other games that I’m used to.

Was there any part during the development phase where you gave your own input to playing Cicero?

As far as the script went, very few alterations were needed. They had a clear picture of what the character has to be. There was a very collaborative feel though, for the presentation of it. There were a few lines where we tried something different, and they were open with that. They were eager to see us take what we were handed and go with it, to see us forge these characters as we went along.

How did this opportunity to work on Masquerada come along?

Like any other video game process, the audition came through my agency. We received them, read it and send it back out, with the hope that they will call us back. This particular game has a very elaborate script with a breakdown of different personality traits like (Matt starts to act animatedly) “soldier guy with gun!” or “aliens are coming!”, there’s a whole lot of variation these days. The scripts are very detailed with a broad range of emotions.

How did you prepare yourself for the role of Cicero, or others that you have voiced for

Cicero is a different characterisation than a lot of characters that I have done before. I tend to fall in the realm of rogue-ish or the badass type. Or the very aggressive type, even. Cicero has a very stern, confident facade on an individual who is still finding himself in the world as it is today. A man out of time from what used to be a comfortable place in society. He’s trying to maintain what people thought would respect and pay attention to.

On top of my vocal workouts, my physicality will change with it. I stand up very straight when I would normally slouch as anyone would, but only when recording as him. This sly, roguish aspect of his voice when he’s in good company, but when he’s with someone he hasn’t met yet, it’s a commanding, a very “you’ll tell me what I need to know now” kind of presentation that came out of the physicality. The script made it easy.

You’ve done many roles and characters. Which one best describes your personality in real life?

Aww man. For me personally? Up until recently, it was Leon Kennedy in Resident Evil. But he’s more of a Boy Scout than I am in some ways. I’m more of a diplomat. He’s more of a man of action. I would say, actually, Cicero.

He has a level of confidence but also an underlying tone of worry and a lack of confidence. He’s been thrown into chaos and things he doesn’t understand, and put into the role of a leader – whether he wants to or not.

I tend to have that happen a lot in my life. So you just have to grin, bear it and hope it works out to it. I felt that I put a lot of myself into Cicero and Cicero into me.

How did you prepare yourself for that role?

Mentally, you break down that character’s personality for yourself. Whether you have the access to the information or not, you create what the characters wants or needs are. What their fears are…

It’s not directly given to you, so you have to decide for yourself when you voice such a character and fill in the gaps. You create a very fleshed out persona for yourself to embody and step into. That way you know how the character should react.

Toughest character? I would say, military games are very physically and mentally exhausting. A lot of screaming for like, hours! I’ve done half a dozen or more Call of Duty games, going “GRENADE!” for four hours. Then you start losing your voice. I’ve also voiced the orcs in the first Shadow of Mordor game, which is fine until it tears you apart after hours on end. It’s very physically-taxing, having to rest for day or two afterwards.

Let’s talk about the industry. Do you think that voice actors get enough of the credits that they deserve – be it in movies or games? What’s the best kind of satisfaction or reward you get?

The best satisfaction we get is seeing the final product. And seeing the presentation meeting or exceeding what we’d hope it will be. And beyond that, the fans’ response. Hearing from those who have played the game and if they were moved by it, appreciating what you brought to it. It’s a big boon for us. Actors like us are creatures of validation because all we do is putting stuff out and saying “do you like it” over and over.

To an extent, you can say I don’t get enough credit, voice actors at least.

Do you think more could be done then?

I think it’s changing a little bit. Because of the nature of social media and gamer culture becoming mainstream culture. That shift is happening for better or for worse. The anonymity of being a voice actor is nice. You can go out in the world and not really be bothered, and conversely it’s nice to be refocused for the work that you do.

I don’t see it ever getting on the same particular level as the mainstream Hollywood actors. I would never want that. But it is nice to know we’re getting to a point where people are able to occasionally recognize us in public and express to us how much our work has meant for them. And we can also tell them how much we appreciate that they have any interest in what we do. I like the way it’s going now. I think it’s changing.

Thank you, Matt. Enjoy the rest of the show!

Have a good one too!

(Ian Gregory, Creative Director at Witching Hour Studios, told us separately, that while there were other voice actors considered for Cicero’s role, he thought Matthew best embodies a sense of earnestness and honesty that Cicero has. The deal to sign Matthew on nearly didn’t happen, but Ian and his team managed to pull it off – and we can’t be happier for that!)

Aaron Yip is an industry veteran with more than 15 years of experience. When not spending time on his gaming PC and consoles, he can be found in Hyrule solving ungodly puzzles and collecting gems.
Previous post Don’t Miss: Campus Game Fest 2016
Next post MSI just announced a crazy, water-cooled, GeForce GTX 1080 card