Home / Breaking News / The livestreaming battle: How Mixer differs from the rest

The livestreaming battle: How Mixer differs from the rest 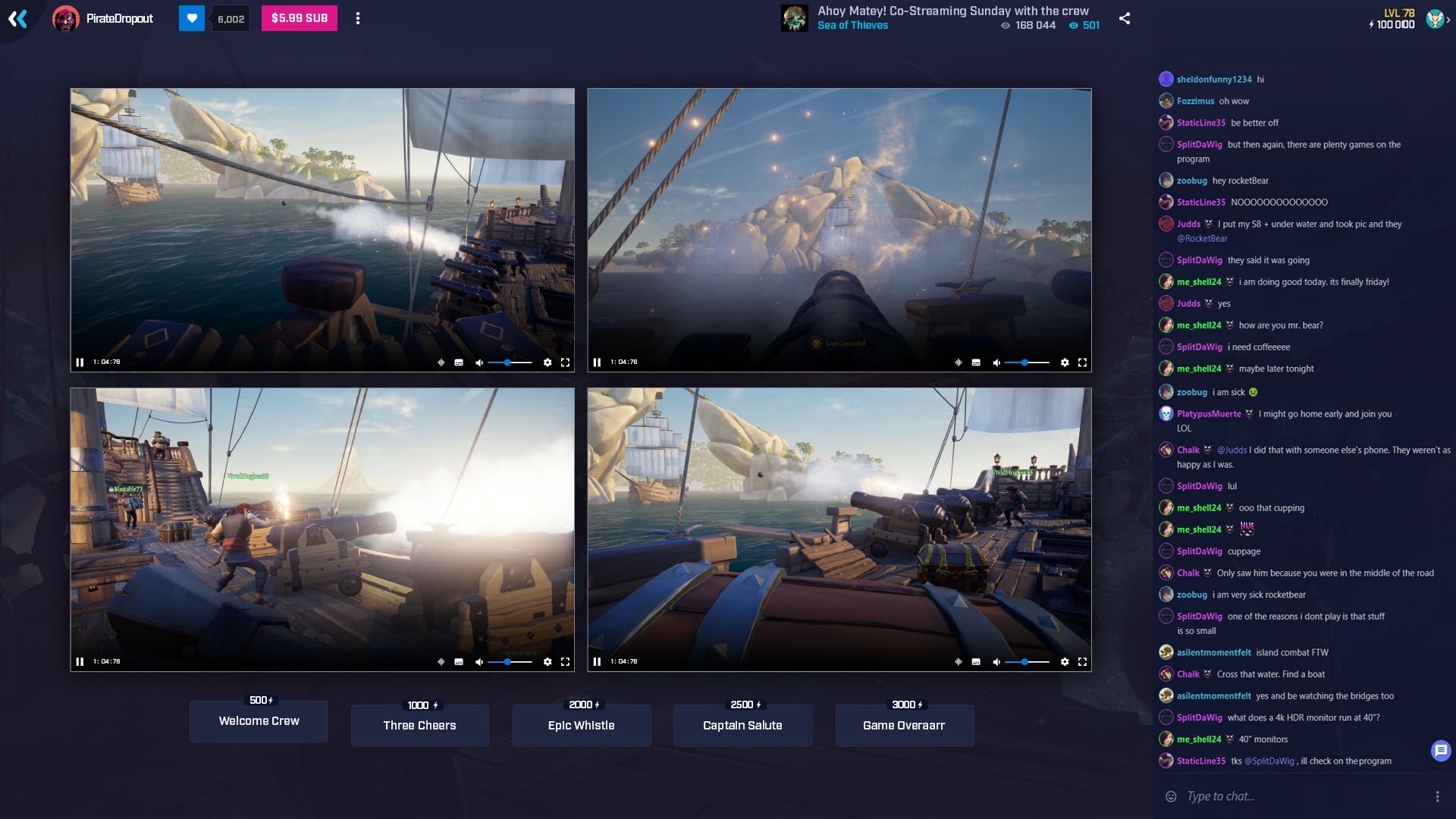 Tackling social is a prime obsession of the games industry and standing at the top is Twitch, head and shoulders above the many competitors spawned in its wake. The livestreaming service drives both regular gaming and esports, exhibiting so much potential that Amazon snatched it from Google’s hands in a billion-dollar exchange. Does Microsoft’s newly christened Mixer have what it takes to challenge this gargantuan beast?

As part of a Microsoft hosted trip, we met with Jenn McCoy at an Xbox Showcase in Sydney earlier this month. The easy-going Director of Mixer Marketing had flown over to provide a close-up walkthrough of the service across console, PC, and mobile, with a mock living room prepared for the presentation. Following pleasantries and a bashful apology over poor Forza skills, our little tour begun.

The team knows they’re entering contested territory. There are plenty of livestreaming options available for consumers right now, across all platforms and for various audiences. Mixer’s approach is to take a step back and address the fundamentals: ease of use.

“We believe that anybody should be able to broadcast their gameplay, whether they want to build up an audience or to just show their friends,” said McCoy. All the capture cards and software-based solutions out there can seem intimidating for someone who suddenly takes an interest, which is where Mixer steps in.

“What we said was, “How do we make it as easy as possible for someone to get started?” And then maybe they graduate to actually wanting the more sophisticated hardware and software, and that’s cool, but we wanted to at least give them that really easy first step.”

It’s as simple as it gets. On Xbox One, bring up the Guide and choose the broadcast icon; on Windows 10, bring up the Game Bar and do the same. Users can go live in less than three clicks, though most will probably tweak things such as the renaming the room title, toggling the camera and microphone on or off, and re-arranging the different on-screen elements.

That’s no different from Twitch or YouTube on PS4, save for Mixer’s ability to rearrange panels, right? Well hold on, we’re just getting started.

Forza Horizon 3 was streaming off an Xbox One S, and McCoy had ushered us to a nearby PC to view that same broadcast. Something seemed strange, and I couldn’t quite figure it out till she explained: there was barely any delay.

“We call that our FTL — Faster Than Light — streaming,” she began, waving an arm in front of the camera to prove her point. “As you can see, there’s less than one second of delay. It’s really important because we want viewers to feel a part of the experience. We don’t want them feeling like they’re always twenty seconds behind what’s happening. We want them to feel like they can react, they can respond to the streamer and have it all feel like a real-time conversation.”

It’s impressive. Plenty of live streaming platforms suffer from some form of delay, which almost always ends up surprising some new streamer or viewer. A great use-case for this would be private or small gameplay sharing sessions, where friends simply want to watch, comment, and react to what’s on-screen (yes, this does happen). Steam and Twitch broadcasting didn’t hold up too well in my experience — the viewers were pointing out things that had already passed, while the player continued living ten seconds in the future. Amusingly, Microsoft’s Mixer was better at VoIP than Microsoft’s Skype.

Still, I had two questions: Is FTL sustainable as the user base grows, and what if streamers want a delay? If we’re talking gaming then the latter is a legitimate countermeasure against stream sniping among popular channels.

“With the built-in broadcasting you can’t [configure the delay],” clarified McCoy. “You can choose if you want to do FTL or a normal latency stream, though. You need a software like OBS [Open Broadcaster Software] to add a few seconds of delay or something like that, so it’s definitely possible. But for the native broadcasting we just wanted to keep it super simple.”

Simplicity and low-latency streaming. So far so good, yet hardly enough to take on Twitch or YouTube Gaming. As if to answer our question, McCoy brought up the next point on her list.

“Now the third thing I want to talk about is interactivity. We have a set of tools available to streamers that let them configure, almost like a dashboard, where viewers can interact with that stream.”

Still on the PC, she brings up the channel browser and hovers over the filter options.

“These are all people that are broadcasting on Mixer right now. I’m going to filter by those who are using interactivity and click on one at random.”

Our unknowing star that day was a person streaming Rockstar’s Grand Theft Auto V. We immediately notice a donation counter in the top left (a trip to PAX) and, as promised, a dashboard with several buttons along the screen’s bottom.

“So these buttons here at the bottom, these are configurable by the streamer. The Mixer toolkit makes it available but the streamer chooses what they say, what they do, what they cost. [Our in-app currency] is called Sparks and you earn two Sparks for every minute that you watch.”

She clicks a button.

“Notice that as soon I do that it’s timing out, so this streamer’s configured a 15-minute cooldown. He wants to make it so people aren’t constantly doing things in his stream, and that’s all completely configurable by the streamer.”

At this point our star seems to react and say something but, alas, we couldn’t hear him.

“People use interactivity for a lot of different things. I would say most streamers use it in a lightweight way. They do things like sound effects or visual effects, maybe play a sound clip or digital file.

“But then some of our streamers use it to do things that are a little more complex, like controlling the physical environment. You could have interactivity control the lighting in the studio or choose between different cameras that are showing. We have one person who uses it to control little robots that go in a maze behind him as he’s streaming — super fun. And then the deepest level of interactivity comes from our game developers. There is an Interactive 2.0 SDK from Mixer available to them.”

McCoy cites Telltale Games and Tripwire Interactive as current examples. The former, crowdsourced story decisions, is a feature we’ve already seen played out on Twitch. For Tripwire’s Killing Floor 2, on the other hand, things sounded a little more interesting.

“You can choose to help or hurt the streamer. If you choose to help, you could give them extra ammo, extra health, help them get out of a tight spot — it’s situationally dependent.

“Now, it’s the internet so many people choose the other option, that is to hurt, and then you get things like… well, there’s one that’s zombie puke and it makes it harder for the streamer to see and fight off zeds.”

Now we’re getting to the juicy bits. It’s fascinating to see how viewer interaction is tackled between different platforms, especially between East and West. How Twitch and YouTube handles things is leagues apart from what Niconico or Showroom does. The thing about Mixer’s interactivity dashboard is that it seems ideal for mobile, desktop, and console, and that unified experience will help greatly when viewers hop between devices. That the tools for setting it up are all in-built, with the flexibility to program advanced commands, means streamers are more likely to experiment and get creative with it.

If there’s one feature that made Mixer stand out during its rebranding in May then it’s the four-person co-streaming. Essentially, it combines up to four separate streams into a single view, mimicking what some streamers do through complicated workarounds.

Calling back to their focus on simplicity, McCoy says that all a streamer needs to do is send an invite, much like a party invite, and Mixer handles the rest. It’s a seamless drop-in drop-out experience, while viewers freely choose an audio source and chat in a combined room.

Unfortunately, this only works from the streaming side of things. A viewer cannot add separate streams to their window, which I figured would have been incredibly helpful during major gaming conventions or esports events.

We were meant to see co-streaming in action but the network at the event started acting up, so we proceeded to wrap things up with some quick-fire questions.

Is Mixer completely free? Yes, though there is a subscription service that viewers can use to support eligible channels. As for revenue, McCoy says it’ll be discussed on a case-by-case basis in the contract. Surprisingly, Sparks cannot be bought, only earned from watching and streaming, so viewers are going to have to grit their teeth and grind away.

Does Mixer work with other platforms? Yes. They’ve already seen users streaming PlayStation 4 and Nintendo Switch games but support isn’t native, that is they’ll need a capture card and OBS, for example. That said, Mixer is “very much open” if these platforms wanted a native app, reflecting Microsoft’s general stance on cross-platform support.

Can Mixer Create, their iOS and Android app, stream mobile games? Yes, and it can do camera broadcasting too.

And perhaps most important of all, how is user acquisition coming along?

“Yeah we’ve seen tremendous growth. We haven’t actually shared publicly our viewership numbers just yet, but we’ve seen a lot of growth, particularly with that integration with Xbox One and Windows 10, and then from some of our big events like E3.”

Not much of an answer but it looks like they’re just not ready to reveal hard figures yet.

As of writing, the largest featured channel I see on Mixer is Monstercat’s 24/7 music stream, followed by Mixer’s own highlight stream, ChannelOne.  Next in line is an interactive stream of PlayerUnknown’s Battlegrounds. They amount to over a thousand viewers in total.

By contrast, the most popular stream on Twitch is (surprise, surprise) a game of PlayerUnknown’s Battlegrounds, only here there are 34 thousand viewers.

At the end of the day, the biggest hurdle Mixer faces is that of any other disruptor: convincing audiences to migrate. And that’s quite the task, as these audiences have already invested time and money into building an audience, a chatroom identity, or – you know it – an emote library. Even YouTube Gaming recently updated their subscription model after Twitch, indicating that things may be rocky on Google’s end.

The way I see it, what Mixer has on their hands is the bridge between basic platforms such as Facebook Live and Instagram, and the more powerful, gaming-dominant option that is Twitch with OBS. It has enough unique features to sustain its own community, though it’s going to take more big names and events to draw attention to the service.

Ade thinks there's nothing quite like a good game and a snug headcrab. He grew up with HIDEO KOJIMA's Metal Gear Solid, lives for RPGs, and is waiting for light guns to make their comeback.
Previous post Code-breaking in the Call of Duty: WWII beta
Next post In Photos – PlayStation Play Everything roadshow