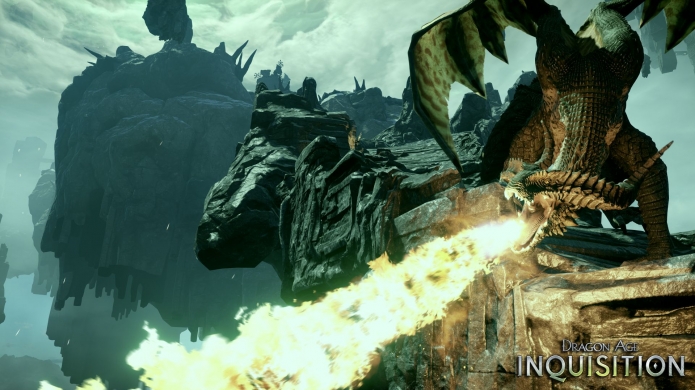 BioWare’s Dragon Age: Inquisition is out today, and while we spoke to Creative Director Mike about bringing Dragon Age to a new console generation, if we wil ever see a follow up to the Warden’s story, and how to deal with thousands of years of fictional mythology and conflicting canon.

GameAxis: What has changed in Dragon Age: Inquisition? How much of Dragon Age: Origins and Dragon Age 2 can we expect to see or not in the game?

Mike Laidlaw: Well, that’s a good question. There are really two big things that have shifted. We’re really trying to do a “best of” for the Dragon Age feeling, because we talked about this as making it the defining Dragon Age experience. That means pulling in the tactical camera from Origins which was only good on PC but not on the console versions.

Putting it on all 5 platforms, which was a fundamental decision from day one, and being able to retain our focus on that has really worked for Dragon Age which makes it kind of unique and stand out. Focusing on the party, party dynamics and interaction, both when you’re engaging in dialogue and when you engage in combat. You’ve got four characters direct under control the way you go.

Those are the things that I think are really critical to keeping it feeling it like Dragon Age, but our opportunity was when we moved to Frostbite, the new engine. It was like “oh wow, we need to retool a lot of stuff” but it was an engine that was used to make jet fighters fight over the top of tanks, fight over top of guys and we were like “well we could do big spaces right?” We could actually go back to exploration and in Origins I think we wanted that feeling but the engine could never quite match it.

With Inquisition, we’re letting you set a few of your own objectives to pursue your own goals and basically be able to crest the bridge and go “hey, what’s that thing down there? I wanna find out..” and that sense of discovery is just so much better.

GaX: How big is the world when compared to Dragon Age Origins and 2? Is it bigger than the two combined?

ML: You can take the whole of Dragon Age Origins and the Hinterlands that you’ve played earlier in Inquisition, and Origins will fit, all of it into the Hinterlands region – and there are many more of such regions. The game is a multi-regional open world, it’s not like one big space. But if you travel you will come across places which are full of demons or may be a desert. They all have a distinct feel. So yes, if you can fit one game in one of the levels, we can fit of two of them with no problem in Inquisition.

GaX: Has it been difficult to work with the narrative in an open-world game that allows such diversity in characters

ML: It’s immensely hard, but less so when you keep your theme in mind. Our game has themes of leadership and discovery, and to some extent, faith. All those things come together. Leadership comes back to the Inquisition, which is a beautiful wrapper that makes things relevant.

If you’re doing something, something interesting has to happen to blow your mind. Our designs had to be purposeful; otherwise, things would feel pointless. You spread the Inquisition’s influence by discovering landmarks…it’s like the newest XCOM reboot. Everything you do was to fight the aliens. Everything was purposeful. That’s what we’ve aimed to do.

GaX: Let’s talk about fans and feedback of the past Dragon Age games. Bioware has been quite big on it lately, but I also feel there’s always a danger of listening too much. Mass Effect 3’s ending remake is a good example of that. So how do you find the balance to what makes sense listening and what isn’t?

The way I tend to look at it is that you can never do everything that everybody wants, because most of the things in that pool contradict the other things in that pool. As such, my approach to it is to go back to first principles. So be willing to admit your mistakes. Stay humble. That’s something Ray and Greg seared into our DNA, and those are two of the humblest guys you will ever meet who are still, incredibly, somewhat surprised by their success. And yet they’re absolute geniuses.

A litmus test I try to use is just to ask if I had to explain this to the fans, could I do so concisely and clearly and in a manner that would leave even those who don’t agree saying that they get it? That’s how you know you’re not fooling yourself. Again, you can’t ever please everybody but you can give it a whirl.

GaX: Can you share with us how Inquisition will make use of the integrated social and media sharing features of the Xbox One and PlayStation 4?

ML: Yeah, players definitely have a lot more opportunities to share now, and we’ll see people uploading those key moments instead of “here’s the part where I spoil the story!” Some people will do that, but I think they’ll get no views. I think what will actually become interesting is people going “I found something cool over here” or “Cassandra said something that makes me go whoa!” Just these little 45 second things that make viewers think “well, I never saw that when I went there!” or “I didn’t even know you could go to that area!” I think that’s what those sharing features will actually enable.

GaX: Inquisition is the third main game now, and you have millennia of history in the Dragon Age world. How do you keep that straight amongst yourselves, particularly when story paths can branch off?

ML: So one of our editors is someone we brought on initially as a contractor and then hired full-time because he’s fantastic. He is a research specialist and was a crime reporter with the Edmonton newspaper. He’s very dedicated and very thorough, because crime isn’t something you want to mis-report. And what he’d do is comb through everything in Origins, everything in the novels, everything in Dawn of the Seeker, the comics, all the different products.

We’ve developed this internal wiki that tracks the states of all the characters. There are various fields for the characters: Dead, Alive, and Quantum, for characters like Alistair who may or may not be alive depending on player choice. Within the entry, it explicitly says “If Dead: This. If Alive: This”. So we have that as our internal reference, and while the fans maintain a really good one, they can’t put notes about what’s coming, so we have to have our own.

That helped us organise things because there are a lot of products. We’ve announced our fifth novel, there are four out at the moment and a lot of the characters from the novels get referenced in Inquisition. The script-writing team will go and reference that. Being able to copy a noteworthy paragraph from a book that describes a location and then send it to a concept artist when they start to draw it for the game, that’s invaluable. That’s how we keep it all on track.

GaX: So we know that all three Dragon Age games are really separate stories, not true sequels to one or the other. Would it be fair to say we could expect a proper sequel to, say Origins, that continues the Warden’s storyline?

ML: Well it certainly is possible but, the biggest hurdle to overcome, if we ever do one of these sequels,  IF [laughs], is that when you release a game that says, this is the epic conclusion to Dragon Age: Origins is that suddenly 30 to 40 percent of your players will go, ‘well I can’t play that because my Warden’s dead in Origin’. And his or her story is done. So you could have a big memorial (ending) in that game, but then as a separate game from one where the Warden is alive would sort of make the Warden character quantum.

We talked about balance earlier, and I don’t know if a definite sequel to Origins would work but that said, could we continue to explore that story for the Warden? We can. So cautiously, maybe but probably not as a full release to my best guess.

Aaron Yip is an industry veteran with more than 15 years of experience. When not spending time on his gaming PC and consoles, he can be found in Hyrule solving ungodly puzzles and collecting gems.
Previous post Mac Owners Can Get Their RPG Fix with Divinity: Original Sin
Next post Official Halo 2 Plasma Rifle Now For Sale