Horizon: Zero Dawn lets you hack nearly every machine in the game 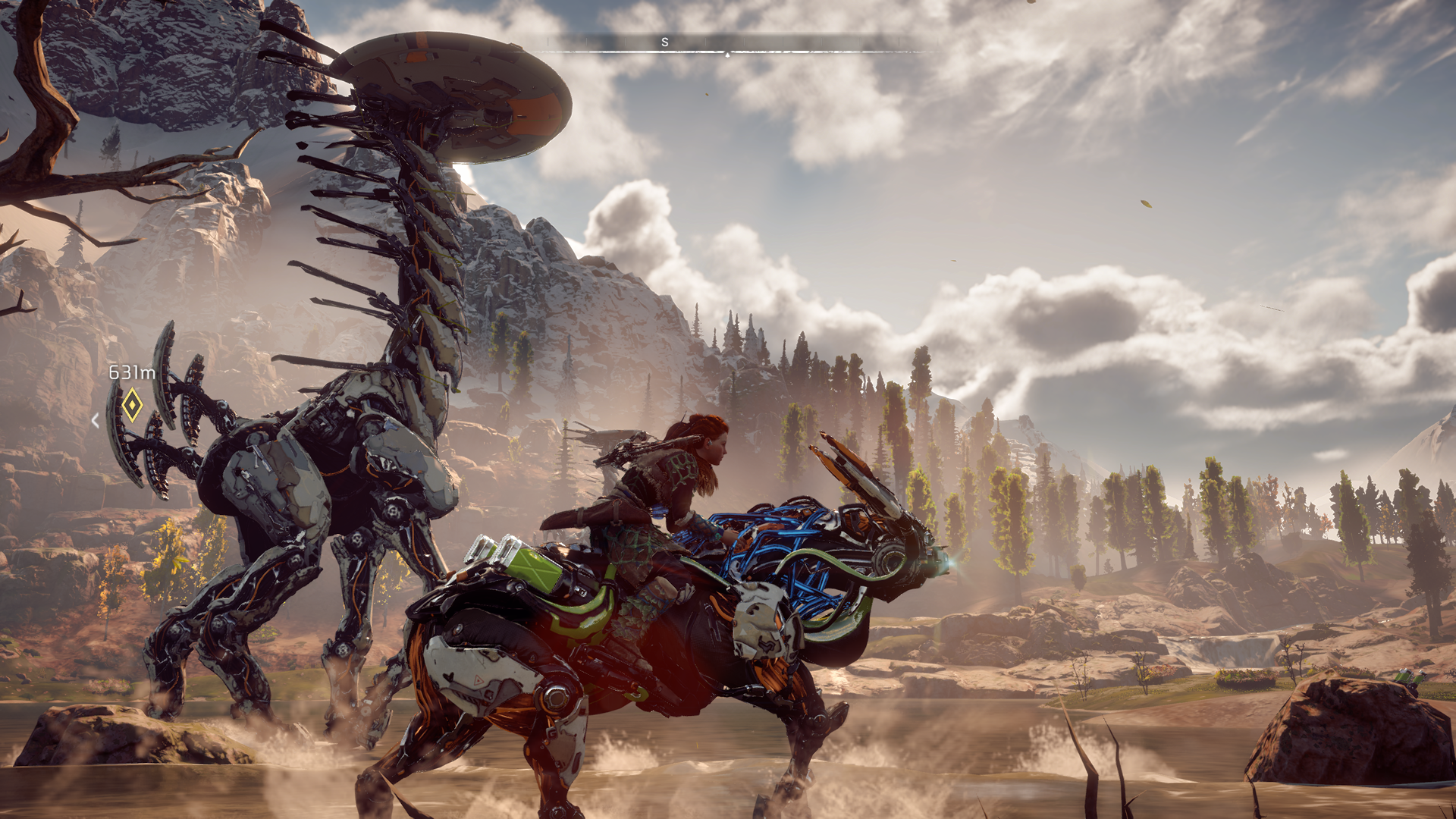 E3 2016: When Horizon: Zero Dawn releases for the PlayStation 4 in 2017, players will be able to do more than just destroy or steal from robot dinosaurs – they’ll be able to use them.

While the latest E3 trailer showed Aloy converting a Broadhead into a mount, developers Guerrilla Games have confirmed in a hands-off session that nearly all of the machines in the game can be hacked for one purpose or another. And yes, that includes the massive, heavily-armed T-Rex first shown during the game’s announcement.

Speaking to Lead Quest Designer David Ford and Art Director Jan Van Beek, we were told that the only machines exempted from hacking were a “select few” for narrative purposes. Not all machines will be turned into mounts, of course, and some can only turn friendly for a limited time, but players committed enough to do so will be rewarded for their efforts.

Finding out how each machine reacts will be for both Aloy and the player to discover. The journey begins just as our protagonist ventures beyond her home for the very first time, seeking to find out more about the corruption, the machines, and how all these pieces fit together; in other words, we’ll be learning what happened to civilization a thousand years ago.

Touching on the backstory a little, Van Beek explains that tribes and machines have lived peacefully together for generations. The latter has formed an ecosystem that, unlike animals, do not require killing one another. As if on cue, a rabbit hops across the demo screen to highlight that regular animals still exist.

We then learn that Horizon: Zero Dawn’s scenic landscape is based on a real-world location, although the duo were coy on stating exactly where – “let the players find that one out.” Their smiles grew even bigger when asked if we’ll ever run into ruined cities or even androids, saying we’ll just have to play to find out.

While they didn’t want to comment on gameplay length, they did say that players will be busy with a large number of skills, quests, activities, and customization options early on. The E3 2016 gameplay demo takes place when Aloy is roughly level 12, with most of her abilities on display tied to a skill-points system that we, unfortunately, did not get to see.

What’s interesting, however, is Horizon: Zero Dawn’s description as “primarily single-player.” Given Guerilla’s familiarity with multiplayer thanks to the Killzone franchise, we wondered if they had similar plans here. Van Beek says that we “might” get to see one, seeing how this was their most ambitious project yet – crafting something new on this scale has proven extremely challenging for the team.

Fortunately, their position as a first-party studio has allowed them to create a game that looks, sounds, and plays incredibly well. E3 attendees were offered a brief hands-on session that, while extremely restrictive, showed off how good the core mechanics are.

Unlike Killzone, a standard first-person shooter that mostly served as a technical showcase, Horizon: Zero Dawn has players learning and mastering new concepts.

Aloy’s bow loadout calls for patience and skill, as arrows are a crafted resource and each machine type is a unique encounter on their own. Tactics required for the agile, raptor-like Watchers were very much different than the bullish Broadheads, calling for different engagement distances, target zones, and evasive plans.

Pushing down the right analog stick slows down time, which helps not only with the controller aiming but affords the player some time to think. Other than making the first strike, Aloy rarely has the chance to stand still in combat; she’s constantly running and rolling to take on enemies that are clearly tougher than she is. It isn’t exactly hard per se (is anything truly hard after Dark Souls?) but it certainly feels action-packed.

Amping up the skill factor are each machine type’s weak point. They’re the new headshot, only tougher due to the all the animalistic leaping, bucking, and charging that goes on. A detail that thrilled me was that damage was modular on these smaller machines too – my first, unplanned meeting with a Watcher had me frantically shooting off armor plates in an attempt to hit its glowing head.

These aren’t exactly new ideas to someone who plays Capcom’s Monster Hunter but Horizon: Zero Dawn gives the genre the AAA treatment, with a fascinatingly curious world and a control system designed for actual human hands.

What’s great about it is that once the fever pitch of combat dies down, the world returns to being a serene, calming vista – the wind caressing the high grass, robot dinosaurs strolling in the distance, and the soothing blend of diegetic music and soundtrack all pulls the beauty of nature into focus.

Compared to the ash-swept industrial zones of the Helghan empire, this is one adventure you wouldn’t want to miss.

Ade thinks there's nothing quite like a good game and a snug headcrab. He grew up with HIDEO KOJIMA's Metal Gear Solid, lives for RPGs, and is waiting for light guns to make their comeback.
Previous post ReCore isn’t a Megaman-like game, and that’s ok
Next post Forza Horizon 3 will be the most social racing game yet