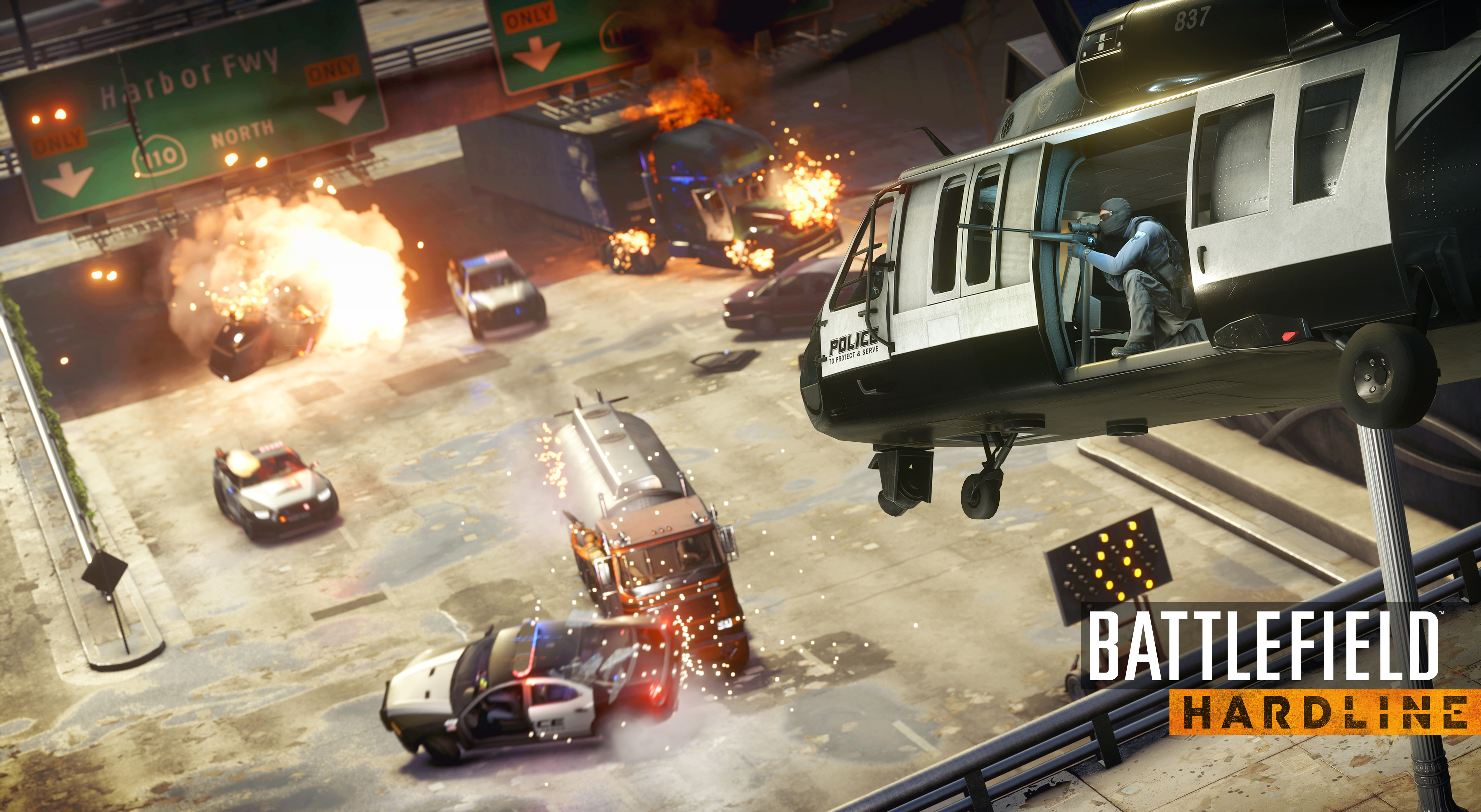 When EA first announced Battlefield Hardline, you would be forgiven for being skeptical of the game. Battlefield 4 was barely eight months old and had been plagued with problems, ironically mostly online server and login related issues too. Yet here was EA trying to sell a new Battlefield game, and replaced soldiers with cops and criminals – a decision that has divided opinions last year’s E3.

Initially set for a late 2014 release the game was eventually delayed, giving developers Visceral Games – taking the reins from DICE – some time to refocus their spin-off into something more individual. Visceral are clearly striving to provide something different from the militarised Battlefield, and in many ways they have succeeded, on an obvious surface level, but also in smaller ways.

During my play-through at the event, I felt what really differentiates Hardline from other shooters (and even from other Battlefields, despite their own reputation in this field) are the vehicles, which are accessible, numerous, and easy to handle. This is because “speed”, along with “story” and “strategy” are the core design pillars of Hardline, according to senior producer Scott Probst.

“This is the fastest Battlefield yet,” he added.

I’ve haven’t had the chance to give the game’s single-player mode this time, but if my 3-hour long matches on the game’s multiplayer modes were anything to go by, Probst’ emphasis on the game’s “speed” was quite evident. Three modes – Hotwire, Conquest and Heist – were available for me to play here, on three maps: Downtown, Dust Bowl, and Bank Job. Hotwire and Conquest can only be played on the first two maps, while Heist can only be played on Bank Job.

Let’s take a look at what they are like.

Hotwire Mode
Hotwire is a blast and arguably my favorite mode yet. Across the map are five vehicles that each team is competing to control. These act in much the same way as classic Battlefield capture points but must be driven at speed for the capture to start depleting your opponents’ reserve of lives.

The ensuing chaos feels fresh for the series, and clearly adheres to one of the three S’s Visceral told us have been at the core of their development. Hardline does indeed feels like a faster game than previous entries in the series, and that fits the cops and criminals feel. Increasing the gains for going faster and sharing captured vehicles with teammates also helps steer the gameplay toward its intended vehicular warfare. The maps also ensure that players can’t make progress away from the action.

If there’s a problem, it’s the car handling. Battlefield has always prided itself on its vehicles, but the handling of a muscle car differs greatly to that of a heavy duty infantry carrier. At the top speeds these mechanics are put under some strain and can come unstuck on occasion.

Heist Mode
Heist meanwhile is a focused asymmetric mode tasking criminals with cracking a vault before attempting their escape as the police aim to stop them. Deliberately and obviously evoking the famous shoot out scene in Michael Mann’s Heat, the majority of Heist’s action takes place in its final stage as the police aim to protect the criminal’s escape routes and deplete their numbers.

The map itself was clearly designed for this mode in particular, and offers plenty of variation, with players able to attack the vault from multiple angles, and the two escape points (where the vault’s cash must be taken) splitting the action nicely.

In practice however, it felt all too easy for the police to win through sheer stubbornness. With an unlimited amount of lives behind them there was little need for tactical thought when simply swarming the problem would be enough. Visceral would need to balance this mode somehow before the game’s launch in March.

Speed, Speed, Speed
Visceral’s efforts to differentiate the game go further than new, speedier modes. Feedback from the first beta last year led to the developers creating initial load-outs with a focus on lighter weaponry, more in keeping with what the police might use in the real world.

Heavy weapons aren’t gone completely, instead they come as drops on the map to be fought over. Other changes are smaller: squad commanders are now “hackers” who are able to influence the map in new ways, and taking someone down with a melee kill now makes it possible to interrogate them, which reveals enemy locations.

A new upgrade system also uses cash as currency and allows players to select which weapons they wish to add to their arsenal rather than unlocking them in a set order. Such choice should be mandatory.

EA’s so-called levolution moments also returns. Introduced in Battlefield 4, these are events that change the map in some large way and can be game changers. In Hardline’s Downtown map for instance, certain roads can be bombed and sunk in to allow for ambushes. Then in Dustbowl, sand storms appear at random that drastically reduce visibility – forcing players to engage in a bit of hide-and-seek and close quarter combat.

The 2 Cents
It’s easy to remain skeptical about Hardline and EA’s sketchy track record with game launches (SimCity, Battlefield 4 and even Dragon Age: Inquisition) isn’t helping it either. But on the evidence of this beta, it’s clear that Visceral have something special up their sleeves and it does leave one wondering if Hardline being a brand new fresh IP rather than one that takes the legacy of past Battlefield games on its back would have given it fairer dues. The three new modes I’ve seen provide an interesting, more playful take on the Battlefield formula without changing things drastically. Hardline is a spin-off after all, not a reboot.

Now, let’s hope Hardline’s single-player proves to be as robust its multiplayer mode. Then Visceral’s would have succeeded in making Hardline the individual and proud cousin of DICE’s main game, and in the process grow back gamers’ goodwill for the franchise.

Aaron Yip is an industry veteran with more than 15 years of experience. When not spending time on his gaming PC and consoles, he can be found in Hyrule solving ungodly puzzles and collecting gems.
Previous post App Assessment: Battleheart Legacy (An)
Next post Sony Online Entertainment Sold Off, Can Now Go Multi-Platform