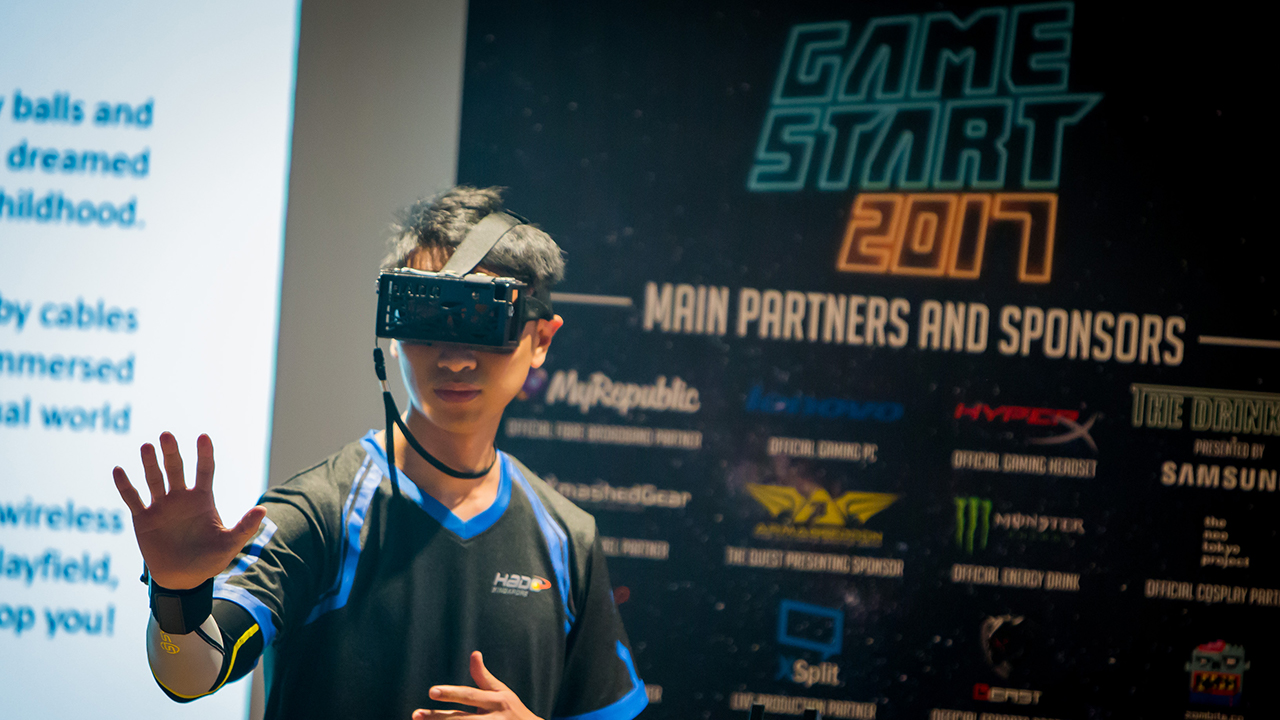 An enduring highlight of the annual GameStart convention are the booths for local independent developers. It’s a rare chance for developers and players to meet, a visible barometer for the industry’s progress, and this year twelve games have made the list.

Organized by the International Game Developers Association of Singapore (IGDA) and supported by the Infocomm Media Development Authority (IMDA), the Singapore Games Pavilion will be one of the first few booths attendees see upon entering – it’s at G24, right by the main stage and directly across from Bandai Namco Entertainment.

The twelve featured games are by studios new and familiar to the convention. Most of them hail from PIXEL Studios, a collaborative space launched by IMDA in 2016 for content creators and game developers.

“The local games industry has come some ways over the years, and we can see that with the quality of games being produced. Iconic indie titles like Rocketbirds, Masquerada, and Stifled have shown global appeal, and bodes well for the Made-in-Singapore brand,” said Allan Simonsen, president of IGDA Singapore, in a statement.

Here’s a rundown of the featured games and the teams behind them, in alphabetical order. We’ll be returning with our hands-on impressions tomorrow, the convention’s first business day.

“A mobile strategy game that leans heavily into the strength of mobile gaming – by placing a heavy focus on guilds and the social aspect of gaming.”

“In Buglords, Botanical Bugs form symbiotic relationships with their plants. The plant on the bug’s back relies on the creature to propagate and protect its species. In return, the plant supplies the bug with an intense energy it can channel from fertile soil through root-like funnels that attach to the creature’s abdomen.”

Ratloop Asia is the Singapore-based studio spun from the now-dormant Ratloop in USA. They were initially formed to work on the Rocketbirds games for PC and PlayStation hardware, and their co-op experience may be paying off here as BugLords supports up to four players.

“A 2D Open World RPG set in the fantastic and wonderful world of cats! Play as a cat-venturer as you explore a massive continent crafted in the unique style of tapestry! Relive the good old days of exploring an overworld map as you raid dungeons for epic loot, complete quests and meet the many furry denizens of this world.”

Hot off the success of Slashy Hero, The Gentlebros are back to prey on our nostalgia and weakness for furry felines. Before going full-time, the three co-founders worked at Koei Tecmo Singapore before scoring their big break with Slashy Hero via Kongregate.

a 2D Action Brawler
by PD Design Studio
for PC, PlayStation 4, Xbox One, and Nintendo Switch
in Q1 2018

“When the occurrence of the dark moons began, Dusty, Darg and Kitsune knew that something is amiss. An ancient evil from a faraway land threatens the peace of Double Bill Town. Prompted by a visit from the helpless Elijah, the trio set off to seek the Iron Knight’s help. Along the way, they must battle rogue villains, encounter ancient powers and face the battle of their lives.”

PD Design Studio have been around since 2006 as a multimedia studio, only leaping to video games in 2013 with Dusty Revenge. They’ve also gained online fame for FFVII: Re-Imagined, a short fan-made game in the style of classic beat-em-ups.

a RPG
by Cheong Mun Chun
for TBA

“This prototype RPG prides itself with its unique mechanics, integrating the levelling up and linear storyline of RPGs with the robust and dynamic combat system of a fighting game. The concept was born out of the idea to introduce casual gamers to the fighting game genre, while also providing a new experience to fans of fighting game titles.”

a RPG
by Witching Hour Studios
out now for PC (Win/Mac), PlayStation 4, and Xbox One
in development for Nintendo Switch

“In the turmoil-ridden Citte della Ombre, religion holds no sway. Only the songs sung of one’s deeds will carry an Ombrian’s legacy beyond death. Those who hold even the smallest morsel of power will make every effort to ensure their songs live on. Enter the Mascherines – masks from an ancient time that allow its wielders to channel the elements into destructive magic.”

Witching Hour Studios forged a reputation for story and strategy with the Ravenmark series on mobile. Masquerada represents their foray into PC and consoles at large, regarded as an ambassadorial game of sorts for Singapore. They’re also the only local studio thus far to have a cast of renowned voice actors in their game.

“An RTS-MOBA game where the player utilises a group of heroes, and even teaming up with his friends, to defeat impossible bosses. Inspired by the original custom map “Impossible Bosses” by Psyris and many other MMO raidbosses, each boss is a unique, challenging encounter and has their own signature abilities.”

Edwin Fan aka X0to1 is a one-man developer whose primary strength is programming. His love for Blizzard Entertainment’s RTS games as well as its huge mod community led him to NEO Impossible Bosses, a project he started after gaining some work experience in the games industry.

“A mobile and PC 2D puzzle-action game set in a stylised world. The game utilises a unique drawing mechanic that allows players to plan and guide the characters Huey and Satura across beautiful but dangerous landscapes as they embark on a journey to help Satura regain her memories while recolouring their world.”

Born from the 2015 Game Innovation Program, the team of five first came together for Re:Colour, a project that brimmed with enough potential to receive seed funding for further development. It has since been renamed to NOIRO, picked up by the famous indie publisher Devolver Digital.

“A sound-based stealth thriller, where sound is the only way you see and the enemies hear your fear. The sounds made by your in-game character and yourself through microphone input reveal the otherwise hidden world through ‘echolocation’. However, undue noise will attract the attention of creatures lurking in the darkness. To survive, you will have to tread the line between making sounds to see, and staying quiet to stay hidden.”

Before Gattai Games there was a group of Digipen Singapore students who caught attention for Lurking, a project that would go on to win awards and seed the idea for Stifled. The studio has since been busy juggling development and promoting the game across the world.

a VR Action RPG
by Kaiju Den
for PlayStation VR, Vive, and Oculus Rift
in Early 2018

“A virtual-reality game where players take the role of a hunter as they look to hunt flying monsters. Players are able to customize their crew and ship as well as team up with their buddies to hunt or simply explore a beautiful world in virtual reality.”

The studio was founded in 2016 after a decisive meeting in a Kaiju-themed yakitori restaurant. The VR enthusiasts debuted with Lunar Eclipse, which drew its scares-laden inspiration from Hong Kong cinema, and are now turning their attention to Japanese influences for their next tite.

a Pixel Art Musical Adventure
by Joysteak Studios
for TBA

“A 2D musical adventure game depicting the tale of a young bird named Birb as he leaves the safety of his nest to confront the outside world and discover his true identity. Along the way, he encounters other feathery denizens and learns the language of the forest, ultimately unveiling his destiny.”

The three-person JoySteak Studios formed earlier this year, fresh out of graduation, to develop Songbird Symphony. Their history together traces back to the 2015 Game Innovation Program, for which they were all interns.

a Living Miniatures game
out TBA

“A table-top-miniatures game and board game hybrid that takes place in a fast changing 3D Tactical Space right over the table. In this first instalment, the action takes place in the South China Sky, where the Dynastic naval armada is facing off against the combined fleets of the Singasari League to exert supremacy over strategic islands and control rich trade routes plying exotic goods.”

The team behind this Kickstarter success are largely from Playware Studios, a long-running game developer predominantly focused on educational projects. As such, they used the tools and experience they had towards the design and balance Avertigos, turning to Asia’s own rich history for the steampunk setting.

GameStart 2017 runs this weekend, 14 and 15 October, at the Suntec Convention Centre.

Ade thinks there's nothing quite like a good game and a snug headcrab. He grew up with HIDEO KOJIMA's Metal Gear Solid, lives for RPGs, and is waiting for light guns to make their comeback.
Previous post Impressions – The Samsung Portable SSD T5 is your best portable storage companion yet
Next post Hunt or be hunted in the new Lords Mobile event