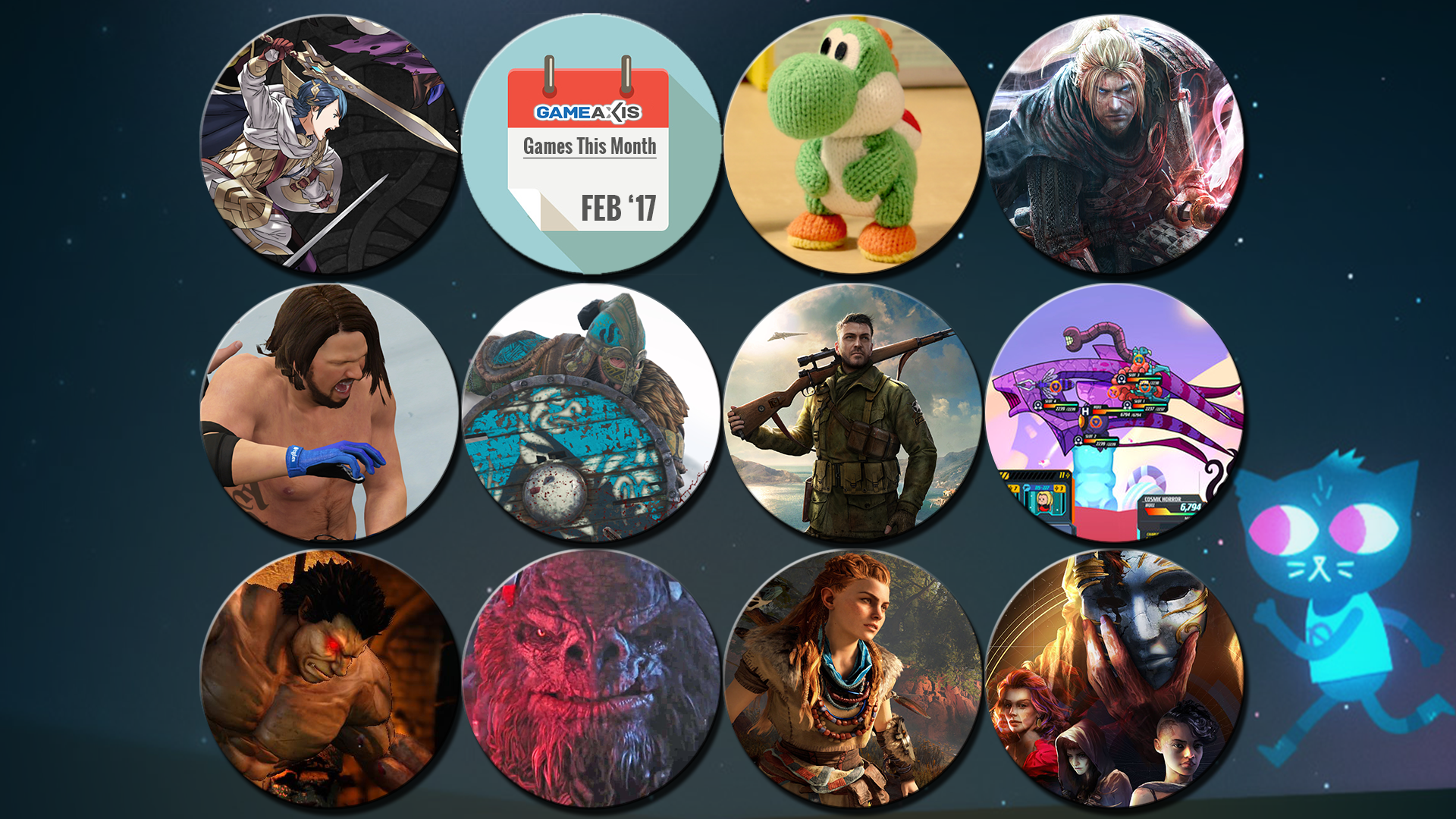 Some of us are probably still busy with last month’s releases, considering the sheer amount of Japanese RPGs. If January’s line-up didn’t stoke your fires, however, then perhaps this month’s will. February 2017 is serving up a healthy spread of genres across various platforms so, one way or another, there’s going to be something for everyone.

What Is It?
A free-to-play spin-off of the popular Fire Emblem series, revealed last year as part of Nintendo’s entry into mobile gaming. Unsurprisingly, it doesn’t stray far from Japanese trends when it comes to mobile RPGs, which is basically random hero summoning, party development, back-to-back events, and a reliance on traits that defined the series. In this case, it’s the characters and grid-based combat.

Fans will be happy to know that Nintendo didn’t spare any expense when it comes to presentation, be it the visuals, sound, or voice acting. Fire Emblem Heroes features an original story too, but don’t hold high expectations. As with any mobage, launch month is the best time to hop on board due to all the giveaways and promotions.

Who Should Get It?
Fire Emblem fans will certainly get a kick from the nostalgia alone. That being said, the tactical combat (formations, classes, etc.) holds up very well on touchscreens, meriting a recommendation even if you’re new to the series. Gacha veterans won’t find anything that’s particularly new here, other than a well-produced title to sink their time and money in.

Shares Similarities With
Phantom of the Kill

What Is It?
An adorable platformer set in a yarn-filled world, starring a knitted Yoshi and Poochy. It’s a near-faithful remake of the Wii U version which released in 2015, retaining all of the levels and creative path-finding options available to players. Tragically, its reputation as a great co-op game doesn’t apply to the 3DS port due to the absent multiplayer.

To make up for it, they’ve added a bonus Poochy Dash mode as well as Poochy-Pup sidekicks, with a Yoshi Theater for a bunch of stop-motion animations. Poochy & Yoshi’s Wooly World also comes with greater Amiibo support.

Who Should Get It?
Avid platform gamers and anybody wanting a little color and creativity for their Nintendo 3DS. There’s a free demo on the eShop for anyone curious.

What Is It?
A punishing action game that blends Ninja Gaiden with “Soulsborne” and Diablo elements, boasting great technical depth in terms of both gameplay (multiple stances) and performance (different graphic presets). Players take on the role of a Western Samurai in Sengoku-era Japan as they battle humans and demons alike, utilizing weapons that range from the conventional to the supernatural.

Nioh has received plenty of attention in its lead up to release, from the developer’s open and honest approach to beta testing to the game’s capability as a Soulsborne successor. Interestingly, the game’s roots trace back over a decade ago, undergoing development hell before it passed into Team Ninja’s hands.

Who Should Get It?
Masochists and those craving a challenge. Don’t let the steep learning curve deter you, as the game has a great co-op system and the ability to “over-level” an area by virtue of equipment drops.

What Is It?
The latest entry in 2K’s professional wrestling series, now available on PC (the game released on consoles in October 2016). In keeping with the sports genre, WWE2K17 improves upon past iterations by having a larger roster, more animations, and a revamped promotion mechanic that better simulates the drama and excitement of professional wrestling.

Fun features such as backstage brawling make a return, even allowing you to move to the arena if you so desire. As expected, there are plenty of modes and customization to indulge in, including player-made title tournaments.

Who Should Get It?
Pro wrestling fans who can accept the genre’s current slant towards simulation.

What Is It?
An action fighting game pitting Vikings, samurai, and knights against one another. While there is a campaign mode, the bulk of For Honor‘s appeal lies in its persistent online warfare, tallying victories and defeats for all three sides to determine overall map control. Players may only pledge allegiance for one faction but are free to use heroes from any of the three.

Despite the triple-threat rivalry, matches are only between two teams and may comprise any combination of heroes. The battles themselves are small in scale, with AI grunts involved in the melee, but what shines most is the game’s fighting system (there is a learning curve), complete with feints, cancels, and other advanced techniques.

Who Should Get It?
Anybody interested in action and fighting games – there’s plenty of appeal from both historical fantasy and eSports angles. An open beta is currently live at the time of publication, although a point of contention is the peer-to-peer matchmaking.

What Is It?
If you prefer dispatching enemies from a distance then perhaps this tactics-oriented shooter would help. The Sniper Elite series may have gotten popular for its gory X-ray kill-cams but Rebellion has been taking development seriously, this time improving AI behavior, player mobility, gameplay mechanics, and even increasing map size.

Sniper Elite 4 takes place across various locations across Italy in 1943. Player character Karl Fairburne joins the local resistance as they set in motion the events that would lead to the Battle of Normandy, the D-Day landings, and more.

Who Should Get It?
Fans of tactical shooters and stealth, as well as World War II buffs. Gamers looking for co-op opportunities should keep an eye on the game too. What Is It?
A management game steeped in sci-fi and adventure, flinging anthropomorphic spuds to the far reaches of space. The sequel builds upon feedback from the first game, adding combat and other activities for a more engaging player experience. Given the new setting, the management aspect now falls to all matters related to ship and crew.

A big part of We’re In Space?! deals with exploration, taking potatoes to hundreds of procedurally generated planets for all manner of resources. They’ll get to establish contact with whole new races along the way, from leafy greens to starchy tubers.

Who Should Get It?
Folks who enjoy light management games and the FTL: Faster Than Light gameplay loop. Besides, who doesn’t enjoy potatoes?

Berserk and the Band of the Hawk

What Is It?
A Musou-style (aka Dynasty Warriors) take on the ‘Berserk’ manga series, specifically the story arcs between The Golden Age and Hawk of the Millennium Empire, making for a ton of variety in terms of tone and content. It includes footage from the movie trilogy as well as new scenes that portray more interaction between characters.

True to the genre, there will be a diverse selection of heroes to choose from, which includes the various styles of armor Guts wears throughout the story. They even brought back the Japanese voice actors from the movies and the recent anime series, although fans are probably going to sigh at the latter.

Who Should Get It?
Primarily Berserk “strugglers” due to the simple hack-and-slash gameplay. These Musou adaptations usually do a better job targeting fans than complete newcomers to the IP (the trailer is full of spoilers), but we’ll have to see if this does justice to its source material.

Shares Similarities With
The many Musou games out there

What Is It?
The next installment of the console RTS, set to launch simultaneously on PC. Halo Wars 2 is a direct sequel to 2009’s original, with a novice-friendly story that ties in directly to the main games. To ensure they get the genre right, 343i collaborated with industry veterans Creative Assembly since the very start of development.

Aside from the story, one of the key attractions to Halo Wars 2 is the fact that the Xbox platform is finally getting another RTS. Leading the charge is the new Blitz mode, which distils the experience down to short engagements via the use of cards and deck-building. Full multiplayer skirmish modes will also be available at launch.

Who Should Get It?
Anybody with an interest in either Halo or real-time strategy, even complete beginners.

Night in the Woods

What Is It?
A crowdfunded, narrative-focused adventure dripping with charm. The game follows Mae, a college dropout who returns to her crumbling mining hometown, only to discover how much has changed and that there’s something in the woods. It mainly has players exploring and conversing with other characters, a point-and-click without the puzzles.

Night in the Woods raised its Kickstarter goal within 26 hours, ultimately reaching 400% of its target. The anthropomorphic animals, colorful palette, and pleasing music contrast deeply with its themes of “mental illness, depression, the stagnancy of the middle and lower classes, and the slow death of small-town America.”

Who Should Get It?
Anyone seeking a story that’s more heartfelt and introspective than one bursting with action. Companion mini-games Lost Constellation and Longest Night can be downloaded from the official site.

What Is It?
An open-world game in which players take on the role of a bow-wielding hunter in a post-apocalyptic setting. That may sound incredibly cliche but Horizon: Zero Dawn is one of the year’s most anticipated releases thanks to Guerilla’s breathtaking vision and research: the panoramic vistas, the soothing rustle of grass, and the majestic robots that walk the land.

Combat is a juggle between stealth and weak-point targeting, often involving traps and stripping away layers of armor. The cautious player may also hack their target, each creature-type granting a unique use. Guerilla states that the game takes place a thousand years after the fall of civilization and that we may just get to learn what happened.

Who Should Get It?
PlayStation 4 owners looking for another hot exclusive to add to their libraries.

What Is It?
The spiritual successor to the critically-acclaimed RPG Planescape: Torment, best known for its incredible storytelling and dialogue. It will use a setting and ruleset written by Monte Cook, who previously worked on Planescape; other returning staff include Chris Avellone, designer Colin McComb, and composer Mark Morgan among others.

Players take command of the “Last Castoff”, whose background and circumstances are too long for this summary (there’s a story trailer below). In any case, he or she will be joined by nine companions – three in a party – as they race in search of a god before it’s too late.

Who Should Get It?
Everyone who grew up with classic CRPGs. The isometric view and turn-based tactical combat may seem dated to some but the genre typically holds great stories and challenge.

Ade thinks there's nothing quite like a good game and a snug headcrab. He grew up with HIDEO KOJIMA's Metal Gear Solid, lives for RPGs, and is waiting for light guns to make their comeback.
Previous post Concept: Nintendo Switch VR
Next post PS Plus Feb 2017: Until Dawn, LittleBigPlanet 3, Not A Hero, and more